When voters overwhelmingly passed Measure Q in November 2010, they paved the way for signature projects at all high schools. 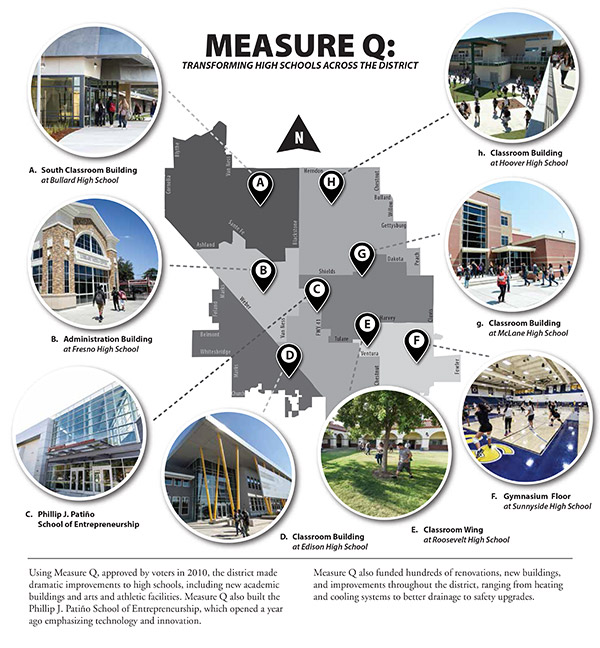 This meant highly visible renovations in every region of the district that improved the learning and teaching environments for students and staff. The district has $250 million in projects completed or underway using Measure Q funds.

For example, at Fresno High School, the outdated "bunker" buildings at the front of the school were torn down, opening up the view of historic Royce Hall. The space in front of Royce Hall was transformed into Warrior Plaza, a green area for students to gather and hold events. The architectural design of the new administration building and library/media center further complements and enhances the grandeur of Royce Hall. The two buildings include 20 classrooms.

"Measure Q changed how our high schools looked, and how our community feels about them," said Superintendent Michael Hanson. "It also gave us the opportunity to complete renovations throughout the district that meant better learning environments, increased safety and better technology."

In addition, Measure Q built the Phillip J. Patiño School of Entrepreneurship, which opened in August 2016, the first high school of its kind in the country. By the time students graduate, they will have started their own business while learning essential career and college skills in a state-of-the-art facility.

Measure Q was approved by 76% of the voters in November 2010, and authorized the issue of $280 million in general obligation bonds to offset state budget cuts, attract quality teachers, and repair/ improve/modernize classrooms by:

Along with Fresno High renovations and Patiño, significant high school projects were: