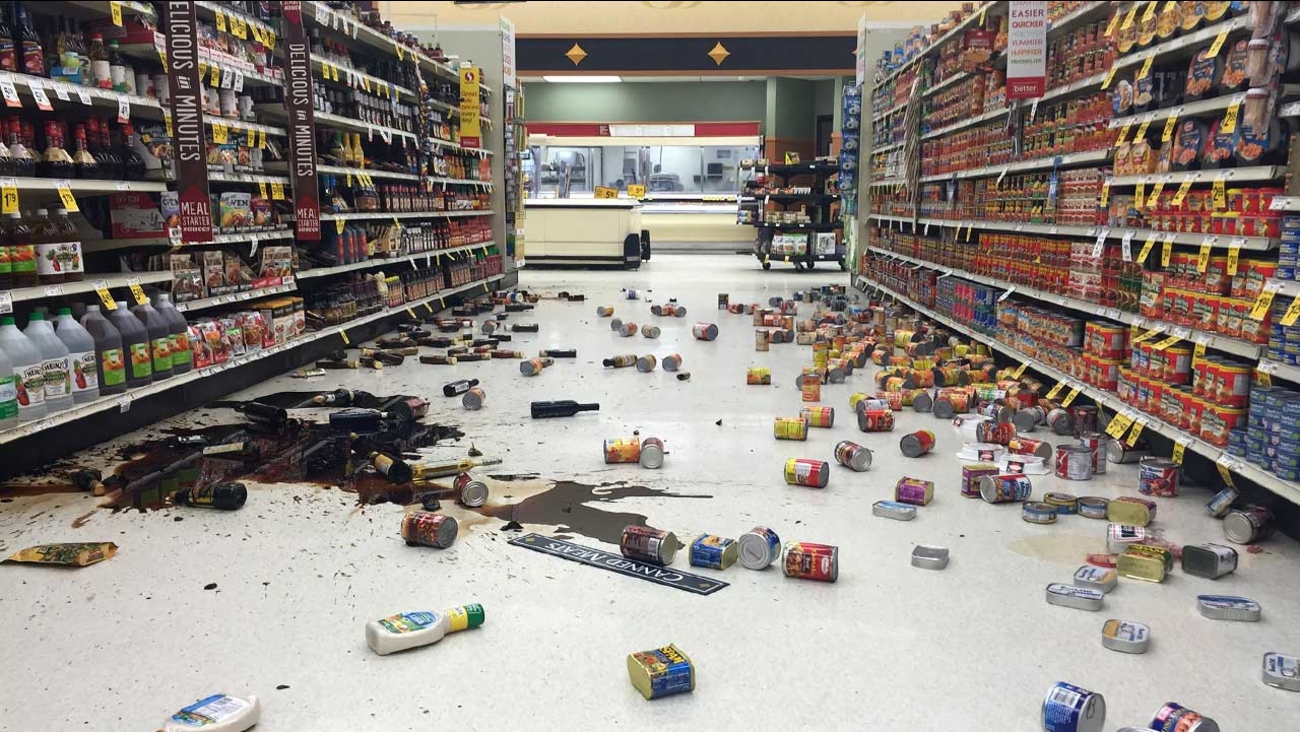 Items fallen from the shelves litter the aisles inside a Safeway grocery store following a magnitude 6.8 earthquake on the Kenai Peninsula on Sunday, Jan. 24, 2016. (Vincent Nusunginya)

ANCHORAGE, Alaska -- A magnitude-7.1 earthquake knocked items off shelves and walls in Alaska early Sunday morning, jolting the nerves of residents in this earthquake-prone region. But there were no reports of injuries.

Alaska's state seismologist, Michael West, called it the strongest earthquake in the state's south-central region in decades. Alaska often has larger or more powerful earthquakes, such as a 7.9 last year in the remote Aleutian Islands.

"However, last night's earthquake is significant because it was close enough to Alaska's population centers," West said, adding that aftershocks could continue for weeks.

The earthquake was widely felt by Anchorage residents. But the Anchorage and Valdez police departments said they hadn't received any reports of injury or significant damage.

The earthquake struck at about 1:30 a.m. Alaska time and was centered 53 miles west of Anchor Point in the Kenai Peninsula, which is about 160 miles southwest of Anchorage, according to the U.S. Geological Survey.

Vincent Nusunginya, 34, of Kenai said he was at his girlfriend's house when the quake hit.

"It started out as a shaking and it seemed very much like a normal earthquake. But then it started to feel like a normal swaying, like a very smooth side-to-side swaying," said Nusunginya, director of audience at the Peninsula Clarion newspaper. "It was unsettling. Some things got knocked over, but there was no damage."

Four single family homes in Kenai were lost to explosions or fire in the wake of the earthquake.

Two of the homes were destroyed in explosions and the other two were fully engulfed before firefighters determined it was safe enough from gas for them to enter the homes, Kenai battalion chief Tony Prior said. He said firefighters focused on keeping the flames from those homes from spreading to nearby houses.

"No injuries. Thank God," he said. "The second one was a major explosion. We're fortunate that no one was hurt."

About 30 homes were evacuated, and some people took shelter at the Kenai National Guard Armory.

Workers with the gas utility were examining the remaining homes Sunday afternoon with the goal of getting displaced residents back in their homes later in the day.

The USGS initially reported the quake as a magnitude-7.1, but downgraded shortly afterward to magnitude-6.8 before raising it back to 7.1.

"Some earthquakes have challenges associated with them, they are unusual or hard to monitor," West said. "This is neither of them. Southern Alaska is well instrumented, and this earthquake is of the style and type that we would expect in this area."

The Alaska Department of Transportation reported on its Facebook page that there was road damage near the community of Kasilof, on the Kenai Peninsula.

Alaska Gov. Bill Walker said in a statement Sunday that he was relieved there wasn't more damage. He urged all Alaskans to have a response plan for when a major natural disaster takes place.

The hashtag #akquake trended early Sunday on Twitter as people shared their experiences and posted photos of items that had fallen off walls and shelves.

Andrea Conter, 50, of Anchorage, said she was surprised by the quake's strength.

"This was a wild one," the former Southern California resident said. "I looked at the closed-circuit cameras at work and it lasted over 50 seconds and that is considerable for an earthquake."

"When I bought my house in Anchorage I had a geological map that shows what are the sturdiest parts of town and there were a few where I said, 'If there's an earthquake, that house is toast,'" Conter said. "That's how I chose my house. Literally. Drove my real estate agent nuts. But, I didn't have one thing fall in my house. It was kind of clutch."

Andrew Sayers, 26, of Kasilof was watching television when the quake struck.

"The house started to shake violently. The TV we were watching fell over, stuff fell off the walls," he said. "Dishes were crashing, and we sprinted toward the doorway."

Later, he was driving to his mother's home when he came across a stretch of road that was damaged in the quake.

"We launched over this crack in the road. It's a miracle we didn't bust our tires on it," he said.

After reaching his mother's house, Sayers checked on his grandparents, who live about a mile away.