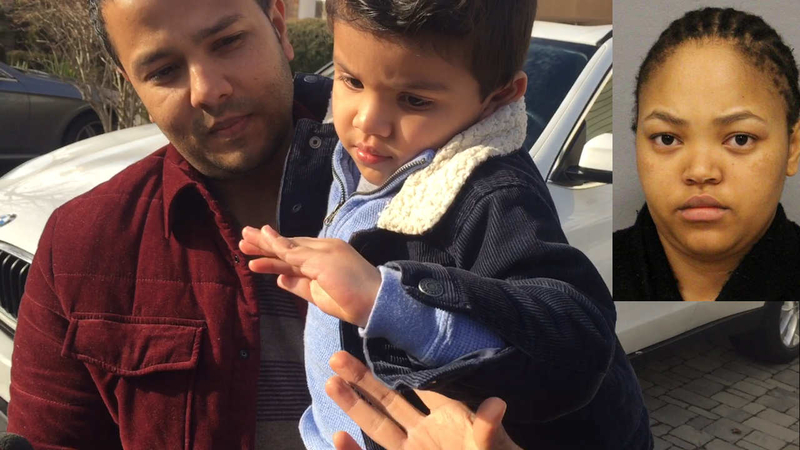 BALDWIN, Long Island -- A Long Island nanny is under arrest, accused of burning the 2-year-old boy she was watching with a curling iron, and the entire incident was caught on the homeowners' basement nanny cam.

According to detectives, Angela Persaud was bathing her son Xander in their Baldwin home when the child yelled out in pain as she touched his left hand.

She noticed that his hand was red and that the boy was in a lot of pain. When she asked what happened, authorities say the boy replied that his nanny had burned him.

"It's a little superficial burn now, but it was welted (Thursday)," Angela Persaud said. "But I think more so because it was fresh."

The mother then reviewed a home security camera video from earlier that day, which showed Nxumalo with a red curling iron that she pressed against the child's hand and leg.
EMBED More News Videos

"You see her with the curling iron, and she touches it to make sure that it's hot," Angela Persaud said. "And then when he jumps because it burns him, she continues to touch his foot again and then goes for his hand."

The parents immediately called police, and Nxumalo was taken into custody.

"You can tell that she's telling him, 'That's what happens when you don't listen,' and then she hugs him," she said. "So she's playing these warped mind games with my child, and it's the most disgusting thing I've ever witnessed in my life."

Investigators say she later admitted that she became frustrated with Xander and tried to discipline him, which Angela Persaud says it outrageous.

"They were at his desk writing letters, and after about 10 minutes of it, his attention span broke and he wanted to do something else," she said. "She got mad that he didn't want to sit and continue to do it. So she's reprimanding him...she did say, 'It was just very frustrating, and he was being bad earlier.' She said he hit her earlier. Well, he's going to be 3. You know, there's a reason why they call it 'the terrible twos.' They do that a lot...There was no way that I was going to allow that to happen. I told her immediately that I'm going to call the police."