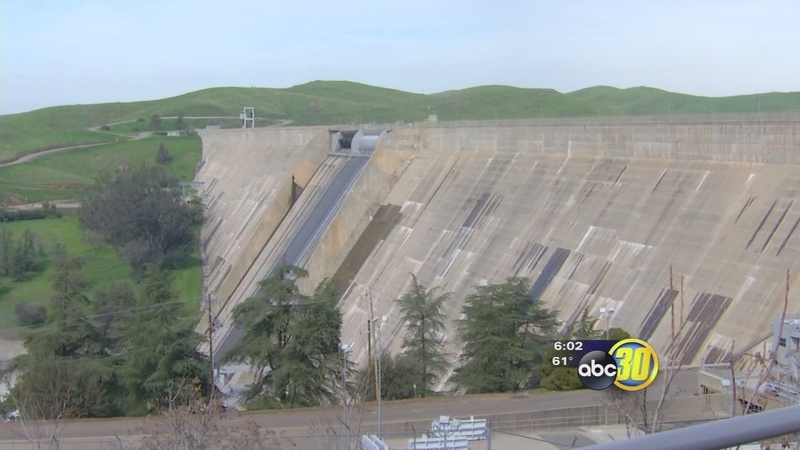 FRESNO, Calif. (KFSN) -- The crisis at the Oroville Dam and its spillways has some people in the Valley a little scared about dangers at our dams.

The swollen San Joaquin River flows away from Friant Dam filled with water washing down the 319-foot structure. But engineers say the dam is in pretty good shape.

Millerton Lake is at 85 percent of the dam's capacity right now, but the big difference between Oroville Dam and Friant Dam is concrete.
The Oroville Dam is an earth dam, essentially made out of compacted dirt.

"When you have an earth dam, you have to erode earth and that's a lot easier to do," said Bureau of Reclamation deputy area manager Duane Stroup.

The Bureau of Reclamation takes care of Friant Dam and its managers say the concrete construction is one big reason they don't need an emergency spillway or a complicated contingency plan in case of overfilling.

Stroup says even the city of Friant wouldn't have much to worry about if water releases rose above the safe level of 11,000 cubic feet per second. Communities at lower elevations, like the Wildwood Mobile Home Park, are where you'd see major flooding.

Water management expert Dr. Jay Lund says other than the Oroville Dam and a couple levees, the water systems around California seem to be working pretty well, even though it's been one of the wettest winters on record.

But he says California, like many other states, hasn't done a great job with long-term funding for flood infrastructure -- like inspections and maintenance.

"We're in some ways much better shape than we were before (Hurricane) Katrina hit back in 2005," the U.C. Davis engineering professor said. "We're much better at looking at levees and reservoirs and the like, but we still have a ways to go."