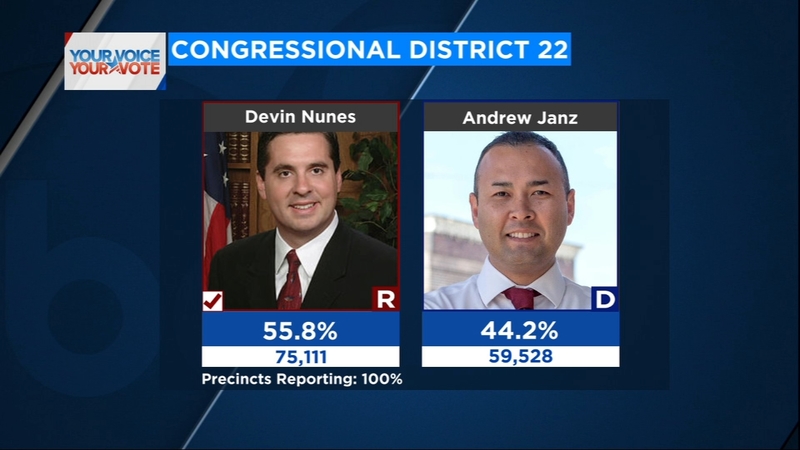 Early on election night, Congressman Devin Nunes (R-Tulare) holds a 57.5 percent lead over Fresno County prosecutor Andrew Janz who has 42.5 percent of the vote. Those numbers could change in the hours ahead as only 13 percent of precincts had been counted.

This is a high profile race, mostly because of the national attention Devin Nunes has gained. Many see his greatest strength and his greatest weakness as his support of President Trump. Many have called him the strongest ally the president has in the house.

His campaign is feeling optimistic tonight despite all the resources the Janz campaign has put in to try and unseat him. He has always carried this district by at least 61 percentage points. In the primaries, he had 58 percent of the vote versus the 31 percent Andrew Janz had.

Devin Nunes is running for his eighth term in Congress. His district is solidly Republican and he has only had nominal Democratic opposition, even running unopposed in the 2010 general election. He is hoping to carry similar numbers.

Rep. Nunes has held his seat since 2003 and serves as the chairman of the United States House Permanent Select Committee on Intelligence. According to his website, he has fought for issues like water shortages, tax reform, renewable energy, health care reform, and transportation which included redirecting federal high-speed rail funds to finance improvements to Highway 99.

As for Janz, is a deputy district attorney in Fresno County, he states on his website that if elected he will fight for water for Valley farmers. He also says he will fight to protect Social Security and Medicare, as well as tackling the issue of immigration. Janz says ICE officials should stay out of schools, hospitals and courthouses.

The two candidates have raised and spent vast amounts of money in this race. Janz raised more campaign cash during the last three months than the 8-term Congressman, roughly $1.2 million more, but Nunes had more money in the bank to start, and he still has a sizeable war chest to use in the remaining weeks until Election Day on November 6th.