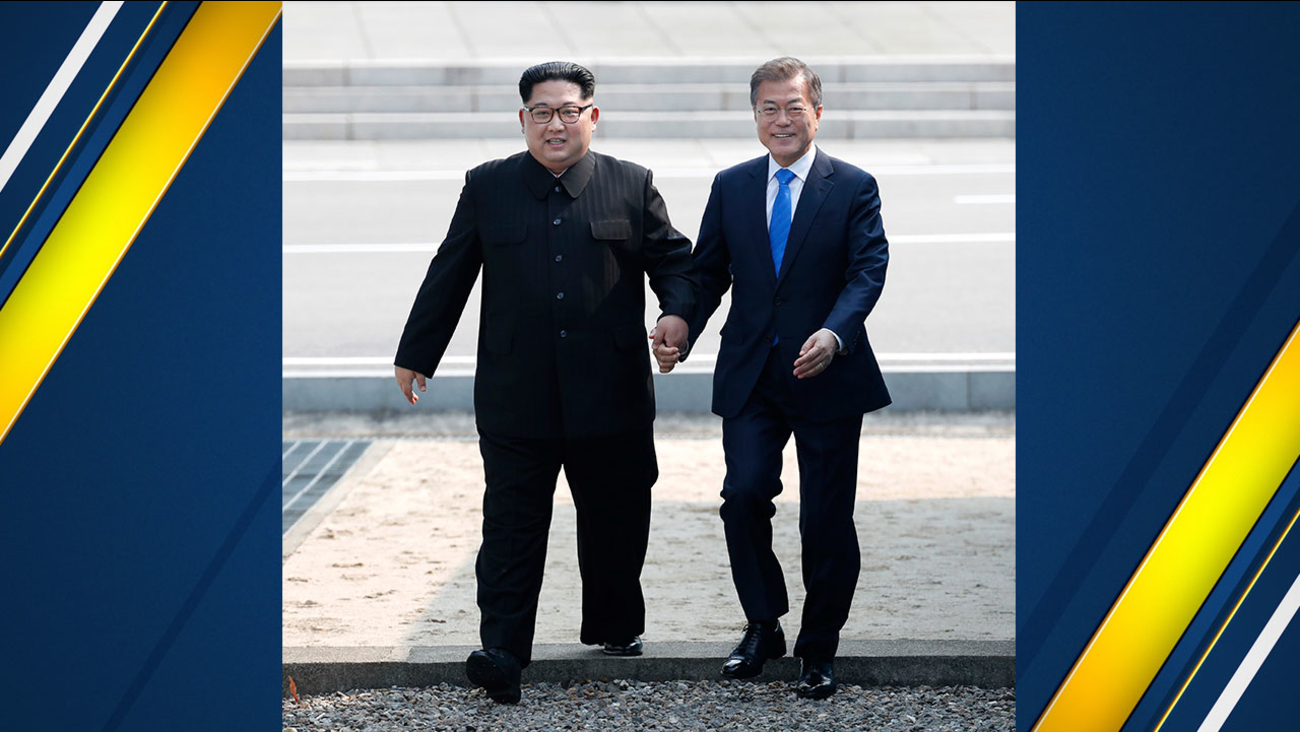 GOYANG, South Korea -- With a single step over a weathered, cracked slab of concrete, North Korean leader Kim Jong Un made history Friday by crossing over the world's most heavily armed border to greet South Korean President Moon Jae-in for talks on North Korea's nuclear weapons. Kim then invited Moon to cross briefly back into the north with him before they returned to the southern side.

Those small steps must be seen in the context of the last year - when the United States, its ally South Korea and the North seemed at times to be on the verge of nuclear war as the North unleashed a torrent of weapons tests - but also in light of the long, destructive history of the rival Koreas, who fought one of the 20th century's bloodiest conflicts and even today occupy a divided peninsula that's still technically in a state of war.

"I feel like I'm firing a flare at the starting line in the moment of (the two Koreas) writing a new history in North-South relations, peace and prosperity," Kim told Moon as they sat at a table, its precise dimension of 2018 millimeters separating them, to begin their closed-door talks. Moon responded that there were high expectations that they produce an agreement that will be a "big gift to the entire Korean nation and every peace loving person in the world."

Earlier, both leaders smiled broadly as Moon grasped Kim's hand and led him along a blindingly red carpet into South Korean territory, where school children gave Kim flowers and an honor guard stood at attention for inspection, a military band playing traditional Korean folk songs beloved by both Koreas and the South Korean equivalent of "Hail to the Chief." It's the first time a North Korean leader has crossed over to the southern side of the Demilitarized Zone since the Korean War ended in 1953.

North Korean leader Kim Jong Un has made history by crossing over to the southern side of the world's most heavily armed border to meet rival South Korean President Moon Jae-in.

Beyond the carefully choreographed surface, however, it's still not clear whether the leaders can make any progress in talks on the nuclear issue, which has bedeviled U.S. and South Korean officials for decades. North Korea's nuclear and missile tests last year likely put it on the threshold of becoming a legitimate nuclear power. North Korea claims it has already risen to that level.

North Korean leader Kim Jong Un and South Korean President Moon Jae-in inspect an honor guard during a ceremony in the Demilitarized Zone along the border between the countries.

Kim's news agency said that the leader would "open-heartedly" discuss with Moon "all the issues arising in improving inter-Korean relations and achieving peace, prosperity and reunification of the Korean peninsula" in a "historic" summit.

The greeting of the two leaders was planned to the last detail. Thousands of journalists were kept in a huge conference center well away from the summit, except for a small group of tightly-controlled pool reporters at the border. Moon stood near the Koreas' dividing line, moving forward the moment he glimpsed Kim, dressed in dark, Mao-style suit, appearing in front of a building on the northern side. They shook hands with the border line between them. Moon then invited Kim to cross into the South, and, after he did so, Kim grasped Moon's hand and led him into the North and then back into the South. They took a ceremonial photo facing the North and then another photo facing the South.

Two fifth-grade students from the Daesongdong Elementary School, the only South Korean school within the DMZ, greeted the leaders and gave Kim flowers. Kim and Moon then saluted an honor guard and military band, and Moon introduced Kim to South Korean government officials. Kim returned the favor, introducing Moon to the North Korean officials accompanying him. They then took a photo inside the Peace House, where the summit was to take place, in front of a painting of South Korea's Bukhan Mountain, which towers over the South Korean Blue House presidential mansion. Kim's sister, Kim Yo Jong, was by his side throughout the ceremony, handing him a pen to sign a guestbook, taking the schoolchildren's flowers from his hand and scribbling notes at the start of the talks with Moon.

Nuclear weapons will top the agenda, and Friday's summit will be the clearest sign yet of whether it's possible to peacefully negotiate those weapons away from a country that has spent decades doggedly building its bombs despite crippling sanctions and near-constant international opprobrium.

Expectations are generally low, given that past so-called breakthroughs on North Korea's weapons have collapsed amid acrimonious charges of cheating and bad faith. Skeptics of engagement have long said that the North often turns to interminable rounds of diplomacy meant to ease the pain of sanctions - giving it time to perfect its weapons and win aid for unfulfilled nuclear promises.

Advocates of engagement say the only way to get a deal is to do what the Koreas will try Friday: Sit down and see what's possible.

The White House said in a statement that it is "hopeful that talks will achieve progress toward a future of peace and prosperity for the entire Korean Peninsula. ... (and) looks forward to continuing robust discussions in preparation for the planned meeting between President Donald J. Trump and Kim Jong Un in the coming weeks."

Moon, a liberal whose election last year ended a decade of conservative rule in Seoul, will be looking to make some headway on the North's nuclear program in advance of a planned summit in several weeks between Kim and U.S. President Donald Trump.

Kim, the third member of his family to rule his nation with absolute power, is eager, both in this meeting and in the Trump talks, to talk about the nearly 30,000 heavily armed U.S. troops stationed in South Korea and the lack of a formal peace treaty ending the Korea War - two factors, the North says, that make nuclear weapons necessary.

North Korea may also be looking to use whatever happens in the talks with Moon to set up the Trump summit, which it may see as a way to legitimize its declared status as a nuclear power.

One possible outcome Friday, aside from a rise in general goodwill between the countries, could be a proposal for a North Korean freeze of its weapons ahead of later denuclearization.

Seoul and Washington will be pushing for any freeze to be accompanied by rigorous and unfettered outside inspections of the North's nuclear facilities, since past deals have crumbled because of North Korea's unwillingness to open up to snooping foreigners.

South Korea, in announcing Thursday some details of the leaders' meeting, acknowledged that the most difficult sticking point between the Koreas has been North Korea's level of denuclearization commitment. Kim has reportedly said that he wouldn't need nuclear weapons if his government's security could be guaranteed and external threats were removed.

Whatever the Koreas announce Friday, the spectacle of Kim being feted on South Korean soil will be something to behold.

Kim and Moon will be enjoying each other's company in the jointly controlled village of Panmunjom near the spot where a defecting North Korean soldier recently fled south in a hail of bullets fired by his former comrades.