President Trump stalks out of meeting with Democrats, while NY lawmakers vote to allow release of Trump's state tax returns 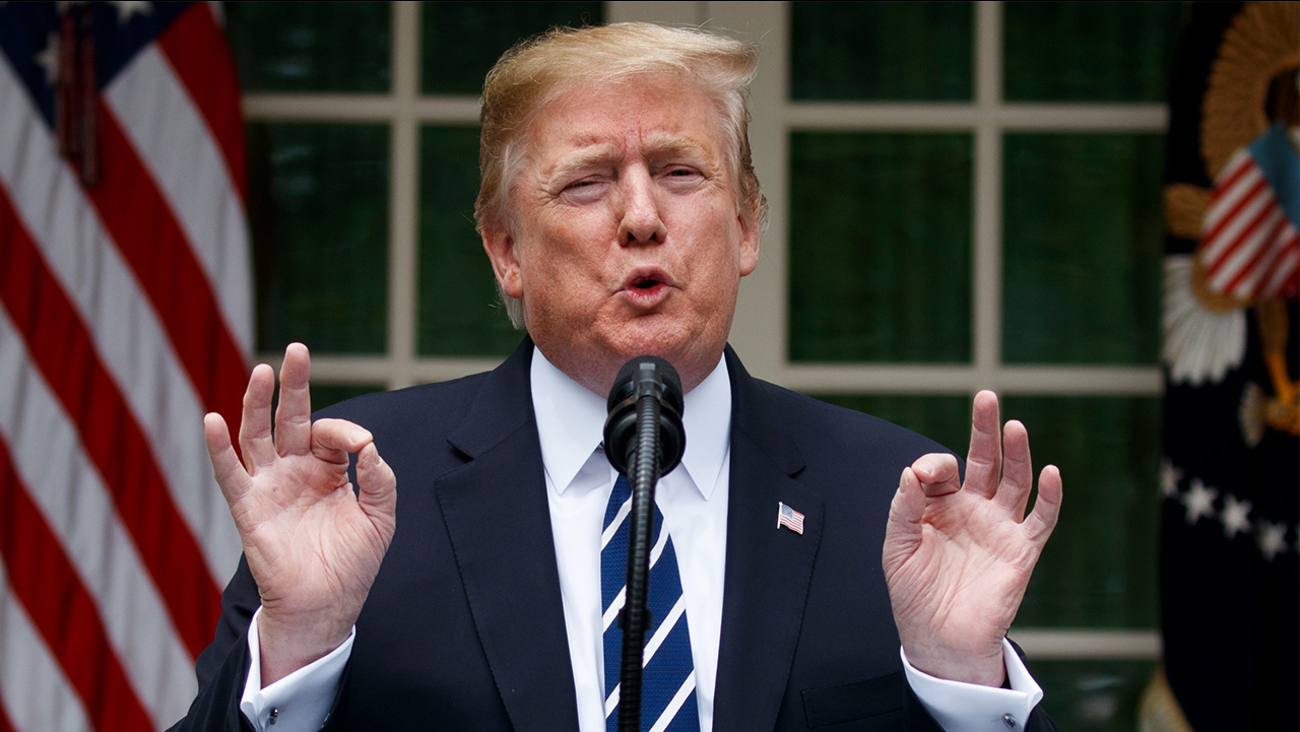 President Donald Trump delivers a statement in the Rose Garden of the White House, Wednesday, May 22, 2019, in Washington. (Evan Vucci)

President Donald Trump abruptly stalked out of a meeting with congressional leaders Wednesday with a flat declaration he would no longer work with Democrats unless they drop all investigations in the aftermath of the special counsel's Trump-Russia report. Hours later, New York lawmakers voted to allow Congress access to his state tax returns.

At the White House. Democrats said the walkout seemed scripted. House Speaker Nancy Pelosi called it all "very, very, very strange" and said she was praying for Trump and the nation.

After turning and leaving the three-minute non-meeting with the Democratic leaders, scheduled for a discussion of U.S. infrastructure problems, Trump strode to the Rose Garden where aides had gathered reporters and TV cameras for his demand that Congress drop its investigations that are increasingly leading to talk of what he called the "i-word" -- impeachment.

Trump assailed Pelosi in particular for her comment earlier in the morning on Capitol Hill that she believed the president was engaged in a "cover up" of the Russia probe.

Trump said, "I walked into the room and I told Leader Schumer and Speaker Pelosi I want to do infrastructure," referring to the top Democratic senator, New York's Chuck Schumer.

"But you know what we can't do it under these circumstances," Trump said. "So get these phony investigations over."

The president didn't shake anyone's hands or take a seat, but spent three minutes contending he had been prepared to work on infrastructure, trade and other issue but now he couldn't because Pelosi said "something terrible," according to an administration official and another person familiar with what happened in the room. Trump then left before anyone else could speak.

Pelosi said to those still in the room - no Republican lawmakers were there - that she had known the president was not serious about infrastructure and would find a way out, according to another person familiar with the meeting.

Pelosi, flanked by Schumer and other House and Senate leaders, said the Democrats had gone to the White House "to give this president the opportunity to have a signature infrastructure initiative." She said she would be praying for the president.

Trump tweeted back: "and Nancy, thank you so much for your prayers. I know you truly mean it."

The meeting at the White House had been set weeks ago, after Trump and the Democratic leaders agreed to talk further about a possible $2 trillion infrastructure proposal. Trump was due to provide the Democrats his ideas on how to pay for it. Schumer said when Trump "was forced to say how he would pay for it he had to run away."

Despite the sudden turn of events, the outburst followed a familiar script of Trump convening leaders at the White House only to try to turn the tables and refocus attention. He has stormed out of previous sessions.

Earlier Wednesday, Pelosi told reporters after a private meeting of House Democrats that Trump is "engaged in a cover up," even as she tried to tamp down some Democrats' rush toward an impeachment inquiry in their showdown with the White House.

Hours after the drama played out in Washington, New York lawmakers gave final passage to legislation that would allow President Donald Trump's state tax returns to be released to congressional committees that have, so far, been barred from getting the president's federal filings.

The Democrat-led Senate and Assembly both approved the measures Wednesday, sending them to Gov. Andrew Cuomo, a Democrat. A spokesman has said the governor supports the principle behind the legislation but will review the bill carefully before deciding whether to sign it.
The legislation doesn't target Trump by name, but it would allow the leaders of the U.S. House Ways and Means Committee, the Senate Finance Committee or the Joint Committee on Taxation to get access to any New York state tax returns filed by elected officials and top appointed officials. The legislation would apply to personal income tax returns, as well as business taxes paid in New York.

An earlier version of the proposal passed the state Senate two weeks ago that would have allowed congressional committees to get any New Yorker's returns, regardless of whether they held public office. Lawmakers later narrowed the legislation to address concerns that it went too far, prompting the Senate to hold a second vote on the new language Wednesday.

New York Republicans have railed against the bill. John Flanagan, who leads the Senate GOP, called the legislation "troubling" and "bad public policy."

The proposed changes to state law were made amid a battle going on in Washington over Trump's federal returns.

Treasury Secretary Steven Mnuchin has said he wouldn't comply with a congressional subpoena seeking six years of Trump's tax returns, in part because the request "lacks a legitimate legislative purpose." U.S. Rep. Richard Neal, D-Mass., chairman of the House Ways and Means Committee, has threatened to go to court to get the administration to comply.

Much of the information on Trump's state returns would mirror the information included on a federal return, giving the Democrats a potential end-run around the IRS, if they wished to take it.
With New York being Trump's home state and headquarters of many of his business enterprises, the legislation could give Democrats access to the president's state tax returns at a time when the White House and Democrats who control the House continue to wrangle over the president's federal tax returns.

Democrats are seeking six years of Trump's personal and business tax returns to aid a committee investigation into whether the IRS is doing its job properly to audit a sitting president and whether the law governing such audits needs to be strengthened.

If Congress does request and obtain Trump's state tax returns, that doesn't mean the public gets to see them. Under federal law, the confidential information in the returns is supposed to be for the committee's eyes only.

The New York bills have no time limitation on the tax filings that could be shared with Congress. They require that the returns be requested "for a specified and legitimate legislative purpose," wording that could ostensibly give state officials the ability to refuse some requests they felt were primarily political in nature.

The New York bills would become law immediately upon being signed by Cuomo, though it could be delayed by a court challenge.
Report a correction or typo
Related topics:
politicsalbany
Copyright © 2021 by The Associated Press. All Rights Reserved.
TOP STORIES
2 accused in deadly shooting at Hilmar restaurant arrested
Major outage hits Amazon Web Services; many sites affected
'Political free-for-all' as Rep. Nunes leaves House of Representatives
50 mutations in omicron could be its downfall, data shows
Biden to warn Putin of economic pain if he invades Ukraine
2 arrested for string of business burglaries in Merced
Tulare Co. deputies investigating armed robbery at Delano gas station
Show More
Clovis Navy test pilot is one of NASA's new astronauts
Devin Nunes stepping down from Congress by end of 2021
Police investigating theft of decorations on Clovis' Candy Cane Lane
Authorities identify 4 killed in plane crash near Visalia airport
Why feds are warning it could take months to get a passport
More TOP STORIES News