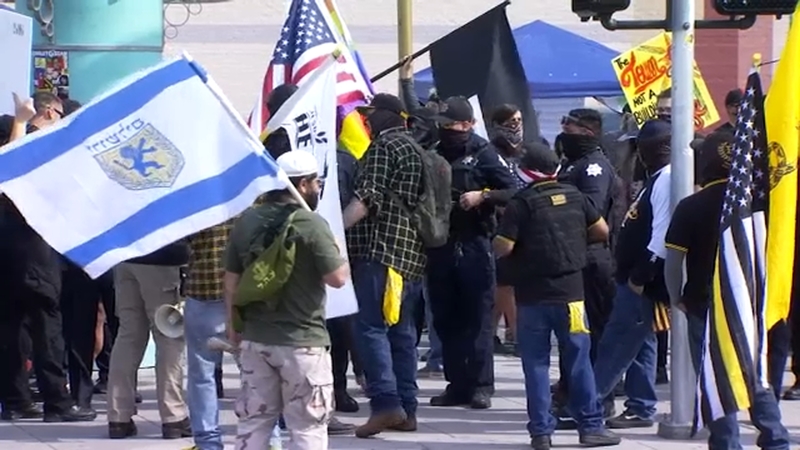 FRESNO, Calif. (KFSN) -- Fresno city leaders are coming up to Tower Theatre protests this weekend and the police are coming too, but with new tactics.

Police say months of protests have been peaceful whenever it's just local folks protesting against the sale of the Tower Theatre to Adventure Church, but things get dicey when counterprotesters insert themselves into the mix.

Officers arrested two people at the most recent protest and Chief Paco Balderrama says he believes both men were Proud Boys.

The right-wing extremist group with ties to white nationalism has showed up in opposition to local protesters who want to keep the theater from becoming a church.

"They come wearing tactical vests, carrying knives, carrying mace," said Jaguar Bennett, a protest organizer with the group Save the Tower Demonstration Committee. "They are there to look as intimidating as possible."

A police force of six grew to 30 Sunday and they still struggled to keep the peace.

A pregnant woman got knocked to the ground by a Proud Boy in the middle of the scrum.

So police will change their approach to the protests starting this Sunday.

"We're not going to allow this protest, these protests, to escalate to where someone is seriously injured," Dyer said. "Enough is enough."

Councilmember Miguel Arias says city leaders have tried to avoid public appearances at the protests to stay out of the legal battle between the theater's owners, the church, and the owners of Sequoia Brewing.

But Arias, Dyer, and the police chief will all be there this weekend to monitor the situation.

The new plan includes having bicycle officers ready to escort people away to safety and installing physical barriers between protesters and counterprotesters.

Chief Balderrama says he'll get a firsthand view to know if they need to keep up the same measures in the coming weeks.

"People should be able to assemble, to protest, to speak freely -- freedom of speech -- and not have the fear of being assaulted of being intimidated," he said. "So that's where we want it to get to, but until it does the Fresno Police Department's going to be there."

One way the process could speed up is in court where an appellate court could soon rule on whether the theater's owners should be allowed to sell to the church or if Sequoia should be able to buy the entire property.
Report a correction or typo
Related topics:
fresnoprotestfresno downtownfresno police department
Copyright © 2021 KFSN-TV. All Rights Reserved.
More Videos
From CNN Newsource affiliates
TOP STORIES