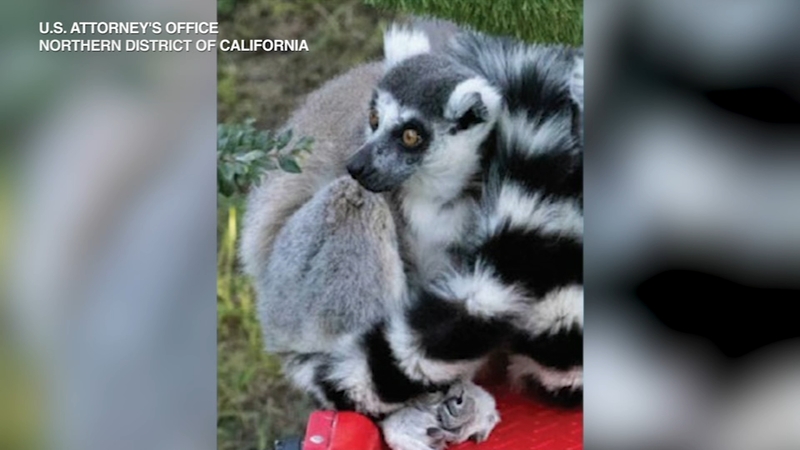 SAN FRANCISCO -- A California man accused of stealing a rare lemur from the San Francisco Zoo could spend up to one year behind bars for violating the Endangered Species Act, federal prosecutors said Monday.

Cory John McGilloway, 31, of Los Angeles, allegedly kidnapped a 21-year-old male ring-tailed lemur named Maki from the San Francisco Zoo's Lipman Family Lemur Forest on Oct. 13, 2020, according to prosecutors. Maki was reported missing the next morning and investigators discovered evidence of a forced entry to his enclosure, triggering a frantic search for the animal, which zoo officials described as "highly endangered" and requiring "special care." The zoo, which is home to just four ring-tailed lemurs, also announced a $2,100 reward for information leading to Maki's safe return, ABC News reported.

Two days after the alleged theft, a woman recorded video of a man -- whom prosecutors believe is McGilloway -- walking a lemur -- thought to be Maki -- on a leash on Treasure Island, about two miles off San Francisco's mainland shore. Later that day, a 5-year-old boy spotted Maki unattended at a playground in Daly City, about 10 miles southwest of San Francisco. The lemur, who was hungry, dehydrated and agitated, was rescued and returned to the San Francisco Zoo, prosecutors said.

That night, police arrested McGilloway in San Rafael, about 18 miles northwest of San Francisco. Police were responding to a report of shoplifting when they allegedly saw McGilloway driving a stolen dump truck, according to prosecutors.

McGilloway made an appearance at the U.S. District Court for the Northern District of California via video link from a Los Angeles jail on Monday. He was arraigned on one misdemeanor count of violating the Endangered Species Act, a federal offense. If convicted, he could have to pay as much as $50,000 in fines in addition to facing up to a year in prison.

SEE MORE: 'Why would anyone want a lemur?': Male ringtail likely stolen from San Francisco zoo

ABC News has reached out to McGilloway's public defender for comment.

Native to Madagascar, the world's second-largest island nation, ring-tailed lemurs are listed as "endangered" on the International Union for Conservation of Nature's (IUCN) Red List of Threatened Species. Almost a third of all lemur species in Madagascar, located off Africa's southeast coast, are considered "critically endangered" -- just one step away from extinction -- with 103 of the 107 surviving species threatened with extinction, mainly due to deforestation and hunting, according to the IUCN.