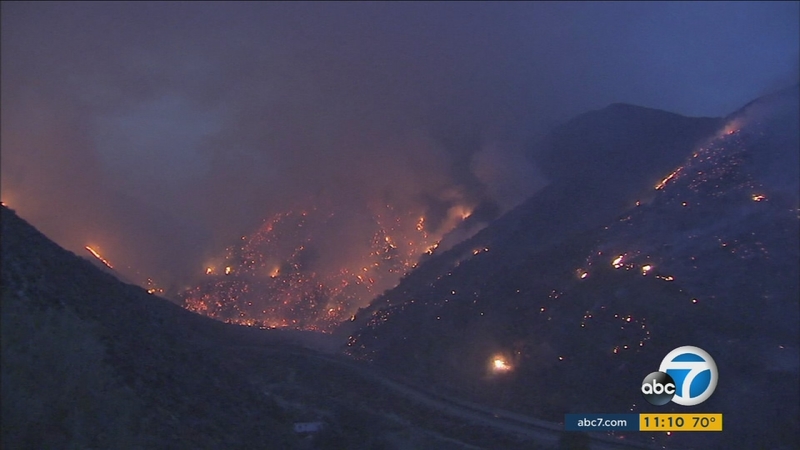 Torlakson, the state superintendent of public instruction, is acting governor while Gov. Jerry Brown and other officials are in Philadelphia for the Democratic National Convention.

The order authorizes additional state personnel and equipment to help firefighters. It also provides a range of assistance to fire victims, such as the waiver of state fees for lost documents and faster processing of unemployment insurance applications and other state benefits.

Torlakson issued a similar emergency order for Monterey County, where the Soberanes Fire has burned through more than 20,000 acres in four days.

The Sand Fire, last estimated at 37,701 acres was listed at 25 percent containment on Tuesday. Many of the residential evacuations had been lifted.

Nearly 3,000 firefighters from multiple agencies are working to quell the massive blaze, which started Friday afternoon along the northbound 14 Freeway near Sand Canyon.

Many of the remaining flames on Tuesday were burning in higher elevations of the Angeles National Forest, south of Agua Dulce and farther away from homes.

"You saw this fire burn 10,000 acres a day for three days, and that can certainly happen again," said Marc Peebles, public information officer with SoCal Incident Management Team 3. "With only 25 percent containment, we still have 75 percent of the 37,000-plus acre fire that is unsecured."

The blaze quickly grew, charring thousands of acres each day and prompting evacuations for about 20,000 residents.


But by Monday night, a majority of those residents were allowed to return home.

The body of a man, who coroner officials said refused to evacuate an area, was found inside a car in the 26700 block of Iron Canyon Road Saturday night. The coroner identified him Tuesday as 67-year-old Robert Bresnick.

Since the fire started, 18 homes in Sand Canyon, Bear Divide and Little Tujunga were destroyed, but thousands more were protected.

The Los Angeles County Department of Public Health also issued an air quality advisory for the Santa Clarita, Antelope and San Gabriel valleys as well as the San Gabriel Mountains area. The advisory was expected to stay in effect at least until midnight Wednesday.

#SandFire Update* Residents and Media can now call 626-574-5208 to get Sand Fire updates throughout the day. #lacofd #lasd #ANF

About 770 large animals were in the care of Los Angeles County Animal Care and Control. Small animals can go to Hart High School and Highland High School.