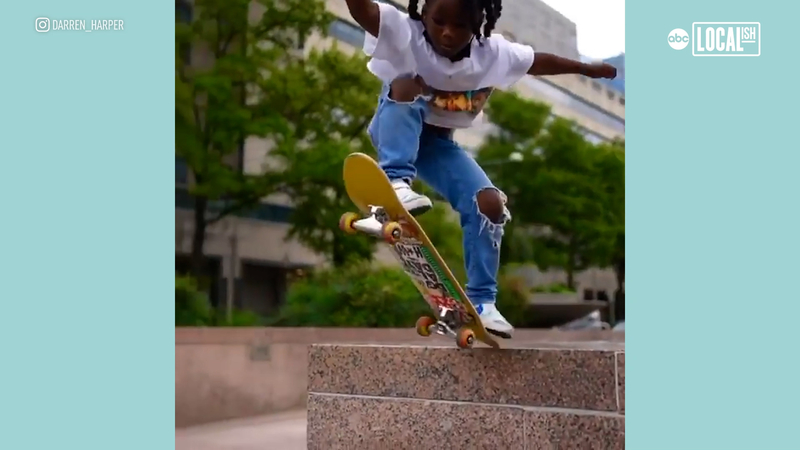 WASHINGTON -- Skateboarding legend Darren Harper and his daughters, Tink and Demi, have become viral sensations thanks to their impressive online videos documenting their skateboarding journeys.

Darren, who refers to himself as the "Obama of Skateboarding," has been a long-time fixture of the Washington D.C. skating scene and is widely recognized as one of the first prominent Black skaters. "I started skating when I was about eight or nine years old," Harper says. "I picked up a board when I was living in a low-income neighborhood in Southeast D.C." Harper credits skateboarding with helping him escape the drugs and violence that surrounded him and says the sport encouraged him to forge a better future for himself as a teen.

In October 2021 one of Harper's videos caught the attention of skateboarding icon Tony Hawk, who reposted the clip on his Instagram and applauded Harper as "next level." A few months later, Harper, Tink, and Demi were shocked to receive an invitation to meet Hawk for dinner!

For Harper, it was a dream come true. As a teen, he says his peers idolized athletes like Michael Jordan or Deion Sanders, but his own hero was always Tony Hawk. "He is the reason pretty much why I kept continuing to push and who saved me," he added.

Harper plans to continue sharing the videos of his daughters skateboarding online and hopes Tink and Demi follow in his footsteps of professional skating. "The girls love it and will continue to strive for greatness," he says. "I would love to see them in the Olympics hopefully, if not, I still want to see them take over and be a household name in skateboarding."
Report a correction or typo
Related topics:
washingtonchicagofresnosan franciscolos angelesnew yorkphiladelphiahoustonraleighwashington d.c.localishskateboarding
LOCALISH
Montessori Academy founder celebrated after 56 years on the job
AIDS Memorial Quilt: 35 years of love, activism and legacy.
Renovations are announced for this 100-year-old LGBTQ+ landmark
Inside Herr's contest to pick Philadelphia's new potato chip flavor
TOP STORIES
Tax refunds for CA: Here's what's included in new relief package
Man killed in early morning shooting in Atwater, police say
Target, Walmart weigh paying you not to bring back unwanted items
Visalia police searching for missing 72-year-old woman
Nelson Esparza dropping defamation lawsuit against Garry Bredefeld
Explosion at popular Fresno food truck injures 2, including minor
Lake Kaweah updates 'no wake zone' after dock failure caused by storms
Show More
Fowler Ave. from Olive to Clinton to be closed until September
SCOTUS sides with football coach who wanted to pray on the field
Tips to keep your dogs safe during Valley triple-digit heat
Valley Animal Center rescues sweet dog abandoned by her 3rd family
Ampersand Ice Cream's newest Fresno store is finally open!
More TOP STORIES News