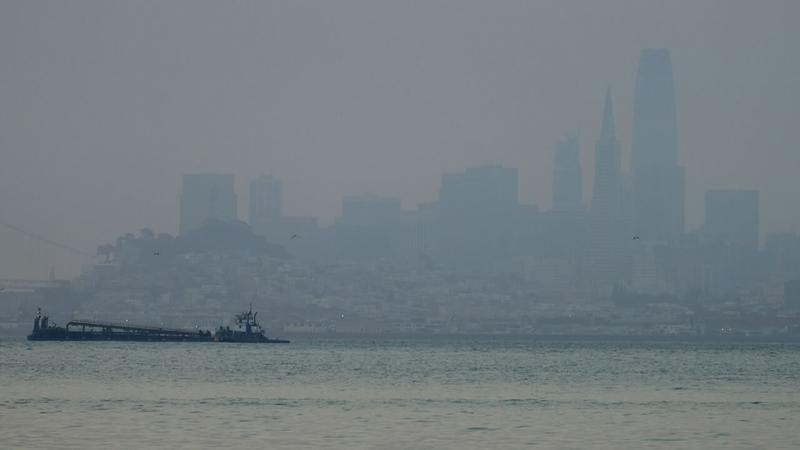 Poor air quality and smoke remain in forecast until Sunday

SAN FRANCISCO -- Air quality in the Bay Area, particularly along the Peninsula, was the worst in the world Wednesday, as smoke from wildfires blows over the region.

The PurpleAir map below shows real-time air quality readings around the Bay Area. On Wednesday, a thick band of purple AQI readings along San Mateo County, from Millbrae and San Mateo, down into western Santa Clara County. On Thursday morning, things were looking a bit better on the Peninsula, but far worse in the East Bay.

INTERACTIVE MAP: Track wildfires across Central California and the state with this interactive map

Even if you're seeing "green" readings on the map now, air quality is expected to remain bad through Sunday.

"Some parts of the bay, as we talked about, cooled off and cleaned out temporarily this morning, but don't let your guard down. It's going to get worse in a lot of areas," said ABC7 News Meteorologist Mike Nicco Thursday.
Three major wildfire complexes in the East Bay, North Bay and southern Peninsula continue to blow smoky air over nearly the entire region.

"The marine layer could bring us some improvement in San Francisco and the coast, said Nicco. "The North Bay is not quite as bad as the rest of us today because the winds are coming out of the northwest and southeast," said Nicco.

San Francisco Mayor London Breed and other health officials gave an update on air quality in the city on Wednesday afternoon.

Mayor Breed said as of Wednesday afternoon, air quality was "red," meaning it's unhealthy to breathe. She urged all San Francisco residents to stay home if they can. "The best thing you can do is avoid exposure to outdoor air by staying indoors with the windows and doors closed."

RELATED: Smoky skies cause air quality concerns in the Valley

Health official Mary Ellen Carroll added, "Our response levels for poor air quality will vary depending on the amount or impact of smoke particles in the air. If the situation get worse, our response levels will increase."

She also said steps are being taken to help unhoused residents. "If the air quality in San Francisco remains unhealthy or gets worse, we are prepared to respond by protecting the most vulnerable." Carroll said the city will distribute personal protective equipment, including N95 respirators, to the unhoused and outdoor city workers.

Carroll says the air quality index level has been fluctuating back and forth between orange and red. If the air quality hits purple, clean air centers will be set up, focusing in areas of highest need.

This poor air quality isn't new to San Francisco. In 2018, following the Camp Fire, air quality was also severely impacted in the city.