KFSN
By Sara Sandrik
FRESNO, Calif. (KFSN) -- Many of the traditional sounds and sights filled Merced's Courthouse Park on this Memorial Day, including a gun salute that returned for the first time in six years.

But only a handful of people participated in the ceremony. Organizers from the Veterans of Foreign Wars Post 4327 say they did not publicize it in order to prevent a large crowd from gathering.

Navy veteran John Saenz says, "We have less than 10 people, and we're outdoors and so many feet apart."

Saenz says he has friends who have been hospitalized with COVID-19 so he takes the threat of the virus very seriously.

But it was important to still honor the local service members who made the ultimate sacrifice.

David Babb of Tulare honored veterans on Memorial Day with a "Taps" performance.

He explains, "My dad was in World War II, and I was in Vietnam, and it's just a remembrance and a salute to all our veterans that did what they had to do."

Among the small group of spectators were Ron Scanlon and his wife, Diana. The couple has voluntarily tended to these monuments for the past 20 years in honor of Ron's brother, Butch, who was killed while serving in Vietnam on August 8, 1970.

Scanlon says, "Memorial day is like every day for me and my sister. We live it every day of our lives. It's kind of something you never get over."

Scanlon's son also created special gold stars that were added to the memorial in honor of the families who lost their loved ones in the line of duty. He's thankful this ceremony still took place, despite the pandemic.

He says, "We live on, the memory is still there. We have to live with this COVID-19, and it's really awesome that they did come out this year to do this."

The VFW organizers say they hope to host this event again next year, but with many more people in attendance.
Report a correction or typo
Related topics:
societymercedmercedveteransmemorial day
Copyright © 2020 KFSN-TV. All Rights Reserved.
MEMORIAL DAY 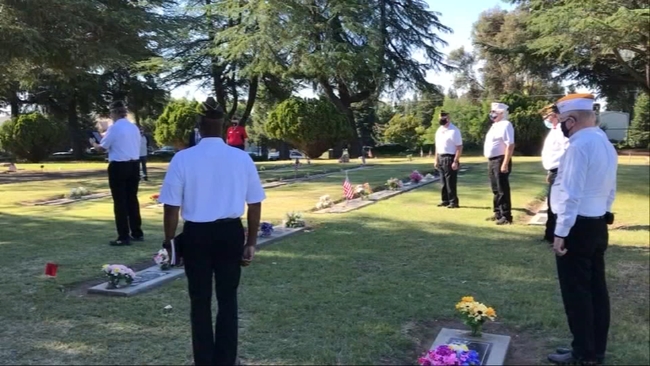