Answering the biggest questions for the final month 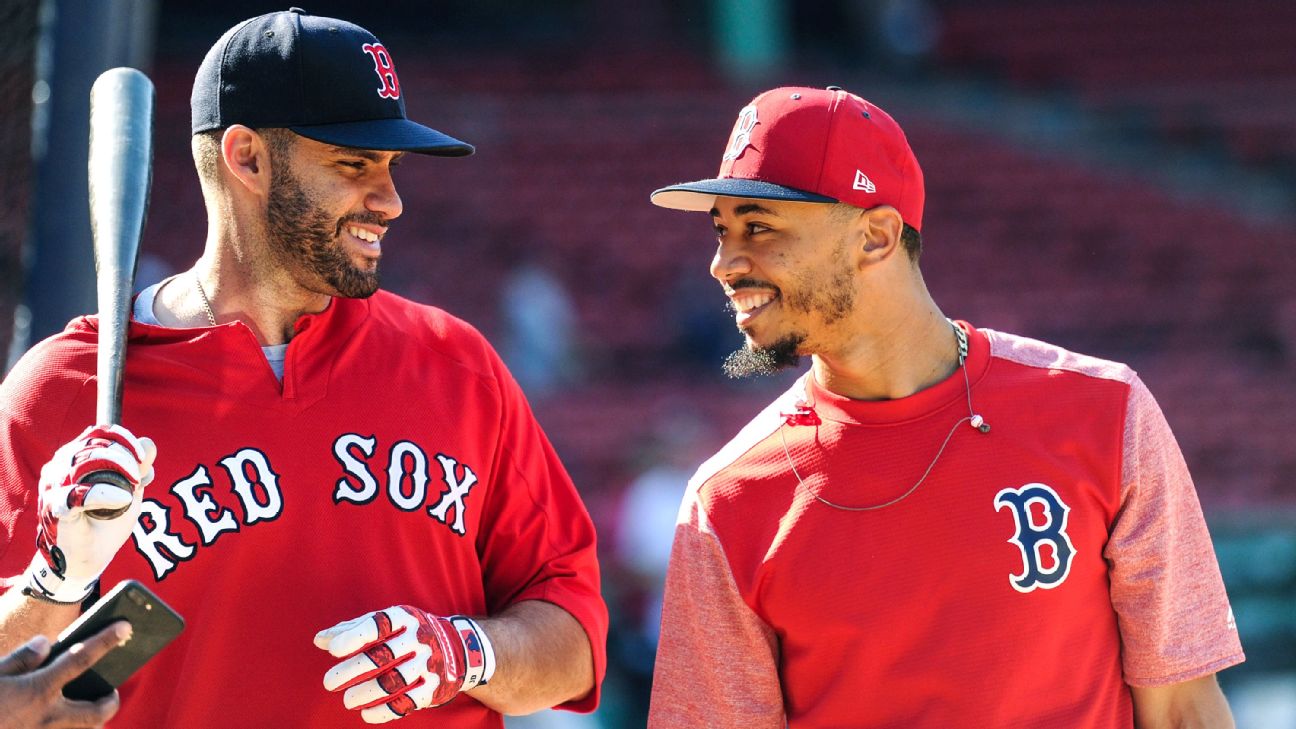 With less than a full month of action left, we asked David Schoenfield and Bradford Doolittle of ESPN.com and Sarah Langs of ESPN Stats & Information to share their thoughts on what September will have on tap for fans as the regular season winds down. We asked them about who's riding high in the standings and which teams have been -- and might continue to be -- surprising, which races demand your attention and which players are in the running for either some major hardware or historic notoriety before we turn the page on the 2018 campaign and gear up for the postseason.

What's the first thing that jumps out to you in the standings right now?

Sarah Langs: The differences between the American League and the National League. There's only one divisional race left in the AL, and it seems like we do finally know who the five teams will be given how the Seattle Mariners have fallen off. In the NL, it still feels like anybody's guess.It wouldn't surprise me if all three current leaders are atop their divisions at the end of the season, though it also wouldn't surprise me if one or two fall short.

David Schoenfield: Well, the Baltimore Orioles are 54 games out of first place! Aside from the that, it has to be the three-team NL West race, which has been a dogfight for two-plus months now. Nobody has held a lead of more than two games since July 1, when the Arizona Diamondbacks led by 2 games. The teams play each other a bunch in September, so it's going to be an exciting final month. May the baseball gods give us a three-way tie.

Bradford Doolittle: The Boston Red Sox and Chicago Cubs both have some separation between themselves and every other team in their respective leagues. Obviously there are many roadblocks from here to a Fenway Park-Wrigley Field World Series, but it's currently the most likely Fall Classic matchup. It's the series we thought we'd get back in 2008.

Which pennant race are you most excited to watch over the final month?

Langs: Can I pick two? They're related -- the NL West and NL wild card. We have three teams within fewer than two games in the NL West, and five teams within fewer than four games in the NL wild card. Whether that's because there are a bunch of mediocre teams that are middling or a bunch of good teams all on each other's level remains to be seen, but it'll make for a fun final few weeks. We could end up with three West teams in the playoffs again like last year. Or we could get one. And the Dodgers have their division-winning streak on the line -- if they win it this year, that would be their sixth straight NL West title, the third-longest such streak since divisions came into existence in 1969.

Schoenfield: Oops, I just wrote about the NL West. The AL West race is just as fascinating given Oakland's surprising surge since mid-June. The A's were 34-36 on June 15, 11 games behind the Astros, but have gone 49-20 since then. They may have not a roster full of All-Stars like the Astros, but Matt Chapman should be part of the MVP discussion, Khris Davis is hitting bombs and the bullpen has been lights out. The teams don't play each other again, however, so this race will involve a lot of scoreboard watching.

Doolittle: The NL West race -- right now -- looks tantalizing. That L.A.-Arizona series over the weekend was a joy to watch -- terse, tense, low-scoring, with dramatic finishes. What happens the next time anArchie Bradley situation occurs against the Dodgers and Matt Kemp is scheduled to hit? That's not to ignore the Colorado Rockies, who on paper shouldn't be in this mix but find themselves very much smack in the middle of it.

Which team are you most surprised is still in contention heading into the final weeks of the season?

Schoenfield: Based on preseason predictions, probably the A's, but remember that the Nationals were heavy favorites in the NL East. The Braves and Phillies don't feel like surprises because they've been up there all season, but both teams have arrived a year early. The Braves, with their plus-97 run differential, feel like the bigger surprise to me because of how well they've played all season. They're a good team with a very bright future.

Doolittle: The Tampa Bay Rays! I mean, their playoff odds are currently at 3.4 percent, so I'm stretching the definition of contention, but this team is 11 games over .500 and has been the AL's hottest club for about 10 days now. The Rays are seven games behind Oakland in the loss column and the A's have an easier finishing schedule. But Tampa Bay has quietly been one of this season's great stories, and Blake Snell has come into his own as one of the AL's top pitchers.

Which team's place in the standings is most disappointing?

Langs: It's hard to go with anyone other than the Nationals, given that they were a popular NL pennant pick entering the year, if not World Series winner. (Check the tape, I picked them to lose in the World Series this year.) This was not exactly the sendoff that they would have wanted to give Bryce Harper in his contract year. Lest we forget: In that same division, there's a team that started 11-1 in the Mets. The lowest winning percentage by any team to start 11-1 or better through 12 games is .457 by the 2002 Indians. That Indians team is the only one to finish a season below .500 after starting 11-1 or better through 12 games. The Mets closed Monday at .453.

Schoenfield: Nationals. The story of the 2012-2018 Bryce Harper/Stephen Strasburg/Max Scherzer (he joined in 2012) Nationals will thus read this way: not a single playoff series victory.

Doolittle: I'm kind of sick of being disappointed in the Nationals, so I'll go with the Phillies. It's noble that they decided to go all-in this season with so many veteran acquisitions, but when you're talking about a mostly young team having its first breakthrough, adding so many declining players can sap the dynamism out of a pennant chase. That's especially true when you have a team with a solid pitching staff that gets continually kneecapped by crappy defense. Why would you make that team less athletic?

Which individual award or stat race are you most excited to watch over the final month?

Langs: WhetherJ.D. Martinez can win the Triple Crown. He's close, though he could be held off by his own teammate in Mookie Betts or by A's slugger Khris Davis. There have been four instances of a player winning the Triple Crown not just by leading his league in the three categories, but by leading all of baseball. Those are Rogers Hornsby in 1925, Lou Gehrig in 1934, Ted Williams in 1942 and Mickey Mantle in 1956. If Martinez wins it, he likely joins that list.

Schoenfield: The AL MVP race is one of the best in a long time because of the quality of the seasons involved, plus it's a fun debate because of the different types of seasons involved from the top candidates. There is the all-around brilliance of Mookie Betts, Jose Ramirez, Francisco Lindor and Mike Trout; the Triple Crown chase from J.D. Martinez; the defensive brilliance and second-half batting line from Matt Chapman; the clutch hitting of Alex Bregman. Right now, a first-place vote for any of those seven players wouldn't look ridiculous.

Doolittle: The only stat race that grabs me is J.D. Martinez's run at a Triple Crown. I don't care if two of the three categories are outmoded and I certainly wouldn't give him the MVP award for winning it, but there's still something special about the achievement. Beyond that, all of the award races are great this year. None of them are settled, which means every highlight-reel moment the candidates produce from here on out will have outsized repercussions.

How many Triple Crown categories will J.D. Martinez win?

Langs: I'll be an optimist (for once), and say all three.

Schoenfield: I say RBIs, as he ends up second to Mookie in the batting race and one home run behind Khris Davis (in part, because he'll probably sit a few games down the stretch to rest up for the postseason).

Doolittle: One. He won't get Khris Davis in homers, or Betts in average.

What's one under-the-radar thing you'll be following the rest of the season?

Langs: The Indians. Somehow, a team that could realistically win the World Series is managing to fly under the radar. They've faced mediocre to bad competition within their division, but they are a solid team and have been hitting well all year. After a 5.28 bullpen ERA in the first half -- after poor performances and injuries -- they've been much better at the end of games in the second half. And who doesn't want to keep an eye on Jose Ramirez and Francisco Lindor playing every day? Plus, getting the chance to see if Josh Donaldson can make an impact during the postseason.

Doolittle: The Rangers experimented with an "opener" on Monday. The A's did it on Saturday. The Twins have talked about it. I'm wondering if by the end of the season, we'll be at the point where a few teams set their offseason plans around employing this strategy on a semi-regular basis in 2019. I'm not sure what that will look like, but clearly the Rays' scheme has caught the attention of teams around baseball.
Report a correction or typo
Related topics:
sportsespnpostseasonatlanta bravesjd martinezarizona diamondbacksphiladelphia phillieswashington nationalsjose ramirezdivisionboston red soxoakland athleticsmookie bettsmike troutcolorado rockieslos angeles dodgersmilwaukee brewerscleveland indiansmlbstretch runtriple crownmvphouston astroswild cardseattle marinersawardsracesmatt chapman
Copyright © 2022 ESPN Internet Ventures. All rights reserved.
TOP STORIES
Man found shot inside car in southeast Fresno
DA to pursue death penalty against 3 accused in Fresno mass shooting
COVID testing company sued over alleged scheme
Anti-mask parent threatens to bring guns to school: 'Loaded and ready'
Regina King's son, musician Ian Alexander Jr., dead at 26
Truck with 100 monkeys crashes, 1 still on the loose, police say
Booster shots needed against omicron, CDC studies show
Show More
Le Grand woman charged with 3 counts of murder for deaths of children
NCAA criticized for changing policy on transgender athletes
Man shot and killed in central Fresno, police say
4 families displaced after apartment fire in NE Fresno
New details emerge in killing of mother and grandfather in SE Fresno
More TOP STORIES News