DALLAS -- Kawhi Leonard mentioned only one name on the opponent's roster when discussing the LA Clippers' dominant defensive effort in Tuesday's 114-99 win over the Dallas Mavericks.

Granted, Leonard has a well-earned reputation for keeping his word usage to a minimum with the media. But Paul George, his more loquacious Clippers co-star, also only uttered Luka Doncic's name when discussing the Mavericks.

One superstar won't cut it for teams hoping to contend in a Western Conference loaded with dominant duos.

The Mavericks have those kinds of ambitions a couple of years ahead of schedule because Doncic is already so spectacular, performing at an MVP level as a 20-year-old early in his second NBA season. But those ambitions will be pipe dreams unless Kristaps Porzingis, for the present and future, lives up to his potential and maximum-contract paycheck.

It's premature, to be sure, to jump to any grand conclusions about the 7-foot-3 Porzingis at this early point of the season.

It would have been foolish to expect him to immediately return to All-Star form following the 20-month layoff between game action that he had because of the extended rehab process after he tore the ACL in his left knee in what ended up being his final game for the New York Knicks. That's especially true given that Porzingis is making the transition to playing in a new system with new teammates, primarily a ball-dominant star around whom the Mavs' offense will revolve for the foreseeable future.

But Porzingis wants more. He wants opponents to worry about him. He wants to be a name highlighted on the scouting report. He knows that the Mavs need him to consistently command that kind of respect to have a chance to advance past a team featuring Leonard and George or LeBron James and Anthony Davisor James Harden and Russell Westbrook.

As recently as Sunday afternoon, Porzingis looked every bit the part of a co-star. He was an all-around force in the Mavs' road rout of the Houston Rockets, scoring 23 points on 9-of-17 shooting, grabbing 13 rebounds and wreaking havoc defensively.

Porzingis certainly got off to a promising start against the Clippers, swishing a deep 3-pointer on Dallas' first possession. He didn't score again until the final second of the first half, when he drilled a 3 from the half-court logo. It was the only one of his buckets in the game that was assisted by Doncic, who didn't have much fun as the focal point of the Clippers' physical defense, having his run of four straight 30-point, 10-assist performances end with a 22-point, 6-assist, 7-turnover night.

Porzingis hasn't been able to get into a consistent groove as a scorer. He's averaging 18.3 points, shooting 41% from the field and 37% from 3-point range, all numbers down significantly from his abbreviated All-Star campaign with the Knicks. His partnership with Doncic, which looks so good on paper, is still a work in progress, with the chemistry ebbing and flowing in the early going.

"It's very random a lot of times, where my shots come from," Porzingis said. "And I don't wanna [make excuses]. I haven't been shooting the ball that well. I haven't been playing as well as I want to. But it's something that I've got to figure out, do the best that I can, and also us as a group, we've got to figure out how to make sure everybody's comfortable. It's not only myself. It's everybody a little bit."

He's still searching for a comfort zone as Doncic's offensive sidekick, but Porzingis played a massive role in the Mavs' five-game winning streak that was snapped by the Clippers. He has been dominant as a rim protector and is putting up by far the best rebounding numbers (9.2 per game) of his career.

Plus, it isn't as if the Mavs' offense has sputtered often while Porzingis tries to find his rhythm. Due primarily to Doncic's ridiculous production, the Mavs have what would be the most efficient offense in NBA history, scoring 116 points per 100 possessions.

That stat, of course, comes with a couple of qualifiers. It's a small sample, and the 11-6 Mavs had played a soft schedule before the test against the Rockets that they passed with flying colors and the one against the Clippers that they failed.

That's the standard in the wide-open West, where the Clippers, Lakers and Rockets are also faced with the challenge of star duos developing rapport on the fly after forming over the past year.

"They showed the level tonight," Porzingis said of the Clippers, referring to just how difficult it'd be to do serious damage in the West. "They knew we were good. We were coming off a winning streak and went into the game just playing another game, but they went into the game like, 'We want to beat their ass.' They had a little more attitude than we did tonight. That's it. Got punched in the mouth a little bit today. 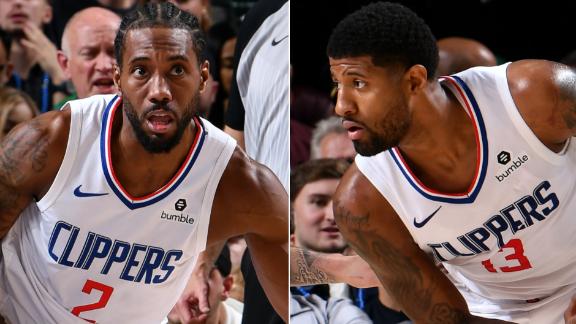 Kawhi, PG lead Clippers past the Mavs
Kawhi Leonard drops 28 points with eight rebounds while Paul George adds 26 points and six steals in the Clippers' win over the Mavericks. 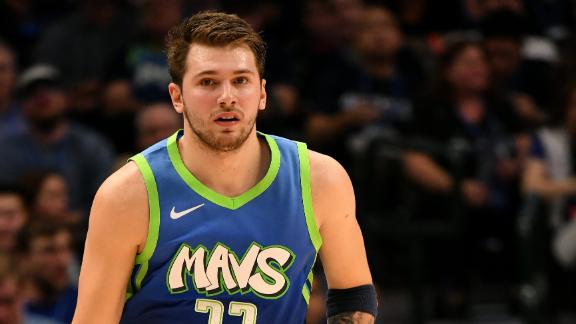