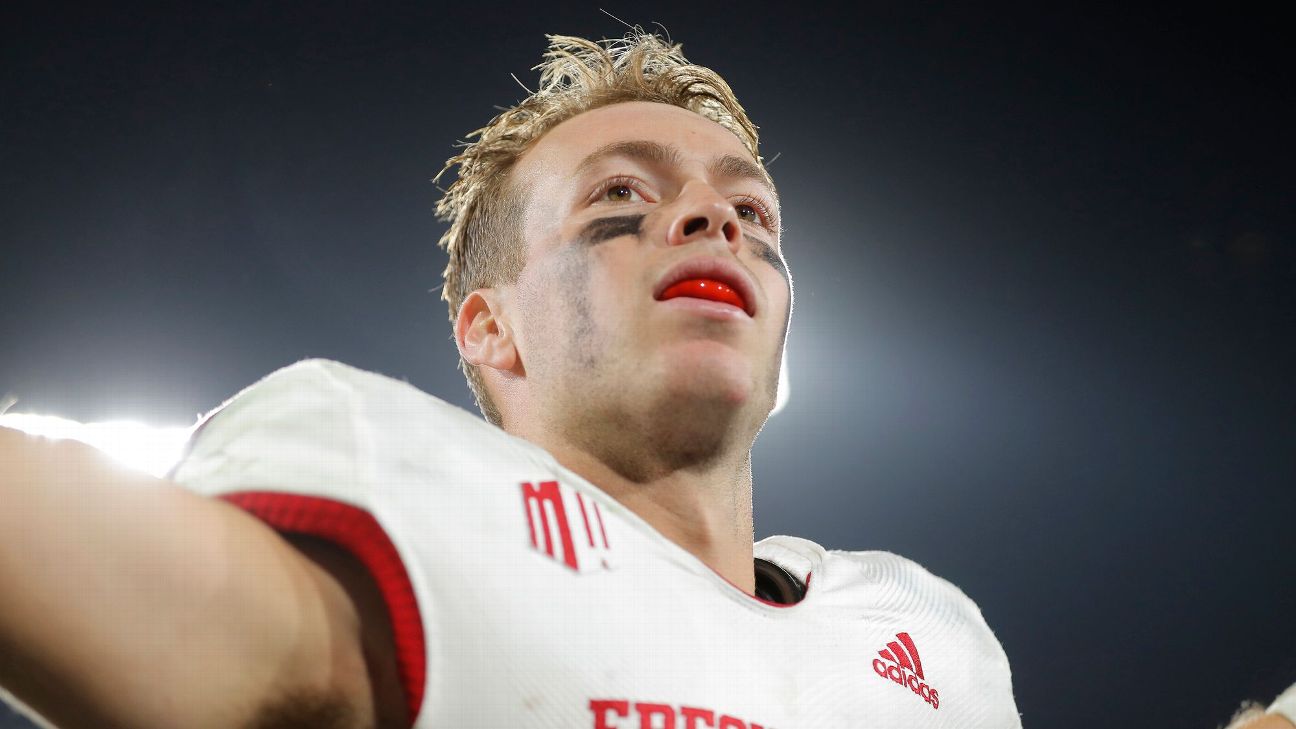 At about 11:09 p.m. PT on Saturday, Fresno State quarterback Jake Haener double pumped, got rid of the ball late and immediately paid for it. He absorbed a UCLA defender on his right side, while another crashed into his unpadded left.

He went down in pain. The incompletion meant it was third-and-goal from the 19-yard line and the Bulldogs trailed by four. So with only three minutes left in the game, his competitive instincts quickly overruled what his body was telling him.


Haener received the next snap from shotgun, took a three-step drop and fired to the front right corner of the end zone. As receiver Erik Brooks hauled in the perfectly placed ball to put Fresno ahead, Haener writhed on the ground in agony. He could barely rotate his hips and as he limped off the field it would have been easy to assume his night was over.

If UCLA didn't march right down the field and retake the lead with 54 seconds left, maybe it would have been. But with the Bulldogs down 37-33, the idea that Haener wouldn't return wasn't worth considering.

"Jake knows he's got to get back up because we need him," Fresno State coach Kalen DeBoer said. "I'm not saying that in a way where you're taking it for granted. I'm saying it in a way where he just wills himself to do that. That's the toughness he has and the competitiveness."

When Fresno took over at its own 25, the pain had not subsided.

"It was just getting a little worse and worse and worse with each throw," Haener said. "I feel like I was throwing all with my arm, because I couldn't rotate because it hurt so bad."

Somehow, it didn't affect his performance. After throwing an incompletion on the first play, Haener took the Bulldogs down the field in one of the most memorable drives in the program's 100-year history. He completed five straight passes, hobbling in between plays, and connected with Jalen Cropper for the winning touchdown with 14 seconds left.

As Haener went to his knees to celebrate the win, his parents watched from a suite at the 40-yard line, soaking it all in. After the game, they met him at the gate near the locker room for what his father called "a moment of pure joy."

"Having a kid since he was 8 years old want to play a game and win a game in the Rose Bowl, it was a kind of storybook thing for it to happen," Ryan Haener said.

After almost taking down current-No. 3 Oregon two weeks earlier, the win established the Bulldogs as possible Mountain West Conference favorites and pushed them into both the AP (No. 22) and Coaches (25) polls. Fresno State (3-1) opens conference play Friday night against UNLV (0-3).

"We want to do something special this year and something that we've never done in the program," Haener said. "We want to go to a New Year's Six bowl and we want to win."

If that happens, it'll have a lot to do with Haener. Building off a promising 2020 season, the former Washington quarterback has established himself as one of the best -- and toughest -- in the country. Through four games, he leads the nation with 1,464 passing yards and has thrown 10 touchdowns to just one interception.

Haener's rise would have been hard to predict just two years ago.

After serving as established starter Jake Browning's backup in 2018, Haener went into training camp with the Huskies needing to beat out Georgia transfer Jacob Eason for the top job, which was easier said than done. A local product and a former five-star recruit, Eason was the fan base's preference.


Haener, by comparison, was a consensus three-star recruit from California who had frequently been told by coaches throughout the recruiting process that at 6-foot-1 he was too short. Still, as camp progressed Haener believed he was outplaying Eason.

On the day when everyone on the team was told what the depth chart would be for the season opener, the coaches informed Haener and Eason they were undecided and needed to evaluate the final scrimmage before choosing a starter.

"They basically said whoever has the better scrimmage tonight is going to be the starter," Haener said.

And Haener felt good about his performance. In the final overtime period, Haener threw a touchdown pass and was mobbed by his teammates in the end zone.

"It's done. I was like there's no way [I didn't win the job]," he said. "And then the next morning they said they were gonna go with him. I was just like, 'OK, it is what it is.' Called my dad. I was heartbroken. It was really hard for me to deal with that especially after I felt like I'd won the job at the end of the day.

"But they went with him and I have no problem with that."

As is almost customary at this point for a quarterback in Haener's situation, he immediately decided to transfer. Prior to Eason winning the job, he was already projected as a possible 2020 NFL draft pick and still had two years of eligibility remaining. If Haener stayed, it was possible he would have to sit for two more years and then go through another quarterback competition before his final year of eligibility.

Haener drew offers from Baylor and Kansas State among others, but Fresno State was the obvious landing spot from the beginning. He had known Bulldogs coach Jeff Tedford since he was around 11 years old, and that familiarity, paired with the outlook for a starting role in 2020, lined up.

"When he called and said he had made the decision to move on, it was pretty much a slam dunk for us," Tedford said. "I evaluated him pretty heavily in high school [as an analyst for Washington]. Not only did I know how good of a player he was, I knew how dedicated he was to play the position."

Years earlier, shortly after his 11-year tenure as the head coach at Cal ended, Tedford went out to a local park with Haener and helped him with some fundamentals, running him through drills. He determined Haener needed to work on his footwork and left him with a challenge: jump rope 500 times without missing.

"I don't know how long it was -- a couple months or whatever. I got a phone call from him and he says, 'I did it, Coach, I did it,'" Tedford said. "That was just kind of an example of how he locked on to things and set goals to do certain things. He was really dedicated to being the best quarterback he could be and as much as anything, that gave me an understanding of his mindset."

Haener spent the 2019 season as Fresno State's scout team quarterback as he sat out the season due to NCAA transfer rules. At the end of the season, Tedford stepped down due to health reasons and he was replaced by Indiana offensive coordinator DeBoer, who spent the 2017-18 seasons in Fresno as Tedford's OC.


DeBoer and Haener connected for the first time a couple of days after DeBoer got the job. It was a whirlwind period for DeBoer as he balanced the initial responsibilities of being a head coach with Indiana's bowl game preparation, but Haener made a positive impression.

"Jake really laid out at that time what his goals were and it was all written out," DeBoer said. "He laid out exactly what the action plans were to reach those goals and it was very descriptive.

"It probably wouldn't have really mattered what was on there -- what mattered was that he took the time to do it and had thought everything through. That's representative of who he is. There's a lot of time and effort, and it's really important to him."

That happened in December 2019. It wouldn't be until late September 2020 when DeBoer finally got to see Haener throw a ball in person.

The coronavirus pandemic wiped out Fresno State's spring practice and the team wasn't cleared to return to campus until just a few weeks before the Mountain West announced it would start its delayed season on Oct. 24. Haener won the job and put up big numbers -- he averaged 336.8 passing yards per game -- but Fresno State played in just six games and struggled to field a full team due to COVID-19.

There was a sense last year that because of the lack of time together -- and the timing with DeBoer's arrival -- the team never got the chance to gel.

"What's really cool is you're seeing all the work that they put in come to a head where the success is a big deal. It's fun to watch."

Seeing the team's success is especially gratifying for Tedford, who after undergoing a few medical procedures since stepping down is feeling good.

Watching the game from home, Tedford was blown away by what he saw from Haener.

"It's one of the top quarterback performances I've seen," Tedford said. "On the road in that stadium against a really good football team. For him to keep responding the way he did, while really showing the grit and toughness of how he performed that way. He was making unbelievable throws. It was awesome." 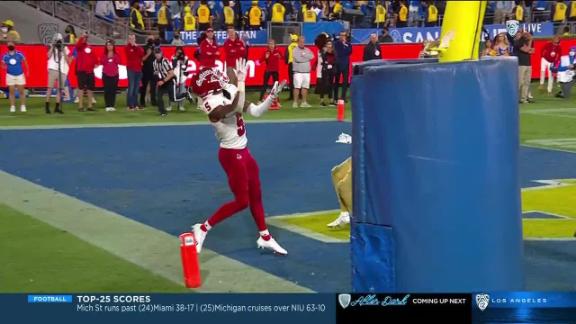 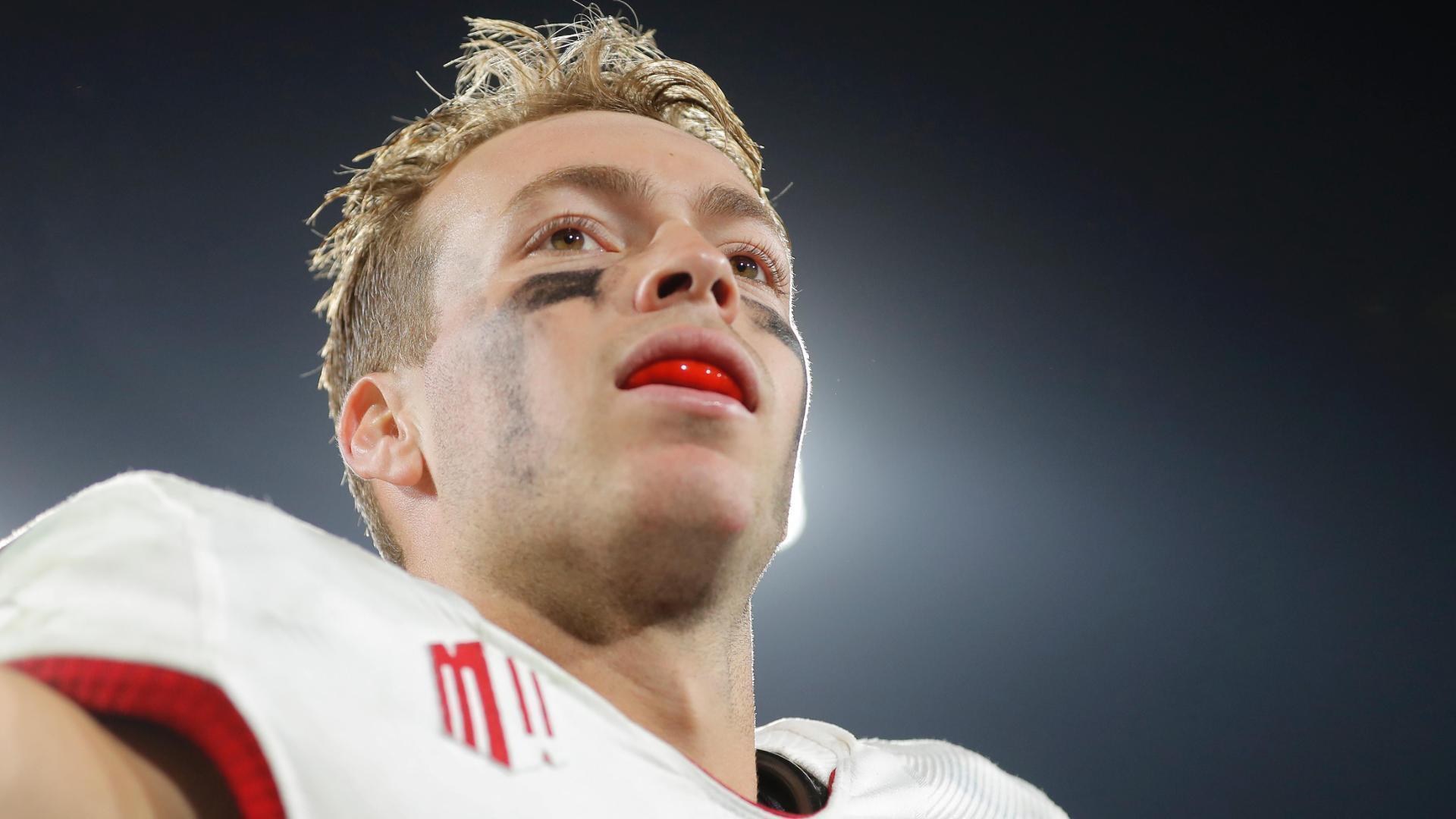