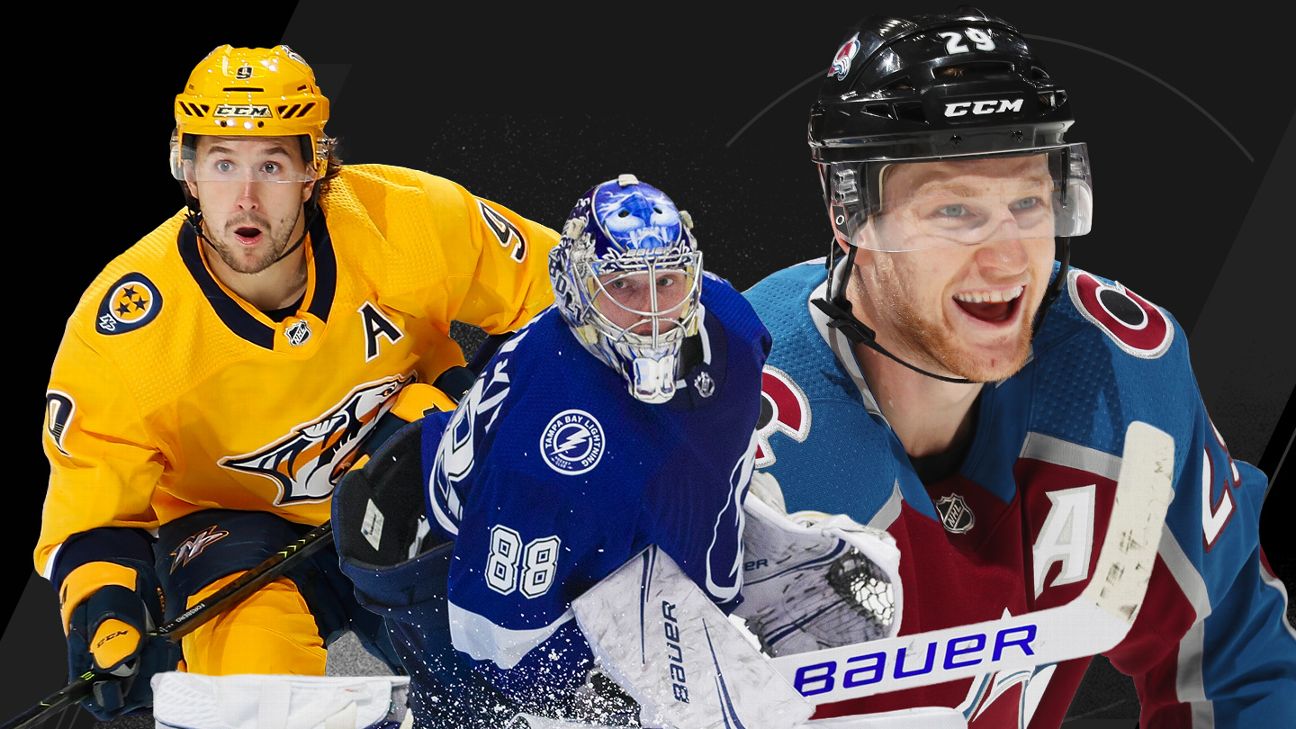 It's about that point in the summer when the NHL goes into hibernation; yes, it's cottage season. With the dust (mostly) settled on the draft and free agency, here's our rundown of where things stand a little more than two months before the 2019-20 season.

How we rank: The ESPN hockey editorial staff submits polls ranking teams 1-31, and those results are tabulated to the list featured here. For this edition, we're projecting how we think the teams will be rated heading into next season, taking into account recent success and other factors, such as the players added via the draft, free agency and trades. The "previous ranking" for each team refers to the club's spot in our way-too-early Power Rankings published right after the Stanley Cup Final.

The Lightning were a regular-season juggernaut who flamed out in the playoffs. They're banking on not letting that mistake happen again, returning with essentially the same roster for 2019-20. But before the season, they need to ink ascending star forward Brayden Point, a restricted free agent, to a new deal.

Do things ever go quiet in the Maple Leafs' world these days? Their offseason so far included a massive trade with the Avs (Nazem Kadri is out, while Alexander Kerfoot and Tyson Barrie are in) plus a defenseman swap with the Senators. But the big summer drama revolves around RFA Mitch Marner. By all accounts, negotiations are tense -- and the sides are quite far apart.

The Preds needed a shake-up after back-to-back years of playoff disappointment. So they took from an area of surplus (the blue line) and added to their biggest area of need (talented forwards outside the top line). The offseason could be summed up as thus: P.K. Subban is out, Matt Duchene is in.

The defending Stanley Cup champs are probably getting a bit disrespected because we all know how hard it is to repeat. With a bunch of RFAs to take care of, St. Louis hasn't made any seismic (or really any) changes to the roster so far this summer. Should be essentially the same cast returning, including coach Craig Berube, who finally shed the interim tag.

After spending the summer of 2018 partying and keeping the band together, the Capitals finally had to say goodbye to five regulars from their Stanley Cup-winning team. The Caps are in maintenance mode, knowing they need to shell out big new contracts for Braden Holtby and Nicklas Backstrom next summer.

San Jose leaned into its bet on Erik Karlsson, inking the defenseman to an expensive, long-term deal. GM Doug Wilson had better be right about him. The collateral damage for the signing wasn't insignificant: Captain Joe Pavelski is gone, getting the term and money he wanted in Dallas.

Everything was status quo for the Flames, a very good regular-season team in 2018-19. Then they made the curious move of swapping James Neal for Milan Lucic, one-for-one. Sure, Neal had a rough go during his first campaign in Calgary (buoyed by a very low shooting percentage), but this trade just felt drastic.

It feels like the Avs can do no wrong these days. Their loaded defensive prospect pool means they could part with Tyson Barrie to land a terrific second-line center in Nazem Kadri. Trade acquisition Andre Burakovsky and free-agent signing Pierre Edouard-Bellemare fortify the bottom nine.

It's been an interesting offseason for the Jets, who are strapped by the cap and have to sign two big RFAs to new deals: Patrik Laine and Kyle Connor. In the process, Winnipeg's blue line got worse, as it parted with defensemen Jacob Trouba via trade and Tyler Myers via free agency.

After a surprise run to the Eastern Conference final, the Canes inked franchise player Sebastian Aho to a new deal -- thanks, Montreal, for setting the terms! -- then doubled down on middle-six depth with Ryan Dzingel and Erik Haula.

It was a sneaky-good offseason for the Stars. Signing Corey Perry (who was bought out by Anaheim) is a low-risk, high-reward move. Adding Joe Pavelski -- who'll potentially skate on the first line alongside Jamie Benn and Tyler Seguin -- could be what transforms this team into a true contender.

Everyone in the NHL is gushing about the Rangers, who entered and exited rebuild mode in record time. Star Artemi Panarin changes the complexion of the franchise (and he's now the highest-paid winger in the league), but Kaapo Kakko and Jacob Trouba will also make huge impacts. New York just needs to clear a little more cap space before October.

Ever since Pittsburgh won back-to-back Cups, it feels like GM Jim Rutherford has been constantly tweaking his roster. The Phil Kessel era (and saga) is over. Alex Galchenyuk, Dominik Kahun and Brandon Tanev (with a questionably long contract term) are the newest depth forwards who get a chance to shine on Sidney Crosby's roster.

This was supposed to be the summer of the offer sheet; thankfully (for fans, at least) Habs GM Marc Bergevin delivered. Not thankfully (for the Canadiens) his bid for Sebastian Aho was easily matched by the Hurricanes. But Bergevin might have been doing the rest of the league a favor, testing the limits of Canes owner (and new league wild card) Tom Dundon.

The Isles took a swing for Artemi Panarin and Sergei Bobrovsky and whiffed on both. Lou Lamoriello's contingency plan: tapping Semyon Varlamov as their new goalie (over Robin Lehner, a 2019 Vezina Trophy finalist) and re-signing captain Anders Lee. In fairness, we were skeptical of Lamirello's offseason moves in 2018 also, and it all turned out OK.

The Yotes almost made the playoffs last season, after a boatload of injuries and a strong late push. They'll look for a better start in 2019-20, and have reinforcements to do so. The big addition is top-line winger Phil Kessel, who gets to reunite with one of his favorite coaches, Rick Tocchet, and should boost the scoring at both even strength and on the power play.

Now that Philly has its goaltending solidified (the Carter Hart era is here, in earnest!), GM Chuck Fletcher is beginning to put his stamp on the roster. The big move was a mega contract for second-line forward Kevin Hayes. Fletcher made adjustments to the defense, too, adding Matt Niskanen and Justin Braun.

The Blackhawks' biggest issues last season involved a leaky defense. Chicago made improvements, adding Calvin de Haan and Olli Maatta (while also parting with a top defensive prospect, Henri Jokiharju). Chicago also made one of the best free-agency signings of the summer: goalie Robin Lehner on a one-year, $5 million deal.

We knew the Blue Jackets would have a rough offseason since Artemi Panarin and Sergei Bobrovsky -- two of the best players in franchise history -- telegraphed their exit months ago. Adding Gustav Nyquist (new top-line winger?) is the consolation, and we'll likely get a healthy look at many of the Blue Jackets' young prospects this season as well.

After winning the draft lottery and selecting top American center Jack Hughes, the Devils accelerated their build. They made a splash acquiring new franchise defenseman P.K. Subban, added veteran leader Wayne Simmonds for a year, and are making their best case to 2018 MVP Taylor Hall to sign long-term. The Trans-Hudson rivalry is back!

With Elias Pettersson changing the complexion of the franchise, the Canucks filled a big area of need (right-side defense) with an expensive contact for Tyler Myers. Vancouver also paid a big price to get J.T. Miller to supplement the top six.

GM Paul Fenton inherited a roster saddled with big, aging contracts. He added one more, inking soon-to-be 32-year-old Mats Zuccarello to a five-year deal. The speedy Norwegian will help right away, but in the long range? That term raises eyebrows.

GM Ken Holland is in charge now, meaning the Oilers' long-term prospects are already looking up. The priority for Edmonton is still drafting and developing players, although the James Neal addition instantly makes the top six better.

The Sabres have a new coach in Ralph Krueger, and they desperately needed more roster depth heading into free agency. They sure got it, adding Marcus Johansson, Jimmy Vesey, Colin Miller and Henri Jokiharju. Adding Mike Bales (formerly of the Canes) as goaltending coach is a sneaky big hire.

The big three era is officially over, with Corey Perry being bought out and Ryan Kesler likely missing the entire 2019-20 season. After a prolonged search, Dallas Eakins was finally tabbed as the new coach. Anaheim will still try to get younger and faster. Perhaps its most interesting offseason addition: Darryl Sutter as a "consultant."

After months of speculation, the Steve Yzerman era has begun in the Red Wings' front office. But he'll need to wait a little longer to truly shape this roster into a contender. The Red Wings are still shedding bad contracts and waiting for their prospect system to develop.

The Kings are stuck in rebuild purgatory. They'd like to get younger and faster -- much like the rival Ducks -- but they're strapped by big contracts still on the books. And thus, it's probably another long season for the Kings.