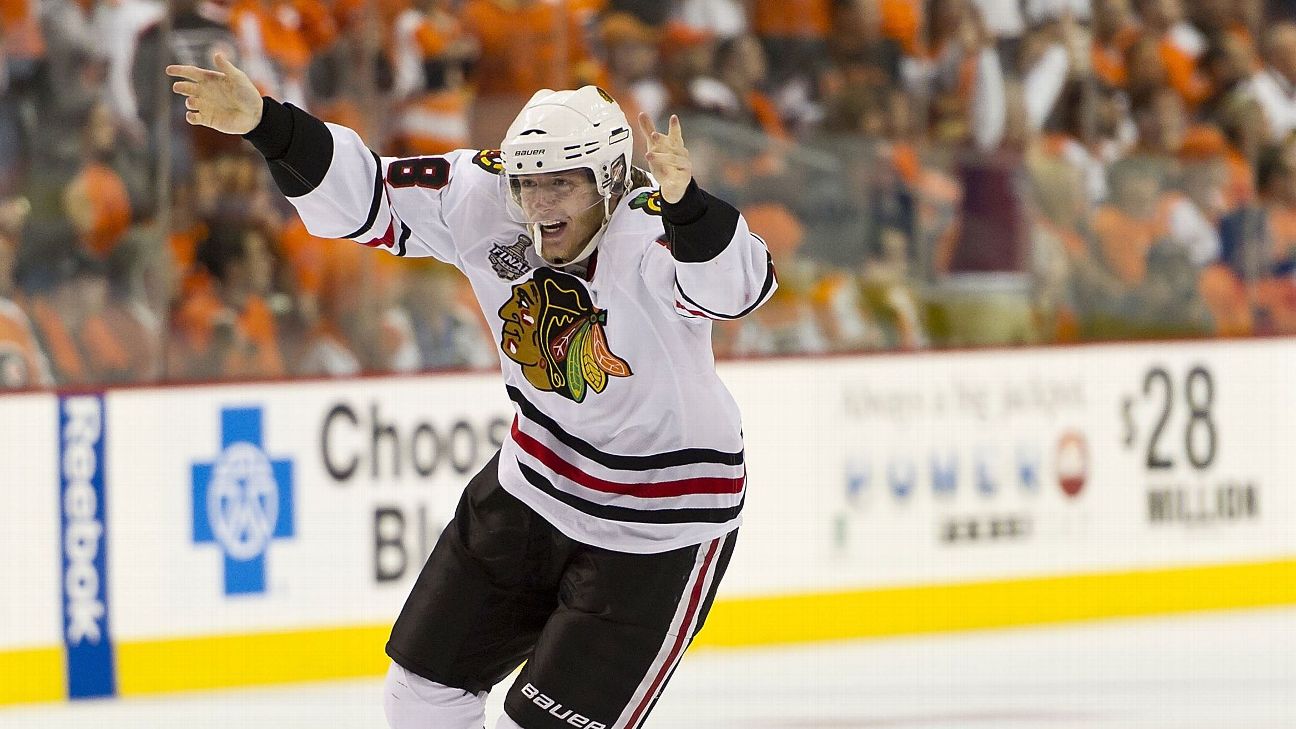 It was 10 years ago today thatPatrick Kanehelped the Chicago Blackhawks win the Stanley Cup with an overtime goal that hardly anyone realized he scored.

He snapped a quick shot at Philadelphia Flyers goaltender Michael Leighton and circled around the net. The first player to raise his hands in victory was Patrick Sharp. Defenseman Nick Boynton joined him for a moment before briefly rejoining the play, as the referee had yet to signal a goal. Kane appeared to be cycling back in the offensive zone before it became apparent that he was sprinting down the ice to hug goalie Antti Niemi in celebration. Kane was nearly at center ice before the Blackhawks bench collectively realized that they were Stanley Cup champions.


"I don't know. It didn't seem like there was much reaction from anyone, so I think that's why I celebrated the way I did," Kane told NHL.com in January. "I went kind of crazy, threw the gloves off, skated down the ice. I don't know. You dream of scoring an overtime goal to win the Stanley Cup as a kid. To be able to do that at 21 years old, in my third season in the league and for a franchise that hadn't won a Cup in 49 years, it was a pretty special moment."

How does the Patrick Kane OT goal stack up against these weird tallies in recent hockey history?

Red Wings goalie Chris Osgood's legacy is built on his postseason prowess, to the point that some believe there's a Hall of Fame case for him. This moment against the Stars in 1998 is not part of that legacy. Jamie Langenbrunner cranked a shot on goal from nearly center ice just 46 seconds into overtime, and the Stars staved off elimination. The series ended in six games, however, on an Osgood shutout.

Osgood wasn't happy with the attention the Langenbrunner goal received as part of a perceived pattern of long-distance goals the 25-year-old was surrendering. "Two long goals,. Who cares?" Osgood said. "I bounced back. I couldn't wait to play tonight. I get sick of talking to you guys."

BU defenseman Colby Cohen could tell that there was a goal in him during the Frozen Four, having hit a few crossbars that weekend in Washington, D.C. In overtime of the championship game against Miami, he let it rip from the left point, despite having Kevin Roeder of the RedHawks sliding down to block it. The puck deflected off the senior defenseman and over the shoulder of RedHawks goalie Cody Reichard at 11:47 of overtime to win the national championship for BU. Perhaps it was meant to be, after the Terriers scored two goals in the final 59.5 seconds of the third period to force overtime.

"What do you do?" Miami coach Enrico Blasi said after the game. "Kevin makes a great play, sacrifices his body. It goes over Cody's head and into the net. That's what happens in overtime, you know?"

It was a simple play, one executed by defensive partners Dan Boyle and Douglas Murray with regularity to break up a forecheck. Murray got to the puck ahead of Colorado's Ryan O'Reillyand passed the puck back to Boyle, who sent it around the end boards. But Boyle's backhand attempt ended up behind goalie Evgeni Nabokov to give the Avalanche an overtime win in a game that saw them outshot 50-16 in regulation. Whether or not O'Reilly got a piece of it, he was credited with the goal.


Boyle got some redemption, however. He scored the opening goal of Game 4 to lead the Sharks to three straight wins and a series victory in six games.

This Sergei Fedorov game winner was notable for being the first Stanley Cup playoff overtime goal awarded via video review, which was introduced in the NHL in the 1991-92 season. Fedorov flipped a shot over North Stars goalie Jon Casey's right shoulder and into the top of the net. But it entered and exited so quickly that many players -- including Fedorov -- were uncertain that it had gone in. Series supervisor Wally Harris called for a review at the next stoppage, and it turned out that Fedorov had won the game.

"Because it was an overtime goal, we didn't say anything right away," Harris said.

By nature, every overtime game-winning goal is unexpected. Kane's goal remains eerie because of those few moments when there seems to be a celebration without any indication from the referees that there should be one. As coach Joel Quenneville told the Blackhawks' website: "When [Kane] went by and he was jumping up and down, and I'm sitting there waiting, I'm waiting. I was just making sure that, 'Hey, I want to see some verification from the official to make sure this is over with.' And it took forever. But they came in with the video, and it was clear it went into the net."

The inaugural National Women's Hockey League season ended with the Pride winning the Isobel Cup with two straight victories over the Beauts. Their Game 1 win came in one of the most unlikely scenarios in a championship overtime. The on-ice officials ruled that a Buffalo defender had covered the puck with her glove inside the crease and signaled that the Pride would be given a penalty shot in overtime. Hilary Knight, the U.S. national team star who was in the conversation for best player in the world at that point, took the shot and beat Brianna McLaughlin for the first championship in league history.

"I really didn't get an explanation other than, I guess, there's a different set of rules for two different teams, so I'm sure they'll lose some sleep tonight after looking at it," St. Louis captain Alex Pietrangelo said after watching his Blues teammates smash their sticks on the ice in anger after the goal.

The NHL responded to that postseason controversy (and others) with a dramatic expansion of video review for 2019-20. The coach's challenge now includes "Missed Game Stoppage Event in the Offensive Zone Leading to a Goal," a.k.a. any play that results in a goal when the defending team claims that play should have been stopped. For example, when there's a hand pass that all four officials miss in overtime.

No list of playoff overtime weirdness is complete without Brett Hull's "skate in the crease" heartbreaker against the Sabres in triple overtime. Please recall that Hull scored the game winner after a moment when the puck was outside the crease but his skate was inside of it. The NHL declared that type of goal illegal ... until it wasn't, as the league sent a memo to teams during the season clarifying the rule. Hence, Hull had possession, took a shot that was saved by Dominik Hasek, retained possession and scored on the rebound.

Many of the Sabres did not get the memo, as they locked themselves in the dressing room after the game for 20 minutes, until they were given clarification from the NHL on whether the goal counted. Dixon Ward of the Sabres said it best: "It would be unfair to Dallas for this to turn into a controversial goal. It would be unfair to Brett Hull. It's a stupid rule anyway. It's the NHL's fault for having a stupid rule, so they can deal with it."

The NHL dumped its "skate in the crease" relay rule that summer.

This is the goal that put "stanchion" into every Vancouver fan's vocabulary. Defenseman Alexander Edler kept the puck in at the right point and fired it off the glass. Everyone on the ice was waiting for the disc to circle around the end boards ... but the puck deflected off the stanchion on the glass and back to the middle of the ice. That's where Kevin Bieksa alertly smacked a one-timer past Antti Niemi,who was still looking for the puck near the end boards when Bieksa released the shot,to send Vancouver to the Stanley Cup Final.

"Probably the ugliest goal of my career but the biggest," Bieksa said. "It was just a knuckleball that I barely got enough wood on it to get it on net. It was a hard puck to shoot. Just put it on net was my first thought, but when it went in, I just yelled out, 'Let's go to the Cup, baby.'"

It was the infamous "Fog Game" in Buffalo. It was more than 70 degrees outside at game time, with high humidity. The Aud, built in 1940, had no air conditioning, and temperatures at ice level were measured around 90 degrees. Hence, a thick fog rose from the surface during the game, causing five stoppages in play in the first three periods and seven more in overtime.

At 18:29 of the extra session, Rene Robert's shot beat Bernie Parent for a foggy game winner. As Robert told the Buffalo News,"People say it was one of the greatest goals ever, but that was probably one of the luckiest goals ever, too. You could try that a thousand times over, and it wouldn't go in. I didn't have a lot of room. All I tried to do was hit the net, and it happened to go in. We even shot from the far blue line because the fog was so thick. Anything you kept low and put on net, you had a chance. That's what I tried to do. I kept it low, and I was rewarded."