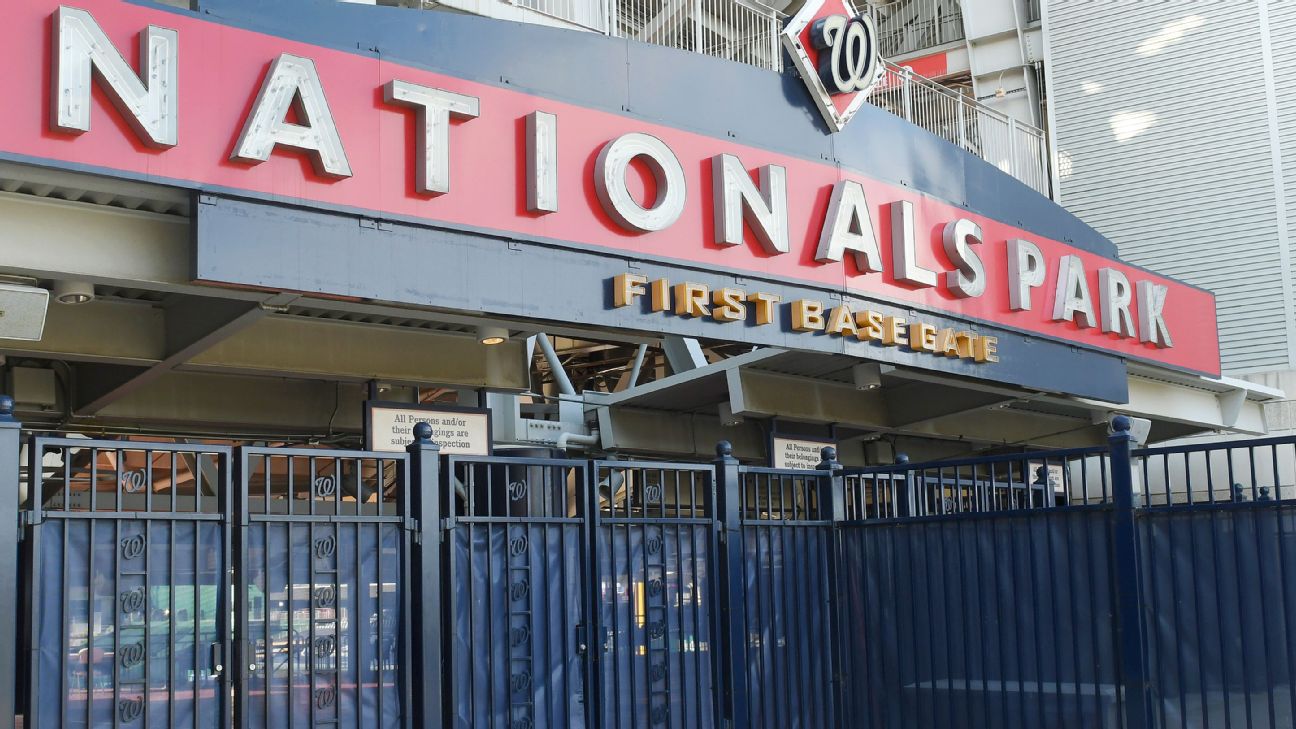 The action followedthree MLB games being postponed on Wednesday as players across the sports landscape reacted to the weekend shooting by police of Jacob Blake, a Black man, in Wisconsin.


Eight other Major League Baseball games, all part of doubleheaders, went on as scheduled Thursday.

Throughout the day, the Red Sox strongly considered not playing to protest social injustice, sources told ESPN's Jeff Passan, and were in communication with the Blue Jays as both teams offered each other support.

"The continued police brutality and social inequity demand immediate attention and focus from all of us -- not only Black Americans and Canadians," the Red Sox and Blue Jays said in a joint statement. "We fully respect the decision of our players to bring further awareness to the systemic racism that contributes to police violence against Black, Indigenous and people of color in our communities. We look forward to getting back on the field, and using our strongest platform, our game, to amplify our message demanding meaningful change."

Red Sox manager Ron Roenicke called it "a really important time in our country," adding that while baseball is important, "we know the issues in life are more important."

"If you're a kid and you turn on the TV and you don't see we're playing, and you ask your parents, 'Why aren't the Red Sox playing?' I hope the parents have a serious discussion with their kid because we need to discuss things more, we need to listen more, and that's the only way we're going to change," Roenicke said.

The Twins and Tigers will make up Thursday's game as part of a doubleheader on Friday, the teams announced.

"The recent shooting of Jacob Blake, a mere three months after the killing of George Floyd, shows again that real change is necessary and far overdue in our country, and it is our responsibility to continue playing a role in efforts to affect meaningful reform," the Twins said in a statement.

Blake was shot seven times by police Sunday as he attempted to enter the driver's side door of his vehicle with three of his children inside. Video of the shooting was distributed on social media, sparking more protests and causing more athletes to speak out or take action.

The Athletics released a tweet from the players, in which they said they were not playing "to help raise awareness for these social issues, not just tonight, but for our collective future."

The Rangers also tweeted about the postponement, saying they respected the decision of the Athletics players.

The Phillies issued a statement saying the decision to call off Thursday's game was one made collectively with the Nationals.


"We support their decision to use their platform to call attention to the racial and social injustice that continues to exist in our country," the statement by the Phillies said. "We will continue to stand behind our players and those on the front lines working to generate accountability and real change in our society."

"When I have to go home at night and think about my grandkids and how they're going to grow up ... it hurts," he said. "It hurts a lot. We go through this day in and day out. I hear from the players, how they struggle, knowing we're trying to do our best to go out there and play this game, but there are things going on in this world that they can't put aside. It's time to speak up. I think that's the message we're trying to send. We have to speak up."

Phillies first baseman Rhys Hoskins acknowledged that some members of the team were "on the fence about whether they felt comfortable playing, given the climate in this country right now." He said the decision was made easier after the team held a meeting to discuss the issue.

"The listening part is key," he said. "Whatever decision was made, we wanted to make sure we were doing it together. We listened to guys speak. We listened to guys get emotional, and I think that's something that stuck with all of us, and it was in the best interest to not play tonight and go about our business tomorrow."

The Mets and Marlins jointly walked off the field before their game was postponed. Both teams initially lined up along the Citi Field baselines, while Mets starters took their positions in the field. With Friday being Jackie Robinson Day across baseball, the two teams stood for a 42-second moment of silence, in honor of Robinson, then left the field.

The Orioles said in a statement that the decision to call off Thursday's game against the Rays was made after "continued reflection and further dialogue" and that the players "join athletes around the country in expressing solidarity with victims of social injustice and systemic racism."

Baltimore manager Brandon Hyde said it was apparent during a team meeting a lot of his players were "hurting" and that he was supportive of the decision to not play.

"It's my job to support our players to the utmost, to communicate with our players as well as I possibly can, and I feel that we've done that," he said. "I'm really proud of our players."

In contrast to other teams' joint statements supporting decisions to postpone games, the Diamondbacks released a statement later Thursday saying their players were prepared to play before the Rockies made the decision to call the game off. The D-backs said the players planned to "voice their support of social justice and equality" by wearing black jerseys and donating their game checks to social justice organizations.

"We are confident that the execution of our plan would have represented our support of complete and total equity, while providing impact and driving awareness of this ongoing organizational priority," the Diamondbacks said in their statement.


The eight MLB games were played on a day when the NBA, WNBA and NHL all postponed play. That drew a sharp rebuke from St. Louis Cardinals pitcher Jack Flaherty, whose team lost both games of Thursday's doubleheader with the Pittsburgh Pirates.

Flaherty tweeted, "WE ARE THE ONLY SPORT PLAYING TODAY LET THAT SINK IN," before later deleting the tweet. In a video call later with reporters, he said he discussed a unified protest across baseball with players Thursday, but nothing materialized in part because of pushback from some players who didn't want to sit out.

"It's tough because yesterday would have been the day for leaguewide action, and it wasn't able to happen leaguewide yesterday,'' Flaherty said, adding that he hoped it would happen Thursday. "It sucks because you look for it to be a unified thing."

Games called off Wednesday were matchups between the Cincinnati Reds and Milwaukee Brewers, theSeattle Mariners and San Diego Padres, and the Los Angeles Dodgers and San Francisco Giants.

Roberts said the Dodgers stayed together in deciding how to proceed after Wednesday's postponement.

"Regardless of the doubleheader, he wasn't going to play, felt that he wanted to continue to stand firm on his position, which I absolutely respect and support,'' Roberts said of Betts. "But in talking to him this morning ... talking to The Players Alliance and Black players around the league, they just came to the consensus that they could use their platform more by playing today, playing both games.

"And also the fact that there's a lot of white teammates that stood beside them in not playing, acknowledging that and to continue to stay unified and play and to stay in lockstep with their teammates was very important."

ESPN's Jesse Rogers and Pedro Gomez and the Associated Press contributed to this report. 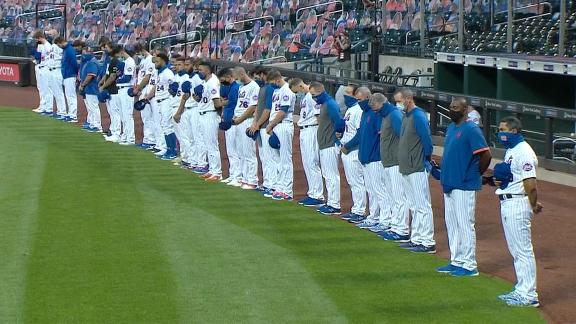 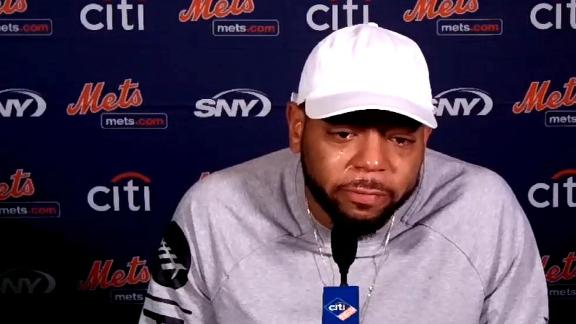