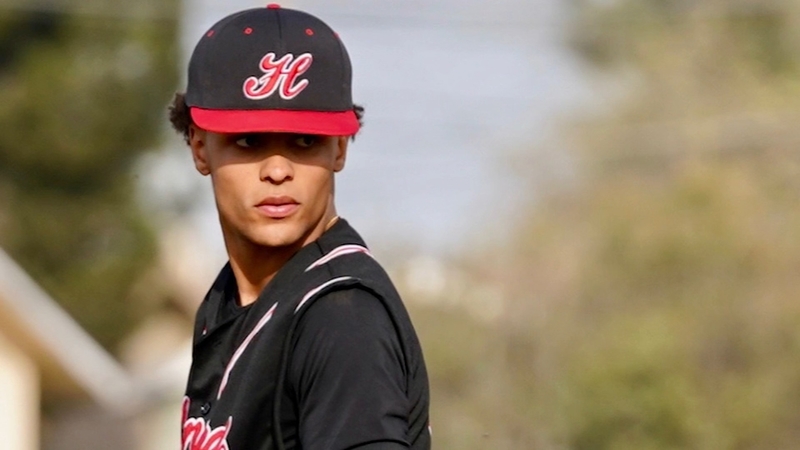 Hanford's Juaron Watts-Brown is coming off his most successful season on the grid-iron. The senior quarterback led the Bullpups to its first 10-0 start since 1974.

He was also an ace on the mound with a lot riding on his senior year. Major league scouts had been visiting and calling following an injury to his throwing arm he suffered during football.

"They were going to see how I came out of the gates, off my injury and prove to them that I'm hopefully draft-eligible ready to play," Juaron said. "If I did come out the gates mid to low 90s just shutting teams down, it would've given me a good chance to get drafted this year."

Despite the shortened draft, Juaron is hopeful he will get drafted his junior year of college.

Next year the Bullpup will pitch for Texas Tech, a program that has advanced to the College World Series four of the last six seasons.

"College is literally what everyone looks at in that town. Everyone has like a Texas Tech sticker just the atmosphere and the fact that I'll get taken care of over there," he said.

This year, Juaron was only able to pitch one game and says it's heartbreaking not getting one last chance at chasing a Valley ring.

"Especially with the team we had too, our team was bonded from the sophomores to the seniors, so it was sad that we weren't able to show the valley how good we were going to be," he said.

Juaron is a multi-sport athlete going back-to-back seasons in football, basketball, and baseball. He is looking forward to seeing how he will improve on the mound in college.

"In each season, I'm focused on that one sport. I don't get to focus on baseball year-round like some of these others guys do, so I'm excited to see what I can do when I really focus on it."
Report a correction or typo
Related topics:
sportshanfordhanfordbaseballsports
Copyright © 2021 KFSN-TV. All Rights Reserved.
SPORTS
Simone Biles and 'the twisties': How fear affects safety in gymnasts
Pink offers to pay Norwegian beach handball team's uniform fine
Bulldog Breakdown: What coaches, players think about Fresno State
Bulldog Breakdown: What coaches, players think of Jimmy Kimmel LA Bowl
TOP STORIES
Pedestrian hit and killed on Hwy 99 in Fresno for second day in a row
Woman killed in Tulare Co., 'armed and dangerous' suspect on run
Fresno State football tickets are now on sale
UPDATE: Fresno mom shot in front of 6-yr-old daughter dies in hospital
Man shot to death in southwest Fresno
Bee swarm attack kills man, injures 5 in Arizona
COVID surge for unvaccinated people is only beginning, experts warn
Show More
3 killed in multi-vehicle crash in Tulare County
Police investigating deadly shooting in southeast Fresno
Fresno's Tower District gets biggest makeover in 60 years
Man killed, 16-year-old boy injured in Fresno County homicide
Bacon may disappear in California as pig rules take effect
More TOP STORIES News