Who is 'Steve from Virginia,' the Trump Tower climber? 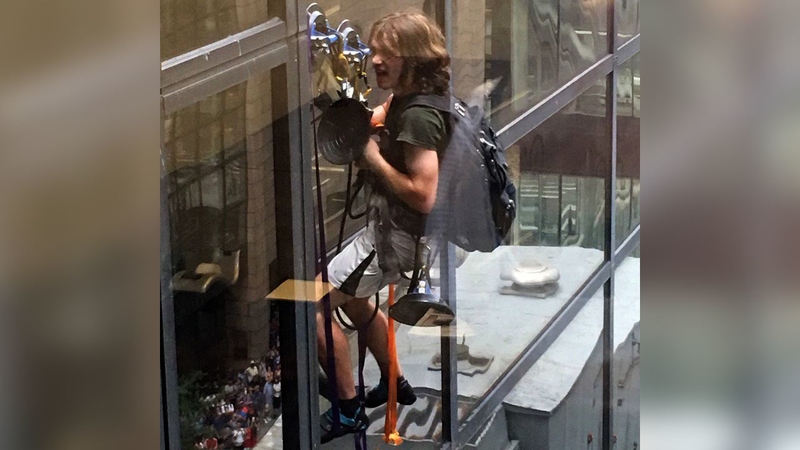 MIDTOWN, Manhattan -- The man who led police on a cat-and-mouse chase up the side of Trump Tower in Midtown Wednesday afternoon and into the evening has been identified as 19-year-old Stephen Rogata, of Great Falls, Virginia.

Rogata claimed to be a researcher seeking "a private audience" with GOP presidential candidate Donald Trump spent three hours scaling the glass facade of the building using large suction cups before officers hauled him to safety through an open window.

Here are photos showing the climber:

Officials said he took his father's car and drove to New York Tuesday night, checking into the Bowery Grand Hotel at 10 a.m. Wednesday.

Rogata wore a backpack and used a harness and rope stirrups to fasten himself to the side of the 68-story Manhattan skyscraper. Starting at 3 p.m., he climbed as high as the 21st floor before officers grabbed him. He is undergoing a psychological evaluation at Bellevue Hospital and has been charged with reckless endangerment and criminal trespass.

Rogata was known as Michael Joseph Ryan, but recently changed his name and had new identification with him. It is unclear if Rogata is his legal name.

It appears that he posted a video online Tuesday outlining his plan and intentions.

The video, posted to YouTube, shows a man who looks like the climber talking about why he planned to climb Trump Tower. While ABC News has not confirmed that the man in the video is the climber, a high ranking police source tells us there is "no reason to believe it's not him."

Detectives determined quickly that Rogata posed a threat only to himself and responding officers, who had to rescue him off the building.

"At no time did he express that he wanted to hurt anybody," NYPD Assistant Chief William Aubry said. "His sole intention was to meet with Mr. Trump."

It is unclear exactly what he wished to discuss with the presidential nominee, though he purported to be a fan in his video and encouraged people to "get out and vote for Mr. Trump in the 2016 election."

Great job today by the NYPD in protecting the people and saving the the climber.