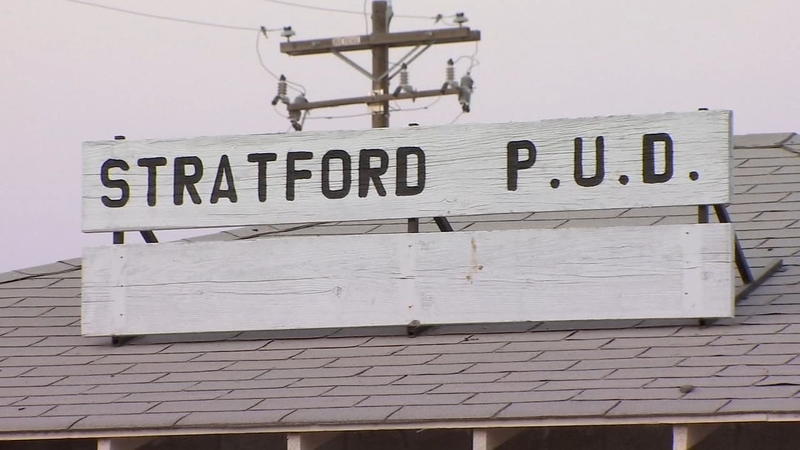 Stratford residents without drinking water after both wells stop working

STRATFORD, Calif. (KFSN) -- It will take at least a full day's work, just to get the pump up from the main broken well in Stratford. Sand got into it last week, causing major problems.

"The well began producing sand and caused the mechanical seal to fail. We also noticed some vibration on the well and the motor was pulling high amperage," said Stratford PUD General Manager Jon Demsky.

NOW:Officials believe it will take an entire day to get the pump out of the main well in Stratford. The camera will likely be placed into the well tomorrow to diagnose the problem. pic.twitter.com/TKSAz5bML6

That prompted water officials to turn it off and go to a secondary well. Until that failed on Sunday morning. Workers say both wells are not dry. They have mechanical problems. But just figuring out what is wrong has been tedious.

"They are trying to figure out which one is going to be the fastest to fix. We had this well we thought was going to be fine to fix right now this week, and then now they're having issues getting the pump out of the ground, it's wedged underground, that's why they moved over to the other well," said Stratford PUD Patty Silva.

For now, water is being trucked in with the help of water trucks from a dairy and one fire truck. Workers are trying to supply enough water to the system for residents to be able to have a quick shower and flush their toilets.

NOW: Stratford residents are being shuttled in water from a local dairy for non sanitary purposes. The water can be used for showers, toilets, etc- just not drinking. pic.twitter.com/JJmSwViVno

On Monday a representative from the state water board showed up to help find a solution to get clean drinking water restored to residents as soon as possible. There does not seem to be an easy fix.

"It's pretty complex right now. They lost two wells within three days. So kinda the backup plan and the backup plan both did not work this time so it's trying to assess what happened to the wells and how to fix them and get the repairs done as soon as possible," said State Water Resources Board Tricia Wathen.

According to the public utility district, it was Friday night when Stratford's main well failed.

Customers who get water from the Public Utilities District are stopping by the office to get updates and some water to get them through at least one day. In small towns- big hearts abound. Many farmers are stepping in to help- including the Barlow family. They got a call from their friend senator Andy Vidak- and jumped in their trucks to help.

"Being from the valley just wanted to help our local friends and family- just wanted to donate some water and make sure everyone is hydrated because it's so hot outside," said Farmer Stephen Barlow.

So many are pitching in- to help alleviate the major inconvenience.

In preparation for the start of school Wednesday- porta potties were in place. Water deliveries were also made.

For Tuesday, water officials are hoping to put a camera down the main well to determine the exact cause of the problem.

Officials will then decide which well should be fixed first.

Stratford schools start Wednesday. So for now, porta potties are being brought in for students and bottled water deliveries have been made. pic.twitter.com/fBftRDnl9f