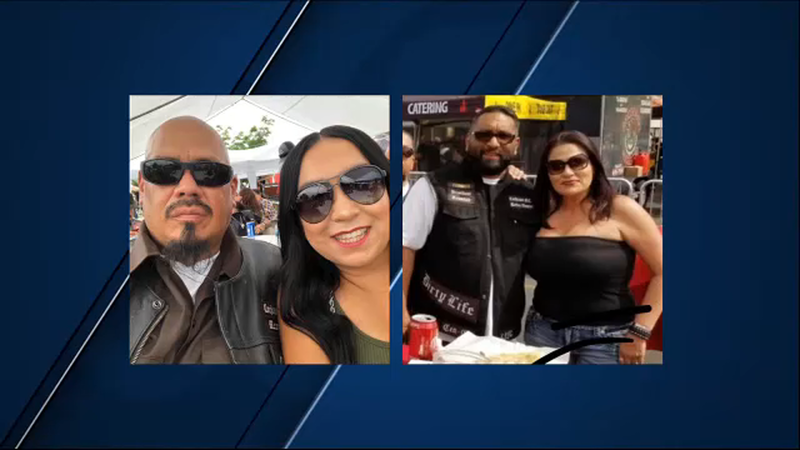 TULARE COUNTY, Calif. (KFSN) -- "It's hard to believe that that's the last ride we are going to take together," said David Cox.

Cox was on the last ride two South Valley couples took Saturday night. They went to a charity event in Fresno, then Gilbert Vargas and his longtime girlfriend Mitzi Rodriguez, along with Jose and Rita Vargas, stopped at In and Out burger in Visalia before heading home. But David said he left early because he had to work Sunday.

"Nobody was drinking in our club, we were all sober so the fact that we were doing everything right and it didn't matter so she was the one who did something wrong and now we have to live with four people gone," he said.

A cross, a brown bandana and a single rose to mark the spot on Highway 65 near Avenue 196 where their lives were abruptly cut short. California Highway Patrol officers say 24-year-old Jazmin Paramo was going the wrong way. For how long, investigators are working to figure that out.

"They might have more of an idea once they dive into the investigation and vehicle components and stuff. But being at 2:04 in the morning, we do not have really any witnesses to it," said CHP officer Mark McWilliams.

Gilbert Vargas was one of the founders of the Cochinos Motorcycle Club and Jose Vargas, was the treasurer. They are not related but were great friends.

Monday at O'Reilly Auto Parts on Henderson Avenue in Porterville, where Jose worked, coworkers and customers reminisced in disbelief.

"There's an emptiness when you walk in there. He's not there," said Robert Martinez.

"He's usually here. A smiling face and he's not there. It's unfortunate, the accident you know. It should bring awareness to DUI you know. People need to be careful out there," said Ramiro Ruiz.

Officers are looking into several factors, including what speed the suspect was going. She has two other prior traffic violations within the past few years -- for running a stop sign and not having insurance at a crash scene.