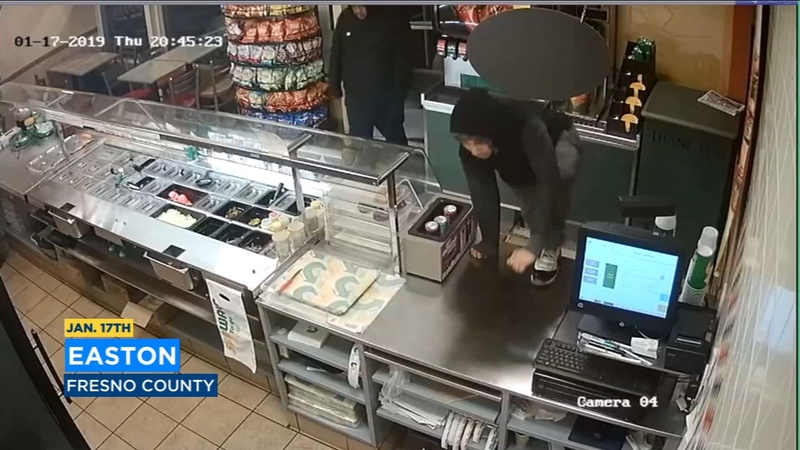 The Fresno County Sheriff's Office needs your help tracking down two thieves who robbed a Subway restaurant in Easton.

The robbery took place as a store employee prepared to close for the day.

That Subway manager says he has been open since 2007 and has been robbed at least three times.

Now he is hoping these suspects - authorities say are responsible for his fourth robbery - will be arrested and taken off the streets.

It was January 17 at 10 p.m. when these two young hooded robbers ran into this Subway in Easton during closing time and jumped over the counter.

The only employee working was in the back grabbing something.

Surveillance shows him going to the ground after running into one of the thieves, who directed him to the front to meet the other robber after patting him down to see if he had a weapon.

He opens it up. His buddy standing at the register takes all the cash, they go back to the back.

That is where the smaller suspect can be seen rummaging through a desk and taking a stack of mail.

Seconds later, both young thieves make their way out the back room and out the front door with an undisclosed amount of cash.

The Fresno County Sheriff's Office wants you to take a good look at the two suspects so that they can take them into custody and hopefully prevent both from striking again.

The manager also says the suspects took off with his employee's phone but that was later recovered without the SIM card.

The employee was not injured.