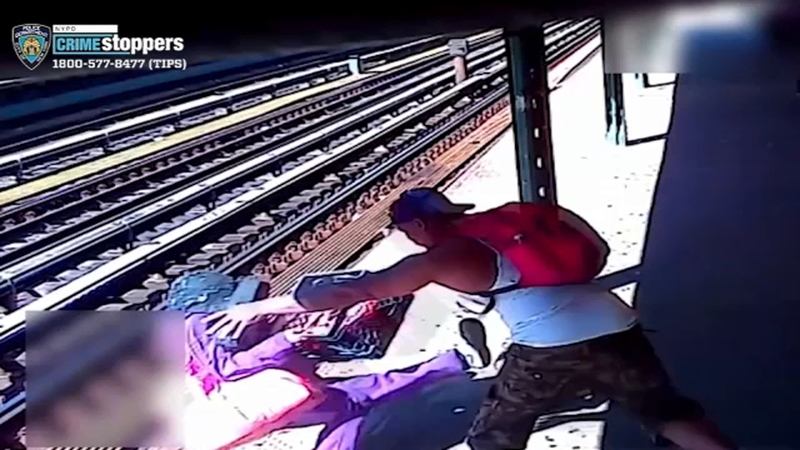 NEW YORK -- Police have arrested a man in connection with the Bronx subway shoving that left a 52-year-old woman with a broken collarbone.

Theodore Ellis, 31, is in custody for allegedly throwing the woman onto the subway tracks at the Westchester Avenue/Jackson Avenue subway station in the Longwood section of the Bronx.

Ellis reportedly told police he was drunk at the time of the incident and "didn't realize his strength" when he tossed the woman off the platform.

The horrifying incident happened around 4:40 p.m. Sunday and was all was caught on camera, and police said Ellis doesn't remember what the woman said to him prior to the alleged crime.

There was no train coming, and others at the station helped her get back onto the platform.

In addition to a broken collarbone, the woman suffered cuts all over her body, but she is expected to be OK.

She was taken to Lincoln Hospital and treated for her injuries.

The incident is the latest in high-profile crimes in the city's transit system, where a bus driver was stabbed and slashed by a passenger early Tuesday.

"We are looking at all ways we can to make people feel -- and actually be -- safer than they are right now, than they feel right now," Governor Kathy Hochul said. "We are looking at all options. I have these conversations with the leadership of the MTA to talk about, are we doing everything we humanly can in a smart way, in a way that will actually work, to protect New Yorkers on the subways? These are part of our ongoing conversations."

The MTA has talked about testing barriers to prevent subway shoves, but that's next to impossible at elevated platforms like the one where this incident took place.

"It don't feel safe at all here," straphanger Wali Deshawn said. "Because people getting hurt, injured, doing stuff like this. It's just crazy. "

The governor asked about metal detectors on the subway, but in this case, the suspect wasn't armed.

Both NYPD and MTA officials say the victim in the attack has been uncooperative, both with police and hospital staff, refusing to tell them what happened or if she knows the suspect.

Police say she has more than 30 prior arrests, many of them drug related.

Anyone with additional information in regard to the identity of these individuals is asked to call the NYPD's Crime Stoppers Hotline at 1-800-577-TIPS (8477) or for Spanish, 1-888-57-PISTA (74782). The public can also submit their tips by logging onto the CrimeStoppers website at https://crimestoppers.nypdonline.org/ or on Twitter @NYPDTips.

104-year-old Bertha Komor from Connecticut, checked off a wish on her bucket list when she got the chance to pet a penguin.