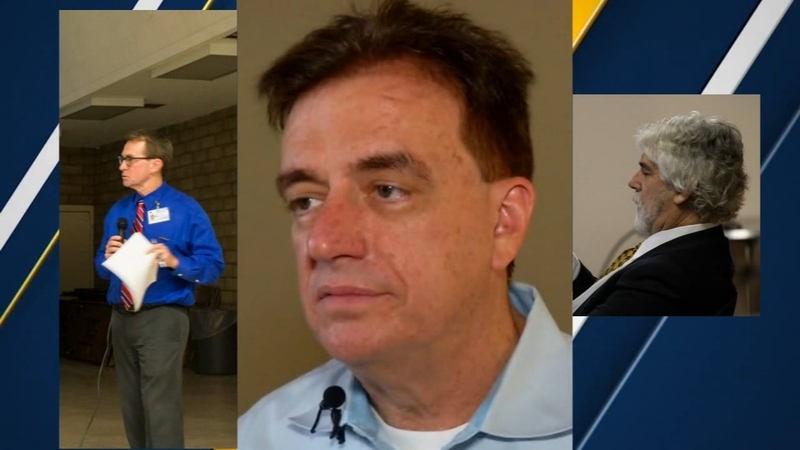 FRESNO, Calif. (KFSN) -- Action News cameras were rolling as Tulare County District Attorney investigators served a search warrant at Tulare's public hospital in the fall of 2017, as part of an investigation into the company that previously managed the hospital-Healthcare Conglomerate Associates, or HCCA.

HCCA no longer manages the hospital, which reopened under new leadership in 2018 after a months-long closure.

"I think it's pretty clear it was the longest, most expensive investigation in Tulare County District Attorney history," says Drew Phelps with the Citizens for Hospital Accountability. "This is a huge white-collar crime case."

Drew Phelps is a member of Citizens for Hospital Accountability, the group of community members who raised concerns of possbile financial mismanagement and conflicts of interest by HCCA and the hospital's previous board of directors.

No former board members are charged with crimes, but Phelps says Benzeevi, Germany, and Greene were the worst actors.

The Tulare County District Attorney's Office filed numerous felony counts against all three on Tuesday, including embezzlement, money laundering, and grand theft, accusing the three of using, "control of public hospital entities to enrich themselves through the improper use of taxpayer and private loans, and other public integrity crimes."

"It's very validating for the work that we've already been able to do, the really fantastic community work," Phelps said. "Of course, very thankful to Tim Ward, the Tulare County District Attorney, and his investigators did a fantastic job over the course of about three years or so."

The complaint reveals that Benzeevi left the country in March of 2019 and hasn't returned since, while Germany is a resident of Arizona.

The district attorney's office says they are in the process of contacting the attorneys of all defendants to speed up the process of placing them in custody.

"Since 2017, Criminal Investigators have traveled over 70,000 miles to 8 California counties and 6 U.S. states including Arizona, Idaho, Maine, Georgia, Colorado, Michigan, and Washington D.C. Fifty-eight total search warrants were served. Investigators, support staff, and prosecutors dedicated over 13,500 hours to the investigation. The TCDA Digital Forensics Unit collected approximately 30 terabytes of digital evidence. To put that in context, it would take nearly 45,000 standard CD-ROM discs to hold the information.

We are grateful for the support and patience of the community, as well as the Tulare County Board of Supervisors during this unprecedented investigation. The Board's commitment ensured that we were able to utilize our resources fully. We estimate the entirety of the investigation amounts to slightly over $1.5 million in staff hours and overtime, travel, and associated costs."

The Citizens for Hospital Accountability organization also released this statement:

"Three years ago, representatives from Citizens for Hospital Accountability approached the District Attorney's Office and presented serious allegations regarding our Tulare hospital's management. It was our belief that criminal activities were occurring and we asked for an investigation by the District Attorney. Today, our initial efforts were finally legitimized in the filing of charges against Benny Benzeevi, Alan Germany and Bruce Greene. These three individuals did irreparable harm to our hospital, its employees and their retirement funds, its patients who trusted their health to this hospital, and the grieving families who have been devastated by the unnecessary deaths of their loved ones. Benzeevi infiltrated our community and wreaked havoc upon our citizenry with his blatant and brazen disregard for proper healthcare and for our district hospital. We are appreciative of the leadership of Tulare County District Attorney Tim Ward and his investigators, especially chief investigator Lindy Gligorijevic for her persistence and diligence and investigators Gregg White and Rodney Klassen, and Assistant District Attorney David Alavezos for their tireless work on behalf of our community. Over the past three years, they have methodically persevered to investigate the most complex case of white collar crime in Tulare County history. We look forward in anticipation to the day when justice will prevail, and to a time when Benzeevi, Germany and Greene will no longer be free to prey on other unsuspecting victims."
Report a correction or typo
Related topics:
tularecrimetularelawsuit
Copyright © 2021 KFSN-TV. All Rights Reserved.
TOP STORIES
Ex-Fresno police officer with links to Proud Boys sues City of Fresno
Fresno to require unvaccinated employees to test for COVID weekly
18-year-old arrested for deadly shooting at party in Reedley
3-year-old attacked by dog, hospitalized in Tulare County
Amazon driver tracks down California man's stolen truck
'Ample chance' of new COVID variant worse than delta, Fauci warns
11 killed, 13 injured when van crashed into pole near border, DPS says
Show More
Massive fire destroys 4 mobile homes near Pine Flat Lake
Downtown Hanford to get ice rink this holiday season
Semi trucks carrying grapes, tomatoes collide in Fresno County
Olympic gold medalist to buy food truck for her mom
72,000 US kids caught COVID last week, a 'substantial' spike
More TOP STORIES News