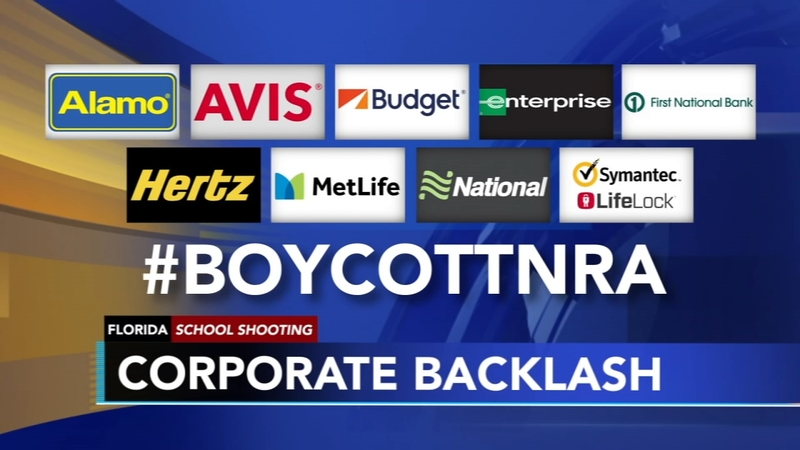 NEW YORK -- The National Rifle Association is facing a corporate backlash as companies take a closer look at their investments, co-branding deals and other ties to the gun industry following the latest school massacre.

A handful of companies have ended discount programs with the NRA as the group aggressively resists calls for stricter gun control after a gunman killed 17 people at a Florida high school last week.

The moves came as petitions circulated online targeting companies offering discounts to NRA members on its website. #BoycottNRA was trending on Twitter.

Members of the NRA have access to special offers from partner companies on its website, ranging from life insurance to wine clubs. But the insurance company MetLife Inc. discontinued its discount program with the NRA on Friday. Car rental company Hertz and Symantec Corp., the software company that makes Norton Antivirus technology, did the same.

"We have notified the NRA that we are ending the NRA's rental car discount program with Hertz," the company tweeted Friday.

Insurer Chubb Ltd. said it is ending participation in the NRA's gun-owner insurance program, but it provided notice three months ago. The program that provided coverage for people involved in gun-related incidents or accidents had been under scrutiny by regulators over marketing issues.

Those defections arrived after car rental company Enterprise Holdings, which also owns Alamo and National, said it was cutting off discounts for NRA members. First National Bank of Omaha, one of the nation's largest privately held banks, announced that it would not renew a co-branded Visa credit-card with the NRA.

Other companies, including Wyndham Hotels and Best Western hotels, have let social media users know they are no longer affiliated with the NRA, though they did not make clear when the partnerships ended.

The swiftness of the corporate reaction against the NRA has differed from that of past shootings, including the 2012 Sandy Hook Elementary School massacre that claimed 26 lives and the killing of 58 people in Las Vegas last fall, said Bob Spitzer, a political scientist at SUNY Cortland and a scholar on gun politics. Spitzer said the reaction was likely a reaction to the student mobilization that followed the Florida shooting, but he said it was too soon tell how significantly it will sway the country's wider gun debate

"If this is as far as it goes, it probably won't have any measurable effect. If other companies continue to (cut ties) it can start to have an adverse public relations effect," Spitzer said. "Usually what happens is that the storm passes, and the NRA counts on that."

Spitzer noted that it was not the first time big business has been pulled into the gun debate. In 2014, Chipotle asked customers not to bring firearms into its stores after gun-rights advocates brought military-style rifles into one of its Texas restaurants. A year earlier, Starbucks Corp. made a similar statement after the Newtown, Connecticut, shooting.

Larry Hutcher, an attorney who specializes in commercial law and litigation, said companies are reacting to a perception that public opinion is shifting on gun regulation. Polls show growing support for gun control measures, including 97 percent backing for universal background checks in a Quinnipiac University survey released Tuesday.

"It's based on the fact that these companies and their marketing officers are reading the tea leaves. It makes economic sense to get on the side of the majority of Americans," said Hutcher, co-managing partner of Davidoff Hutcher & Citron LLP.

President Donald Trump has aligned himself with the NRA, suggesting some teachers could be armed so that they could fire on any attacker. However, Trump has also called for raising the minimum age for purchasing semi-automatic rifles, a move the NRA opposes.

On Friday, a large Wall Street money management firm said that it wanted to engage with major weapons manufacturers about what comes next.

Blackrock Inc., which manages $6 trillion in assets, has become one of the largest stakeholders gun manufacturers like Sturm Ruger & Co., American Outdoor Brands Corp. and Vista Outdoor Inc. through indirect investments. The money is placed in index funds, so Blackrock cannot sell shares of individual companies within the index. Its fund clients invest in indexes that might contain companies like Ruger.

On Friday, spokesman Ed Sweeney said Blackrock will be "engaging with weapons manufacturers and distributors to understand their response to recent events."