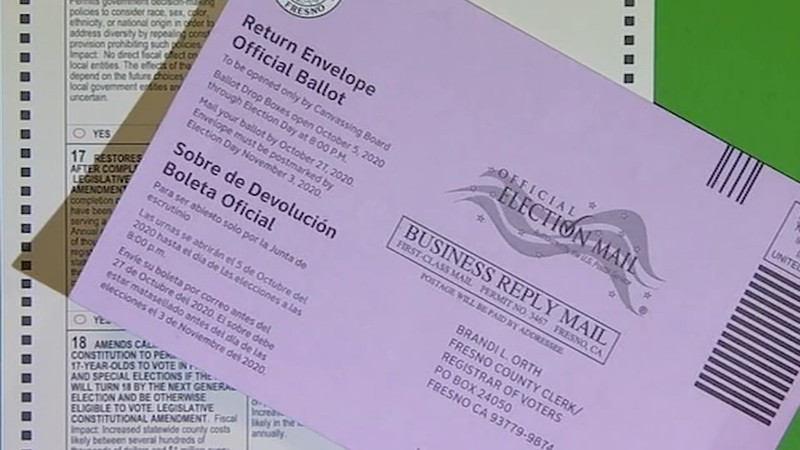 FRESNO, Calif. (KFSN) -- Ballots are arriving in the mail for almost every California voter this week for a presidential election expected to have the highest number of mailed ballots ever, so Action News dug into vote-by-mail ballots data, looking for evidence of voter fraud or other issues that could increase in the 2020 election.

Fresno County already had 86% of its March 2020 primary ballots cast in envelopes, but the coronavirus had barely arrived by then.

County election clerks are trying to make this election month as smooth as possible, but that also means they're ready to reject ballots to ensure a fair election.

But elections clerk Rebecca Martinez says those were returned by family members of the recently departed. They were not fraudulently cast ballots.

"We've not detected any of that whatsoever," Martinez said. "The ones we flagged are the ones that were actually returned to us unsigned."

Martinez says voter fraud has been extremely rare in her 30 years at the office.

But as a recent election approached, a conservative group gave her a list claiming Madera County voters included non-citizens, people they thought were dead, and double voters.

She did a random sample of the voters on the list and found no fraud.

App users: For a better experience, click here to view this map in a new window

"Of the people they said were deceased, they were not," Martinez said. "They were alive and well. Older, but alive."

Signature comparisons prevent impersonation fraud and that's the most common reason for ballot rejections. Fresno County rejected 797 rejected ballots in 2018, according to data submitted to the U.S. Elections Assistance Commission. Signatures that didn't match or weren't provided accounted for 774 of the rejections.

The state joins counties in tracking Voter IDs to make sure people don't try to cast ballots in two counties.

Several studies have found voter fraud does happen, but it's extremely rare.

"No system is perfect," said Keppler of the Maddy Institute. "There are going to be mistakes in every system. The question is 'Are they relevant? Is it statistically significant?' And the answer is no. There's been no data to support that whatsoever."

Two recent studies -- by Stanford and in Science Magazine -- have also shown increasing the number of people voting by mail doesn't favor either of the two main political parties.

The bottom line is, the earlier you cast your ballot, the easier it is to know your vote got counted. If you made a mistake, you have time to correct it, and you can track it through "Where's My Ballot?".