Dine and Dish: A taste of Basque food at Wool Growers in Los Banos 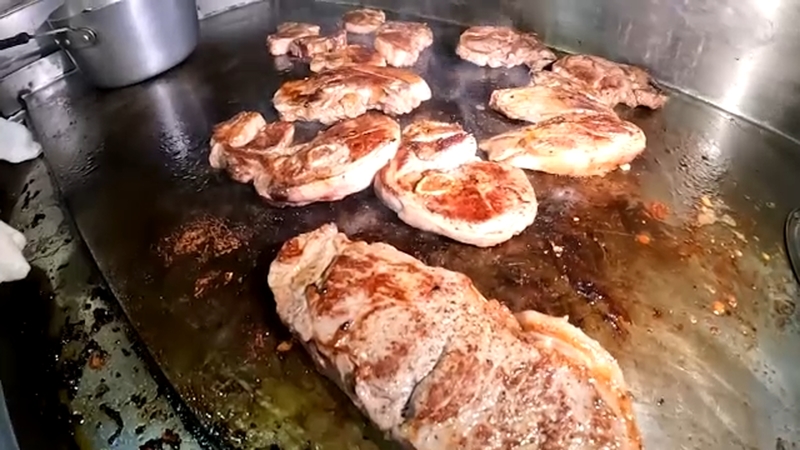 Dine and Dish: A taste of Basque food at Wool Growers in Los Banos

"They feel like they're coming to a friend's house," says Owner Ruth Reynoso. "That's what makes this place different."

"This is more French-style Basque, but the Spanish side of the Basque country, their food is so rich and I can taste it here," she said.

That taste even brought some guys in from Hollister.

"It is an extra special place," says Chuck Risner. "My favorite is Thursday because of the lamb shanks. Best I've had anywhere."

You won't forget these pigs feet.

Reynoso says traditionally, large servings were needed for folks who had been working all day on the ranch he said.

"There would be a lot of travelers and use this kind of as a boarding house," Talisa said.

Old hotel rooms have been elegantly remodeled and serve as spaces to hold gatherings.

We found a picture of a young cowbo at the bar.

"That was taken in the Azores when I was 12 years old," says Danny Fialho.

Ruth bought it seven years ago and knows the importance of keeping with tradition.

"It's like a responsibility to the community because this is like their place," he said.
Report a correction or typo
Related topics:
food & drinklos banosdine and dish
Copyright © 2022 KFSN-TV. All Rights Reserved.
DINE AND DISH
Dine and Dish: Heirloom in northeast Fresno
Dine and Dish: Ducey's Bar and Grill
Dine and Dish: Sweet treats at Eddie's Bakery Cafe in NE Fresno
Dine and Dish: Mike's Grill in Hanford
TOP STORIES
78,000 pounds of infant formula arrives in US
Fresno police catch suspect after he falls out of Save Mart ceiling
ABC30 editor spotted suspect in Fresno Save Mart, alerted employees
Woman badly burned after Hanford home catches fire
Fate of 2,500 Ukrainian POWs from steel plant stirs concern
Man drowns in Lost Lake in Fresno County
Hanford police officer, K9 hospitalized after exposure to fentanyl
Show More
Merced Co. offers free culinary classes for students of all abilities
Runner dies after collapsing at finish line of Brooklyn Half Marathon
First formula flights from Europe to arrive this weekend
Some peanut butter recalled for potential salmonella
Dog battles mountain lion to save owner's life
More TOP STORIES News