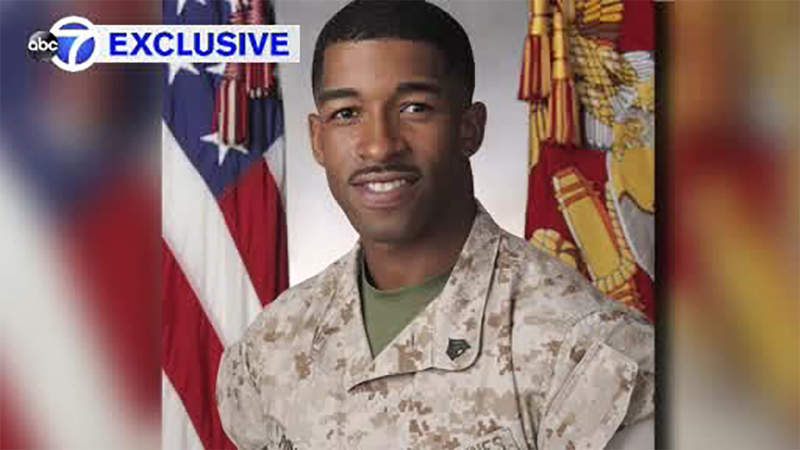 NEW YORK -- In an Eyewitness News exclusive, a Marine veteran is fighting for his freedom after his arrest on gun charges.

Even though the firearm was legal, it wasn't registered in New Jersey. Now he's asking the governor to step in.

No longer do you have to be in the process of committing a crime with a gun to end up behind bars, simply possessing an un-permitted gun in the state can make you a felon and a prisoner, even if you're like decorated Marine Sergeant Pompey.

When the military touts the few, the proud, the Marines, they probably had someone like Hisashi Pompey in mind.

Pompey served his country as a Military Police Sergeant in three tours of duty in Iraq and Afghanistan for which he received medals for bravery.
He has a beautiful wife and young children whom he may have to leave again, not to serve his country but to serve three years behind bars.

Six years ago during a visit to New Jersey, then Sgt. Pompey was at a Fort Lee nightclub when his friend got involved in a fight and grabbed Pompey's gun out of his holster and carried it into a confrontation with police.

No shots were fired. The friend was arrested but so was Sergeant Pompey. While his gun was legally registered in Virginia, he had no New Jersey permit. Police charged him with unlawful possession of a handgun.

"I'm not a troublemaker. I don't cause trouble. I don't do anything bad, it was just a common mistake that I made," said Pompey.

Next week, the former Marine Sergeant who has lost an appeal of his conviction must surrender to New Jersey authorities to begin a 3-year-mandatory prison term. His only hope lies now with one man, Governor Christie, whom Pompey has petitioned for a pardon.
"Only help I am asking for is from the Governor, that's the only one, everyone from judges to lawyers say the only person who will help me now is the governor," said Sgt. Pompey.

Governor Christie's office won't comment on Pompey's clemency petition. A spokesman told us, "As a matter of policy, the governor's office does not comment on or publicly discuss any such petition filed with the office."

"It's completely discretionary with the Governor. He doesn't have to say or do anything," said Sergeant Pompey's attorney Evan Nappen.

He says it's an absurd waste of taxpayers money to put Sergeant Pompey behind bars accomplishing nothing while ruining a good man's life.

"He goes into state's prison next week where he will do 3 years minimum, before he could even get parole," said Nappen. "This is a man who has done two tours in Afghanistan, a tour in Iraq. The only hope is for Governor Christie to exercise his power of pardon. Governor Christie in the past has stepped up and helped worthy individuals and it's my hope and prayer that he does the same for Sergeant Pompey."

If Governor Christie does not pardon Sergeant Pompey, he will have to surrender to New Jersey authorities on Monday.