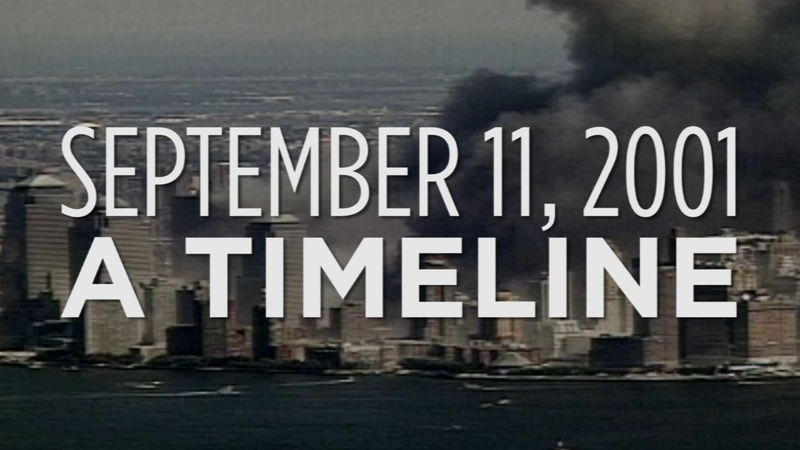 NEW YORK -- Here's how the 9/11 terror attacks unfolded on September 11, 2001, at the World Trade Center, the Pentagon, and on Flight 93 in Shanksville, Pennsylvania

5:45 a.m. - Hijackers pass through security in Portland, Maine, and board a flight to Boston, where they connect to American Airlines Flight 11.

7:59 a.m. - Flight 11 takes off from Boston for Los Angeles. Eleven crew members, 76 passengers, and five hijackers are on board.

8:15 a.m. - Flight 175 takes off from Boston for Los Angeles. Nine crew members, 51 passengers, and five hijackers are on board.

8:19 a.m. - Flight 11 crew members alert ground personnel that a hijacking is underway. Shortly before, one hijacker stabbed a passenger, Daniel Lewin, who was seated in front of him. Officials speculate that Lewin may have tried to stop the hijackers and was likely the first victim of the attacks.

8:42 a.m. San Francisco-bound United Airlines Flight 93 takes off at Newark following a delay. Seven crew members, 33 passengers, and four hijackers are on board.

8:50 a.m. - President George W. Bush is alerted. His advisors assume this is a tragic accident.

8:59 a.m. - Port Authority police order the evacuation of both towers. A minute later, the order is expanded to the entire World Trade Center complex.

9:00 a.m. - A flight attendant aboard Flight 175 alerts air traffic control that a hijacking is underway.

9:05 a.m. - President Bush learns that a second plane has crashed into the World Trade Center. Twenty-five minutes later, he addresses Americans, saying that "terrorism against our nation will not stand."

9:59 a.m. - The South Tower collapses in 10 seconds after burning for 56 minutes. More than 800 people in and around the building are killed.

10:03 a.m. - United Airlines Flight 93 crashes near Shanksville, Pennsylvania after passengers and crew storm the cockpit. Forty people on board, excluding the hijackers, perish.

WABC-TV engineer Don DiFranco was working at the Channel 7 transmitter site on the 110th floor of the World Trade Center North Tower when terrorists flew a hijacked American Airlines jet into the building on September 11, 2001.

12:16 p.m. - The last flight still in the air above the continental United States lands.

3:00 p.m. - A survivor, Pasquale Buzzelli, is rescued from the rubble of the North Tower.

5:20 p.m. - After burning for hours, 7 World Trade Center collapses, There are no casualties.

8:30 p.m. - President Bush addresses the nation from the White House, assuring Americans that a search is underway for "those who are behind these evil acts."