'I am so grateful': Amazon driver tracks down California man's stolen truck 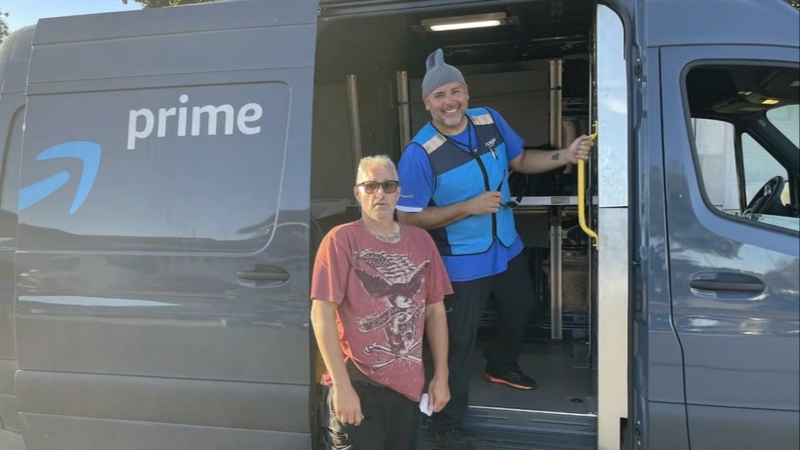 VALLEJO, Calif. -- An Amazon delivery person saved the day in Northern California when he found a stolen truck and trailer belonging to one of his customers.

You never know when an angel will pull into your neighborhood.
Mark Cutlip of Vallejo says his truck & trailer were stolen yesterday. When his Amazon delivery driver brought him a package he asked him to be on the lookout. Well Henry Martinez Jr. found em! Parked a 1/4 mile away pic.twitter.com/IerqKDWYev

Mark Cutlip says his truck and trailer were stolen Tuesday morning. He uses them for his new junk hauling business, Hauling Assistant.

"I called the Vallejo Police Department and a couple of friends who help me put in on social media," Cutlip said.

But then an Amazon delivery arrived at his home and he had an idea.

"I showed him a picture of my truck and trailer and asked him to keep an eye out for it and gave him my business card."

Tuesday night, he got a call.

"And he said 'are you the guy with the stolen truck and trailer?' And I said yes. And he says, 'I am your Amazon delivery guy and I am standing in front of your truck and trailer about a mile down the road," Cutlip explained. "I was ecstatic! I made it to his location in a couple seconds!"

Cutlip considers him an angel.

An Amazon delivery driver is being hailed as a hero after finding a Vallejo man's truck and trailer that had been stolen.

"You never know who is going to have the act of kindness in them and be looking out for someone else. The message is, higher power, prayer and power and there are still some good people out there."

The thief had stolen the catalytic converter. But Cutlip says at least he got the truck back. He just started his hauling business a few months ago.

"I saved every dime so I could get a dump bed trailer so I could make a legitimate career out of this, that is the goal. I wouldn't have been able to buy all this again. I am so grateful to God, to Henry Martinez, Jr. from Amazon," Cutlip said.

Our sister station KGO-TV reached out to Amazon for permission to interview Martinez or for a statement. He spoke with them by phone as the story aired Wednesday morning.

"We love hearing stories about drivers who go above and beyond for customers. We're inspired by Henry's actions and have celebrated him for his heroic actions. We're proud of the work drivers do every day while delivering for Amazon," the company said.

KGO-TV also reached out to the spokesperson for the Vallejo Police Department, Brittany Jackson, to ask about the investigation and the issue of catalytic converter theft, but Jackson did not return the call.

VIDEO: 'You guys paid for all this': Bezos' comments on Amazon workers after spaceflight draw backlash
EMBED More News Videos