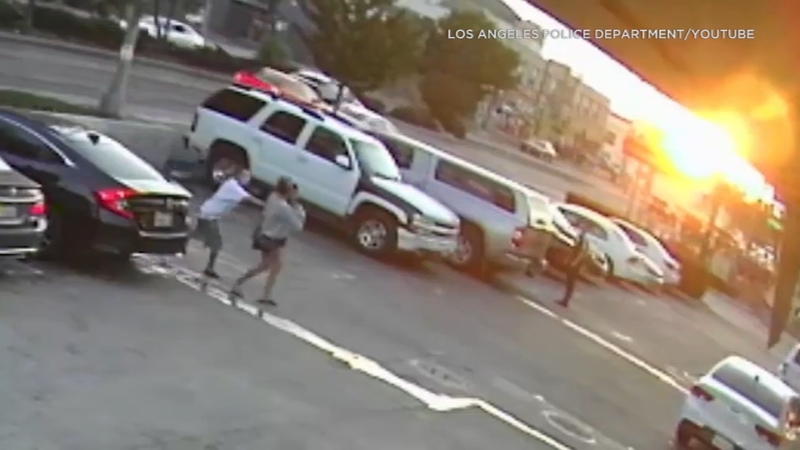 LOS ANGELES -- The Los Angeles Police Department is seeking the public's help in locating a woman who is wanted for two attempted kidnappings, one of which was captured on surveillance video.

Footage from Oct. 18 shows the suspect walking up to a woman carrying a child in a parking lot, police said in a press release. The suspect then demanded that the woman hand over the child, the victim's one-year-old brother, and "claimed he was her child," police said.

As the victim was walking away with the child, the suspect once again tried to take the child away from her arms before she ran back into a nearby restaurant to ask for help.

A Good Samaritan then approached the woman in the parking lot, prompting her to flee the scene.

Police say the suspect then made her way to the 8000 block of South Main Street and entered a gated apartment courtyard. The suspect grabbed a 5-year-old boy who was playing with a group of other children and tried to leave with him.

However, nearby family members thwarted the woman and stopped her from taking the boy.

"(She) was carrying him outside when the 15-year-old sister of this child said 'Hey, that's my brother.' The suspect then placed down the child and was dragging him by the arm," said LAPD Detective Liliana Preciado.

In both instances of attempted kidnapping, the suspect walked away on foot.

Preciado said the suspect seemed familiar to residents who spoke to authorities on the day of the incidents.

The suspect is described has having short cropped brown hair and is believed to be between 20 to 35 years old. She's approximately five feet six inches tall, weighing around 135 pounds. In the surveillance video, the suspect was wearing a white shirt, light green shorts and dark slippers.