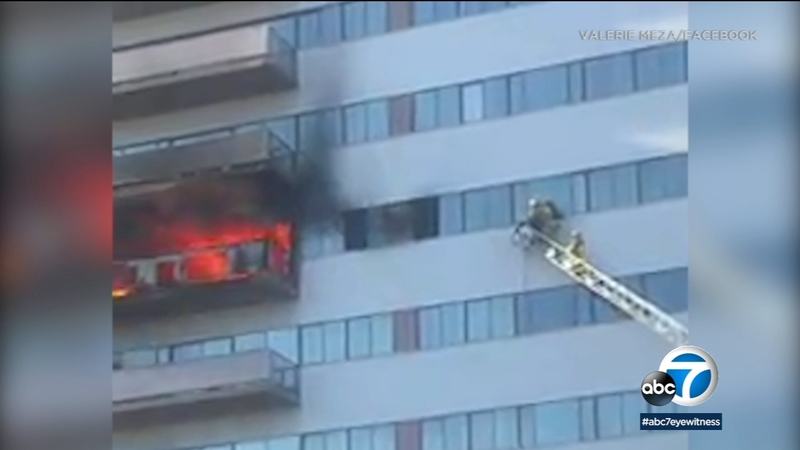 LOS ANGELES -- A dramatic fire erupted on the seventh floor of a high-rise apartment building on the Westside of Los Angeles on Wednesday morning, prompting a massive response from firefighters on ladder trucks and in helicopters.

The fire broke out shortly after 8:30 a.m. in the 11700 block of West Wilshire Boulevard in the Sawtelle neighborhood, according to the Los Angeles Fire Department. The fifth through eighth floors were affected by the flames.

Eleven people were injured, including a 3-month old child, LAFD Chief Ralph Terrazas told reporters at the scene. Most of those patients suffered smoke inhalation, and six were hospitalized.

Two firefighters were also injured, with burns described as minor but requiring treatment at local hospitals.

MORE: Woman recounts discovering her Westside building was on fire

Among them were two men, both 30 years old, who were listed in grave condition and critical condition, respectively.

There were 15 residents hoisted from the building.

Terrazas confirmed there were no fatalities in the incident, and that despite initial reports from witnesses no one had jumped from the 25-story building, which is not equipped with fire sprinklers.

One man was seen climbing horizontally across the facade of the 25-story building after crawling out of a window that was emitting an inferno of flames. He was later rescued by a firefighter who approached him from atop a ladder truck. That man was one of the two 30-year-olds in critical condition.

A man was seen climbing horizontally across the facade of a 25-story building after crawling out of a window that was emitting an inferno of flames Wednesday.

Some 335 firefighters were at the scene, supported by four LAFD rescue-capable helicopters, the LAFD said. Crews from those aircraft and a Los Angeles County sheriff's chopper were seen performing hoist operations, transporting to safety people who had made their way to the rooftop.

The cause of the inferno was deemed suspicious, and arson investigators were at the scene, officials said.

The incident was preceded by a 6:30 a.m. blaze that broke out at the construction site of another structure that was undergoing remodeling just three blocks away. One person suffered minor injuries in that fire. Firefighters later said they had determined the two fires were not related.

Fire department officials said the building was not equipped with sprinklers - and is not required to be. It is one of 55 high-rises in Los Angeles that were built before 1974 and are not required to have sprinklers.

The building was last inspected in June 2019 and was up to code, said LAFD Capt. Erik Scott. The building was red-tagged and closed to occupants overnight. Fire officials will re-evaluate in the morning whether it is suitable for habitation. The building owner was reserving hotel rooms in the area to help displaced residents.