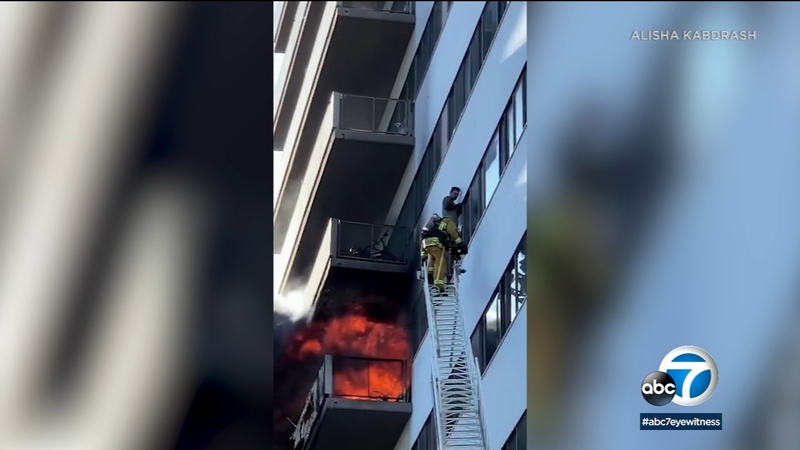 The man was among seven people taken to the hospital after the dramatic fire erupted on the seventh floor of the building Wednesday morning. Further details on the victim, who has not been identified, were not available.

Several people were injured in the fire, including a 3-month old child, LAFD Chief Ralph Terrazas told reporters at the scene. Most of those patients suffered smoke inhalation. Two firefighters were also injured, with burns described as minor but requiring treatment at local hospitals.

MORE: Woman recounts discovering her Westside building was on fire


There were 15 residents hoisted from the building.

One man was seen climbing horizontally across the facade of the 25-story building after crawling out of a window that was emitting an inferno of flames. He was later rescued by a firefighter who approached him from atop a ladder truck. That man was one of the two 30-year-olds in critical condition.

A man was seen climbing horizontally across the facade of a 25-story building after crawling out of a window that was emitting an inferno of flames Wednesday.

The cause of the inferno was deemed suspicious, and arson investigators were at the scene, officials said.

Fire department officials said the building was not equipped with sprinklers - and is not required to be. It is one of 55 high-rises in Los Angeles that were built before 1974 and are not required to have sprinklers.

The building was last inspected in June 2019 and was up to code, said LAFD Capt. Erik Scott. The building was red-tagged and closed to occupants overnight. Fire officials will re-evaluate in the morning whether it is suitable for habitation. The building owner was reserving hotel rooms in the area to help displaced residents.