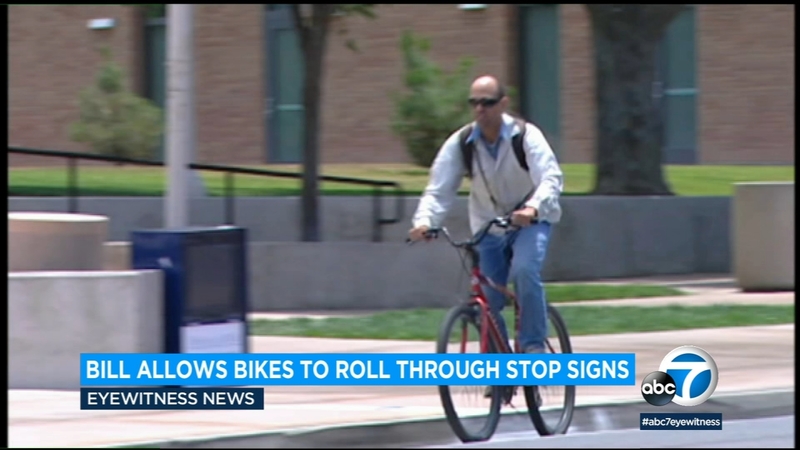 The bill's author says the policy has been shown to make biking safer in other states. By encouraging people to use bikes, it also aims to reduce vehicle emissions, said Assemblymember Tasha Boerner Horvath, D-Encinitas.

The bill only makes it OK for bicyclists to roll through stop signs when they deem it's safe to do so.

"We must encourage smarter, safer, more efficient transportation options that help people choose to get out of their cars. This cuts down on greenhouse gas emissions," Boerner Horvath said. "AB 122 encourages safe riding in our state by allowing cyclists to spend less time in dangerous intersections."

She said the policy has been put into place in nine other states and has proven successful in reducing crashes.

In Delaware, for example, state police observed a 23% drop in crashes at stop-sign intersections over the 30 months after the change took effect.

Under California law "A 3-sided red YIELD sign indicates that you must slow down and be ready to stop, if necessary, to let any vehicle, bicyclist, or pedestrian pass before you proceed."

An opponent of the bill said it would create confusion for motorists and noted that it applies to electric-powered bicycles which can travel at higher speeds.

"This to me is a very toxic bill," said Assemblyman Tom Lackey, R-Palmdale. "Because it has to do with public safety. It's going to create confusion for motorists. Not that they're not confused already."

If signed by the governor, the new rule would be a pilot effort in effect for six years and would then be reviewed.

The bill passed the Assembly 50-17 on Wednesday after already winning approval in the Senate and now heads to the desk of Gov. Gavin Newsom.