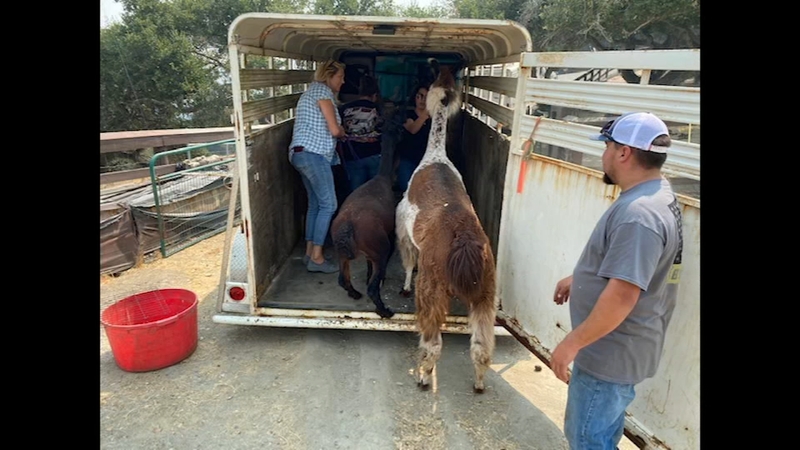 CLOVIS, Calif. (KFSN) -- As crews battle the rugged terrain and brave the elements to try and gain control of several fires burning across the State, one Clovis man is assisting the fight by offering to rescue animals and livestock threatened by the River Fire burning in Monterey County after families there were forced to evacuate.

Just as wildfires continue to rage in different parts of California and more families are forced to flee their homes, many leave without grabbing their four-legged friends. It's estimated thousands of animals and livestock have been left behind while their owners seek shelter

"If you're able to come help and have the experience like we do, how are you going to sit at home? You can't do that. You got to go out here and help these people. Help your friends and families," said Blake Cadigan.

Cadigan wasted little time hooking up his trailer and hitting the road to lend his support once fires began threatening homes. The owner of Evolution Quarter Horses in Sanger quickly assembled a team of volunteers to comb through the wildfires of Monterey County to rescue as many animals as possible.

He says in just the last three days they have been able to save more than a thousand of them, but there are still a number of animals out there.

The challenge Cadigan says is trying to get these animals of all different shapes and sizes to trust them enough to get on a trailer and leave their homes.

"The worst part is a lot of these animals have never left where they're at. Unless they're cattle of course or unless they're horses, the farm animals, the camel they don't get transported regularly like a horse," said Cadigan.

However, resources are running thin, as Cadigan and his team of volunteers are reaching into their own pockets to cover the cost of fuel and food for the animals.

"We got a good donation yesterday of a $1,000 and that's already gone. So we're paying out of pocket right now," he says.