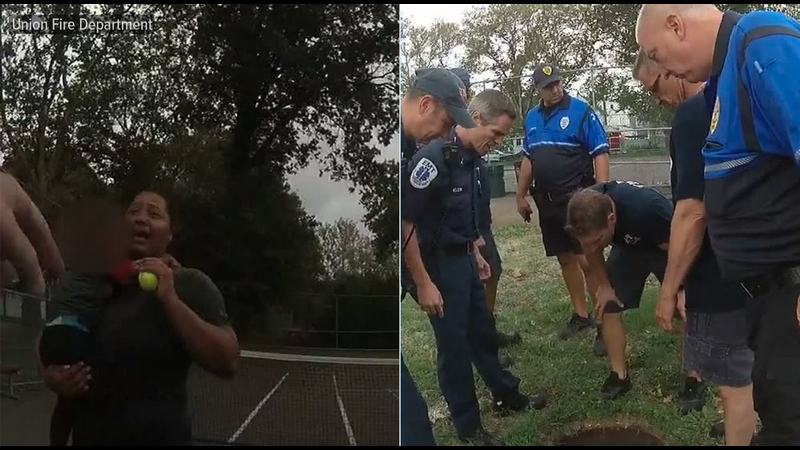 UNION, N.J. -- Newly-released video shows the moments after a quick-acting mother jumped into a manhole to save her 1-year-old son.

"He's not in there anymore. I got him out," the panicked mother is heard telling officers in the video as they arrive on the scene.

The mother, whose name has not been released, called 911 after she noticed her 14-month-old boy went missing at a Union, New Jersey, playground on Sept. 23 and found him inside of an exposed 7-foot deep manhole containing approximately 2 feet of sewer water. The waters were deep enough to reach the child's neck.

But while she was on the call, she noticed that her boy began to drift away. She then jumped into the hole and grabbed the child before water could sweep him down a tunnel and into an underground area that would have been too small to access.

"She put down the phone, jumped into the manhole and was able to reach him before he got to a part of the sewer that was too small for her to get into," said Anthony Schmidtberg of the Union Fire Department.

When emergency responders arrived on the scene, both mother and son were alert and conscious.

"He's not in there anymore. I got him out," the mother is heard saying in the video. "He's fine, but [the manhole's] open. Like really open."

They were taken to the hospital, but neither was seriously hurt.

Officials believe the manhole cover was displaced in the aftermath of Tropical Storm Ida and credit the mom for saving her son's life. Crews later inspected the park to make sure all manholes were covered.

"I think when your child is in a situation like that, you'll do anything possible to save them. It was more amazing that she was able to get them both out because there is no access ladder out there. She must've gripped onto the ledge and jumped out of there," Schmidtberg said.
Report a correction or typo
Related topics:
new jerseyplaygroundmanhole coverschild rescuechild rescuedu.s. & worldcaught on camera
Copyright © 2021 KFSN-TV. All Rights Reserved.
U.S. & WORLD
Omicron variant discovered in at least 7 US states
Study suggests past COVID infection may not fend off omicron
Burger King is returning the Whopper to its original price
IKEA staff, customers have sleepover during snowstorm
TOP STORIES
1 killed, 3 injured in Fresno County crash
Woman injured in crash down embankment in Fresno County
Hwy 152 in Madera County closed following multiple crashes: CHP
Fresno police reform: The department's new policies explained
Fresno family's apartment robbed after fire displaced them
US Marshals put up $10K to find parents charged in MI school shooting
Toys for Tots Marathon Weekend kicks off at River Park
Show More
Senator Padilla discusses infrastructure bill's impact on Central CA
Tulare County medical facilities receive millions in federal funding
Atwater woman receives national attention with Christmas lights
Hanford woman dies after being hit by truck
City OKs additional card rooms for Club One Casino
More TOP STORIES News