Evacuation orders lifted for all areas in Burbank; orders in Glendale to be lifted by 6p 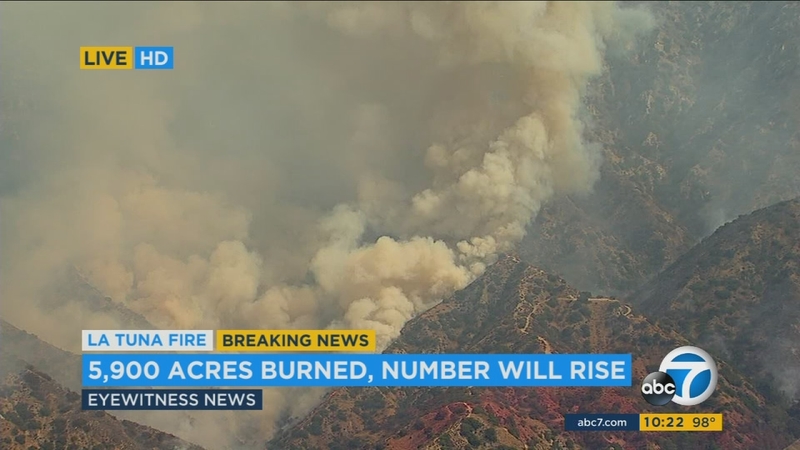 LOS ANGELES -- All evacuation orders were lifted Sunday for neighborhoods in Burbank affected by the La Tuna Fire, while orders in Glendale will be lifted at 6 p.m.

The La Tuna Fire has burned nearly 5,900 acres, and fire officials said they expect the acreage to grow.

Gov. Jerry Brown declared a state of emergency for Los Angeles County Sunday morning due to the effects of the blaze that burns near the Sunland-Tujunga area.

As of Sunday morning, the acreage stood at 5,865 acres, according to fire officials at a morning press conference. At one point, the fire was estimated at 8,000 acres, but later Saturday night fire officials issued a revised estimate.

About 1,400 people from the city were in temporary shelters, but 90 percent of them have gone back home as firefighters gained the upper hand on the blaze.

Brown's announcement said a Federal Fire Management Assistance Grant has been requested and approved due the fire's magnitude, which requires the "combined forces of a mutual aid region or regions to combat."

The declaration states the blaze is beyond the control of a single government and calls on state agencies to employ state personnel, equipment and facilities to help fight the La Tuna Fire.

The announcement comes after Los Angeles Mayor Eric Garcetti signed a declaration of emergency for the fire Saturday, calling on all the city's available resources to protect residents.

"The La Tuna Canyon Fire is an emergency that requires all available resources to protect our residents and keep our homes and other structures out of harm's way," Garcetti said. "We are grateful for the men and women of LAFD and all our partner agencies, for their heroic efforts to attempt to bring the fire under control and to keep people and their homes safe."

Garcetti's declaration calls on all city departments to take all necessary steps to protect life and property in the area affected by the fire.

The U.S. Federal Emergency Management Agency has already authorized the use of federal funds to help firefighting efforts.

FEMA provides Fire Management Assistance Grants which can fund up to 75 percent of eligible firefighting costs. Expenses covered by the grants can include expenses for equipment, materials, supplies and mobilization and demobilization efforts related to fighting the fire.

More than 1,000 firefighters from multiple agencies were fighting the flames well into Sunday. Weather conditions were better, with temperatures slightly dropping throughout the Southland. Area winds, however, were expected to be the "biggest challenge" for firefighters.

Fire officials said four people suffered injuries in the blaze, but two were severe dehydration, other had minor burns and one person had an allergic reaction to a bee sting.

A flash flood watch was issued for many Mountain areas, including where the La Tuna Fire is burning, as well as other recent burn areas.

The watch is in place until 10 p.m., the NWS said, adding that burn areas will be especially at risk for debris flows if thunderstorms continue to develop.

He said the winds had shifted several times during the day, making the fire spread in multiple directions and increasing the challenges for firefighters.

"We've increased the number of firefighters on scene," Scott said in a Saturday night briefing. "We have a very active fire that is spreading in multiple directions. However, we do feel we do have the appropriate quantity and type of resources on scene."

A helicopter also apparently went through some mechanical difficulties and made a precautionary landing at Verdugo Hills High School. No injuries were reported.

The windswept blaze was burning in heavy hillside brush in the Sun Valley and Sunland-Tujunga areas, and then moved over the hills toward Burbank late Friday night.

A smoke advisory was issued by the Los Angeles County Department of Public Health for the San Gabriel Valley to the San Fernando Valley and Glendale as plumes billowed into the air. Residents were urged to limit outdoor activities.

Patients of a Sunland convalescent home were brought outside in wheelchairs in case they needed to evacuate as the La Tuna Fire advanced.

Firefighters initially feared the flames would reach homes by midnight Friday. But the structure-protection efforts were able to hold off the flames until Saturday morning, when one home was lost near Verdugo Crestline Drive and Alene Drive in Sunland-Tujunga, officials said. Two other structures in that neighborhood were later destroyed.

Firefighters took the unusual step of keeping their water-dropping helicopters in the air at night, outfitting crew members with night-vision goggles. Officials said those goggles were purchased with funds donated to an LAFD foundation.

In other nearby neighborhoods, nervous residents packed up essentials but stayed near their homes and watched the flames with a mix of fascination and dread.

"It's actually really scary because we've never had a fire this close to us," said Tujunga resident Jessica Fernstrom.

The blaze was first reported Friday around 1:30 p.m. in Sun Valley. Firefighters initially thought they had a good handle on the blaze. It only burned about a quarter acre of brush as it moved uphill.

"It was actually traveling in a northern direction (and) hopped the freeway, and we were initially worried about the homes on the northern side," said LAFD Capt. Branden Silverman.

"But then we had that storm cell come through. We had a little bit of rain, and that was enough to push the fire in a totally different direction," the captain said. "It started traveling south toward the Burbank city limits."

The blaze had shut down the 210 Freeway in both directions, and fire officials said Sunday they would be reassessing the situation to consider reopening it by the evening or Monday morning.


During a Sunday afternoon press conference, the Los Angeles County Board of Supervisors plan to declare a state of emergency on Tuesday.

The flames and smoke did not immediately affect flights out of Bob Hope Airport in Burbank.

Los Angeles city and county agencies used water-dropping helicopters and Super Scoopers to help fight the flames from the air.