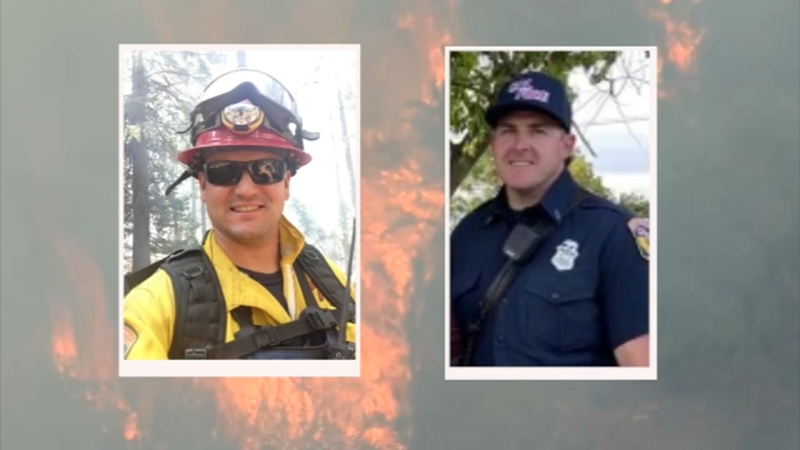 MADERA COUNTY, Calif. (KFSN) -- A suspected drunk driver ran a stop sign last night in the Madera Ranchos, slamming into the side of a Cal Fire engine.

Two firefighters were inside the overturned rig.

Tuesday, they were being praised for what they did in the moments after the crash despite being injured.

Investigators said a vehicle going eastbound on Avenue 13 ran a stop sign and hit the fire truck headed south on Road 36 after a training at a nearby fire station.

The engine veered off into a field before coming rolling over on to its driver's side.

"If he didn't do what he did, he would've hit my house," said Aaron Reaves.

Reaves lives right next to where the crash happened.

He said his wife heard the crash and woke him up.

Reeves saw the two firefighters, Engineer Parker and Captain James Kirkman, break out the windshield to get themselves out.

Parker was shaken up, but Kirkman was injured with a dislocated shoulder.

"It was definitely dislocated," said Reaves. "But he still ran over to try to help the other guy in the car out."

Reaves says Kirkman refused to sit down and the two firefighters along with a sheriff's deputy went over to help out the driver of the other vehicle.

Investigators have identified him as 57-year-old Daniel Higgins.

He was taken by Skylife to a hospital, where he remains in critical condition.

Officials said he is under arrest for driving under the influence.

"The first thing they thought of was to save somebody else, that's the epitome of a firefighter to me," said Batt. Chief Macomb.

Parker and Kirkman were both recovering at home Tuesday, but told Macomb, in a way, they were glad their engine got hit.

"They felt like they were almost a guardian angel, that they took the impact. It was a big fire engine but if it was a smaller vehicle, it probably would've been a lot worse," Macomb said.

The Higgins family sent a statement to Action News regarding the crash:

"We are thankful to the CAL FIRE team for their efforts to save Daniel's life and we are grateful that they are safe. Despite his battle with alcoholism, Daniel was a kind, funny and outspoken man. We ask that you please respect our privacy as we grieve the loss of our family member."