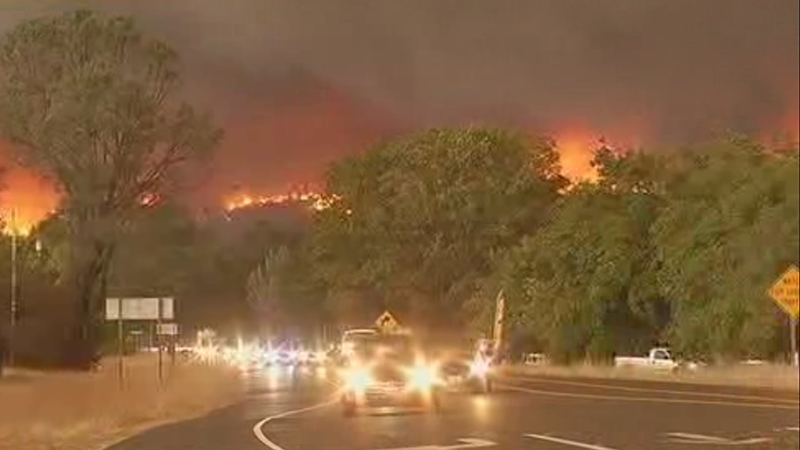 LAKE COUNTY, Calif. -- Cal Fire says the Valley Fire in Lake County has grown to over 25,000 acres burning homes, shutting down parts of Highway 29 and forcing the evacuation of nearby towns and more than 3,000 people.


Just In - The #ValleyFire in Lake County has grown to 25,000 acres. Hundreds of firefighters working throughout the night protecting homes.

The Valley Fire has hit Middletown. A school and several homes have been destroyed.

"Everything I've heard so far is everything behind the gas station is gone, the school is gone, the store is gone and a lot of people had dogs stuck up there," said Cobb resident Jamie Kelley.

"As we came down just fire everywhere and all of our houses our neighbor's houses, our friend's houses. Everybody's houses are burning up its awful," Joyce Reim, who also lives in Cobb.

Cal Fire says an unknown number of homes have been destroyed. There are also reports that Middletown Christian School was destroyed in the fire.

We had to evacuate. It was in my back yard 😭😭 #abc7now pic.twitter.com/mBaplybPRS

Middletown was where evacuees escaped to for Wragg & Rocky fires earlier this summer. Now it's hit by Valley Fire. pic.twitter.com/MAURjuQYaj

Middletown in Lake County is now under a mandatory evacuation due to the #ValleyFire. Hwy 29 now closed at Lower Lake to Middletown.

The evac center for people on south side of the #ValleyFire is in Calistoga at the Napa Co fairgrounds. @RedCross is setting up. #abc7now

Residents have been advised to gather their medications, pets, and important papers and leave the area immediately. If residents are evacuated they may seek shelter at the, Kelseyville Presbyterian Church, which is located at 5340 Church Street in Kelseyville.

An evacuation center has been set up for residents on the south side of the Valley Fire at the Napa County Fairgrounds in Calistoga.

"It looked like a sideways tornado the smoke was rolling across the planes," said Lacy Port from Lake Port, who had to escape.

"The pastures and cows and stuff were on fire. Their family owns a trucking company that has lots of chemicals on Socrates Mine road so that's not going to be good if the fire hits that," said Marla Ivans of Clearlake,

Cell service is spotty, which added to the tension as people desperately wait for news from loved ones.

More than 100 firefighters from Cal Fire and the South Lake County Fire Protection District are on the scene. Aerial resources are aggressively fighting the High Valley Incident that is burning at a moderate of spread in oak grass woodland.

Cal Fire PIO Daniel Berlant told ABC7 News that the dry conditions due to the drought are why these California wildfires are spreading so fast. He also said the extent of the injuries to the firefighter is not yet known.

Cal Fire said four firefighters suffered second-degree burn injuries and were transported to the burn center at U.C. Davis Medical Center. All are in stable condition. They were members of a helicopter crew based in Lake County.

President of CAL FIRE Local 2881, tweeted that he visited the for injured firefighters and said they are all expected to make full recovery.

Update on the 4 burned firefighters from the #ValleyFire. All suffered 2nd degree burns and are in stable condition at UC Davis Medical