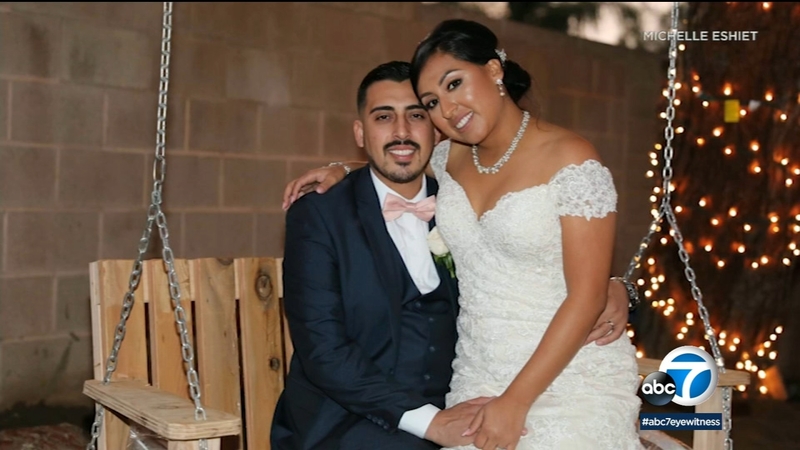 CHINO, Calif. -- Friends and family are mourning a 30-year-old Chino man who police say was brutally attacked and killed by two wedding crashers just hours after he got married.

Two brothers who live in the neighborhood, later identified as 28-year-old Rony Castaneda Ramirez and 19-year-old Josue Castaneda Ramirez, are accused of killing the groom after he tried to get them to leave the reception.

Joe Steven Melgoza, 30, of Chino, was found in the 13200 block of 17th Street after police responded at about 2:20 a.m. Sunday regarding a fight. Melgoza suffered blunt force trauma to his head and was transported to a hospital, where he died, according to police.

Up until that time, friends described the ceremony and reception as a wonderful, happy start to what was to be a new life for Melgoza and his bride. Melgoza also has an 11-year-old daughter from a previous relationship.

"Everybody was happy," said Red Valdovino, the couple's wedding decorator. "Come 4:00 all the guests came from the church and it was joy, just pure happiness."

Witnesses say the two brothers were at the reception late apparently looking for free alcohol when they were asked to leave.

The arguments turned physical. The fight spilled out onto the street and into a back alleyway.

When police initially responded to scene in the 13300 block of Oaks Avenue, they found a large crowd from the party and two victims of battery who had sustained minor injuries. They began searching for Melgoza after hearing from witnesses that another victim was missing. Police found Melgoza in the backyard of a residence.

Investigators were soon led to the two brothers, who live just down the block from the reception.

The two brothers were arrested and booked for murder and assault with a deadly weapon. They entered not guilty pleas in court on Tuesday. Their next court appearance is scheduled for Dec. 24.

Friends and family members are mourning the death of a 30-year-old Chino man who they say was killed hours after he got married.

Joe's bride Esther - now his widow - was there. Between tears, she related that she had still taken a nursing test on Tuesday despite her grief, because her husband had pushed her to work hard and achieve her dream.

"Today I passed my first semester," Esther said. "I know he wanted me to pass because he worked so hard."

She says in honor of late husband, she will do whatever it takes to become a nurse.

"We want justice for my brother and I hope these two individuals never see the light of day," he said.

Friends say Joe knew Esther's family since he was a teenager and her family is crushed by the loss.

"Wonderful family," Valdivino said. "They're a clean-cut family. They bring happiness to everybody. They're very pleasant and respectful."

A GoFundMe page has been set up to help with Melgoza's funeral costs.

"Joe was a loving son, brother, father, cousin, partner, family member and friend. He always had a way to make you smile. He was there for you at anytime to give a helping hand," the GoFundMe page stated.