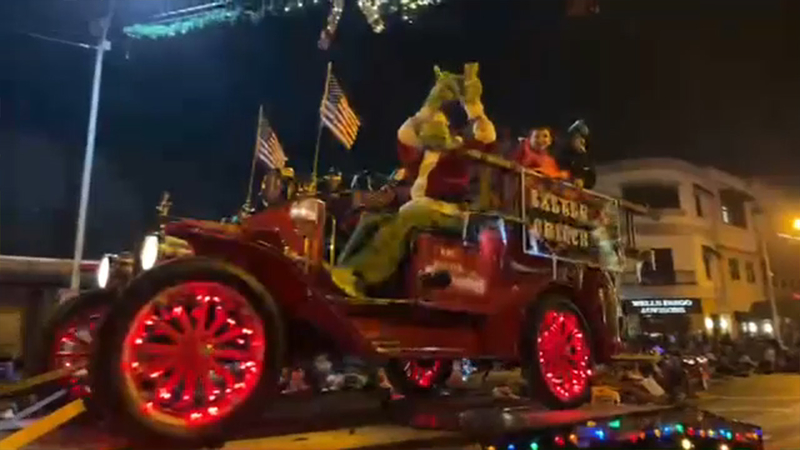 It's a night the CEO of Downtown Visalia says many people are looking forward to after COVID precautions led to a cancellation last year.

"It's like we are back where we should be," says Steve Nelson. "We have received a lot of calls, a lot of emails saying, 'Hey, we are happy to see the parade is going on.'"

The holiday festivities kicked off Sunday night with the lighting of the Christmas Tree at the oval.

Monday night, 75 floats will take part in the parade - making it one of the largest in the South Valley.

Seeing so many chairs out early on Main Street is a good sign.

Some local businesses will be open the entire evening selling goodies including coffee, hot chocolate, cookies, churros, and other items to keep the crowd warm.

Pam Steele and her family own Bee Hive Bake Shop and expect Monday night to be a big one.

"Hopefully exposure, because we haven't really advertised it a lot," she said.

Brenden Farrell with American Pacific Mortage says Monday is a tradition for their staff. They enjoy food inside the office and a front-row seat right outside for their families.

He and other business owners are hoping the same energy from previous years will be felt across downtown.

We also spoke to a gentleman who says his grandkids are in one of the high school marching bands and is excited to support them while getting into the Christmas spirit.
Report a correction or typo
TOP STORIES
Man charged with murder of 2-year-old whose father died a year earlier
How reliable are rapid tests? Dr. explains when to depend on results
Is there home appraisal bias in Fresno? Professionals weigh in
Housing Watch: Million-dollar homes at Ventana Hills in Fresno County
Valley Children's Hospital delaying some non-urgent surgeries
Good Sports: Fresno woman gains recognition with indoor rowing
Valley ag business continues to feel impact of supply chain issues
Show More
Family of 5 displaced after house fire in southwest Fresno
Merced police searching for missing 87-year-old man
Website for free COVID tests is here. How does it work?
Biden, 1 year in, says nation weary from COVID but in a better place
Man suffered severe burns after explosion at Table Mountain Casino
More TOP STORIES News