Charter boat captain recounts rescue of man stranded 36 hours at sea: 'It was nothing short of a miracle'

A search for six others aboard the capsized boat has been suspended.
ABCNews
By Bill Hutchinson 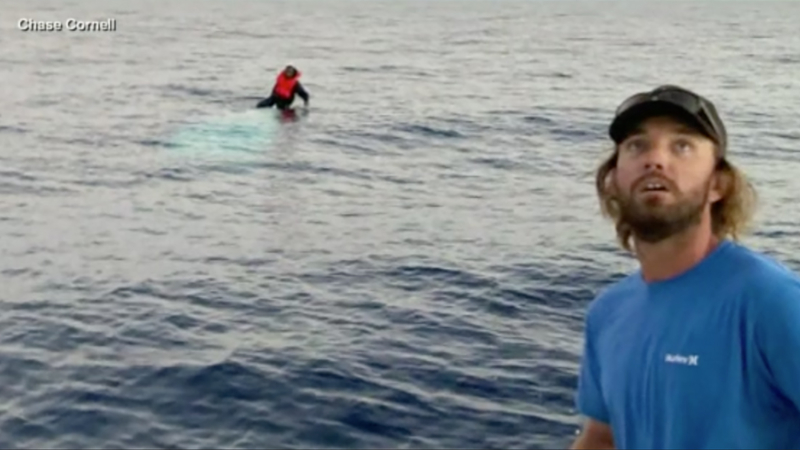 When Capt. Chase Cornell noticed a blip on the radar of the charter boat he was operating off the coast of Florida, he said he initially thought it signaled it was going to be a good day of fishing for his six passengers.

As he maneuvered his boat, dubbed the Southern Eagle, toward where the radar was directing him and instructed his crew to ready fishing rods to cast, Cornell said a chill went up his spine as he realized the blip in the Atlantic Ocean about 20 miles offshore from Fort Pierce, Florida, was a lone man clinging to the tip of a capsized vessel.

"For us to cross paths, it was nothing short of a miracle," Cornell told West Palm Beach ABC affiliate WPBF.

He said the early morning deep-sea fishing trip on Friday suddenly became a dramatic rescue of the stranded boater.

"As we got closer, I saw the gentleman raise his hand up and start waving at me," Cornell said. "And that's when I knew we weren't fishing anymore. We were actually there to rescue somebody."

Cornell said he immediately ordered his crew to put down the fishing rods and get up to the bridge.

"For a minute there I was thinking, 'This is very bad. There's no one around,'" Stuart Bee said.

Crew members Robert Lynch and Jack Hendrix said the sight of the castaway in the middle of the ocean will stick with them forever.

"Next thing you know, Chase is upstairs saying, 'It's a person! Help him! It's a person,'" Hendrix recalled in the interview with WPBF.

Lynch added, "You have to help. And that's just what we were doing."

Lynch said he grabbed a life preserver and tossed it to the man, who dove onto the ring.

Cornell and his crew said that when they got the man, who was wearing a life jacket, aboard their 18-foot boat, he recounted a harrowing journey that started in Bimini, Bahamas, two days earlier.

"I'm on the bow talking to him, and I got a little bit of brief information: how long he'd been out there if there were others or not," Lynch said.

He said the rescuee, a Jamaican national whose name has not been released, told the crew he was with six fellow passengers who remain lost at sea after they were all thrown overboard when their vessel flipped over in rough waters. Lynch said the man told him and his crewmates that he'd been in the water for about 36 hours and had drifted more than 100 miles north.

"He was very, very weak, so we got him a bunch of fluids, food, basically anything we could for him," Hendrix said.

Cornell said he and the crew, including boat owner Peter Busch, realized the man had also been floating in gasoline that leaked from the overturned boat.

"His skin was really burned. His clothes were soaked and drenched in gasoline," said Cornell, adding that he and his crew cleaned him up with soap and fresh water and wrapped him in blankets as they waited for a U.S. Coast Guard rescue ship to arrive.

The Coast Guard announced on Monday that it had suspended the search for the six people who were in the boat with the man. The Coast Guard said the lone survivor was recuperating at a hospital.

"The decision to suspend a search-and-rescue case is never one we come to lightly," Burdian said in a statement. "We offer our deepest sympathies to the friends and families of those involved during this difficult time."

On the same day the crew of the Southern Eagle rescued the man, the Coast Guard also launched a second search for 10 people believed to be Cuban migrants who were thrown off a 6-foot homemade vessel constructed of Styrofoam and wood. A good Samaritan boater discovered the empty makeshift vessel adrift off the Florida Keys.