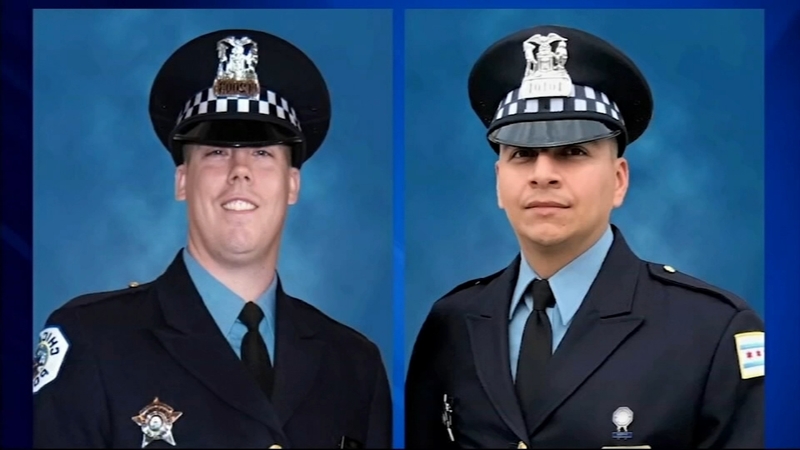 The St. Rita Shrine Chapel, 7740 S Western Ave., said it will host the funerals for Officer Conrad Gary this Saturday at 9:30 a.m. and Officer Eduardo Marmolejo's will also be held there on the same day at 12:30 p.m.

RELATED: What we know about the 2 CPD officers killed by a train

The officers were struck and killed by a commuter train in the Rosemoore neighborhood on the Far South Side as they were trying to apprehend an armed man.

Gary, who was a new officer, is survived by his wife and infant daughter. Marmolejo has a wife and three young children and he was also new to the force.

The St. Rita Shrine Chapel will host the funerals for the fallen Chicago Police Officers on Sat, Dec 22. Officer Conrad Gary will be 9:30am
& Officer Eduardo Marmolejo will be 12:30pm. Rest In Peace, CPD officers, and thank you to our brothers and sisters for their service.

Meanwhile residents in the Pullman neighborhood have been wrapping trees with bright blue ribbons.

"It's our way of telling the police officers here in the 5th District we feel your pain and we support you in this time of need," said neighbor Tim McMahon.

Chicago Mayor Rahm Emanuel spoke Tuesday at the 5th District after two officers were fatally struck by a train on the South Side.

"There's an impalpable pain and anguish in the soul of our men and women that we rely on and the family of the Chicago Police Department," said Mayor Rahm Emanuel.

Investigators said the two officers likely did not hear or see the train that hit them.