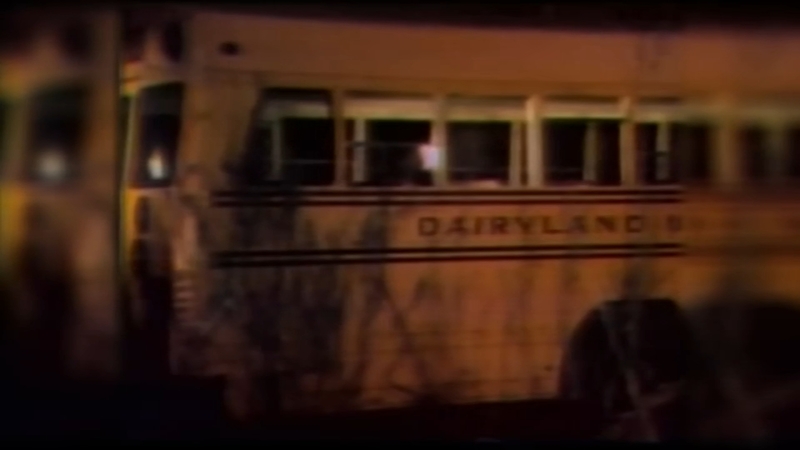 The Chowchilla school bus kidnapping that made headlines worldwide in the 1970s is now the focus of a research project by a group of local students.

The eighth-graders from Dixieland Elementary are collaborating with three other Madera Unified schools to write a book about Madera County's sheriffs and the crimes they investigated.

On Monday, the students boarded their own school bus to retrace the route the victims were forced to take more than 40 years ago.

The Berenda Slough just outside of Chowchilla is one of several significant sites the students visited, along with current Madera County Sheriff Jay Varney and former Sheriff Ed Bates.

Bates was in office when Fred Woods and brothers Rick and Jim Schoenfeld hid a school bus in the slough after kidnapping the driver and 26 children at gunpoint in July of 1976.

The victims were then forced into vans and driven to a quarry in Livermore, where they were buried in a box truck for 18 hours until they managed to escape.

Bates said, "It can be very educational for an old guy like me at 94 years old to be able to tell them firsthand what really happened because there's been all kinds of stories."

The students are now writing their own chapter about the kidnapping for a book that will be published in June.

To help with their research, they also traveled to the spot where the abduction happened and the Chowchilla Police Department to see a monument honoring the survivors.

Then they visited Edward Ray Park, which is named after the heroic driver, and they saw the bus itself at Brights Pioneer Museum in Le Grand. They asked several questions along the way.

Eighth-grader Liza Amezcua said, "It does give us a better understanding of what really happened. I feel like we connect more with our story."

Their teacher also has a personal connection to the case.
Angela Lindsay explaineds, "I grew up in Chowchilla. Many of the students who were on the bus, I either knew at the time or knew later in life."

Now she and both sheriffs hope this project will help preserve a piece of the past.

Sheriff Varney said, "Although it was an event that turned out well in the end, it was horrific while it was going on. It's still important for the younger generation to know that it happened."

Both Schoenfeld brothers have been released from prison, but Fred Woods was just denied parole for the 17th time in October.

For this book project, Lindsay says she would like to focus more on the survivors than the kidnappers.