Coroner's officials are working to notify the victim's family in Mexico.
KFSN 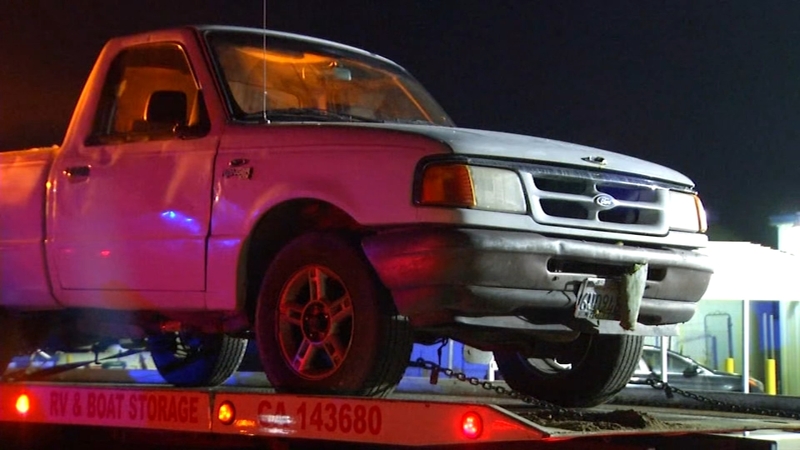 KERMAN, Calif. (KFSN) -- California Highway Patrol officers are investigating the death of a man after his own truck ran him over as a tragic accident.

The tracks left behind by the out-of-control truck are still visible in front of the Shasta Market in Kerman.

The clerk who was working at the time said the store's surveillance cameras captured the deadly encounter.

"I saw the car jump forward and go on top of him, the tires go forward to the street," said Abdullah Abdullah.

Just before the accident, Abdullah Abdullah said the victim was inside buying a few items. He was a regular customer who came in a few times a week to grab snacks and drinks. He was also known for not using a key to start his 1996 Ford Ranger.

Horrified witnesses watched as the truck that witnesses believe was left in gear slammed into the 61-year-old and then went all way across Whitesbridge Avenue before coming to rest in Carlos Rodriguez's yard, narrowly missing his house.

"I'm just glad that no one got hurt (on the road) with the truck coming this way," Rodriguez said.

The runaway truck was stopped but the wheels were still spinning in the dirt and the victim was across the street, lifeless.

"This is very unusual, we do hear occasionally about people working on their cars and then underneath jacks failing or something like that but for your vehicle to jump-start on its own and be in gear - it's very rare that something like this occurs," said California Highway Patrol Sgt. Matt Radke.