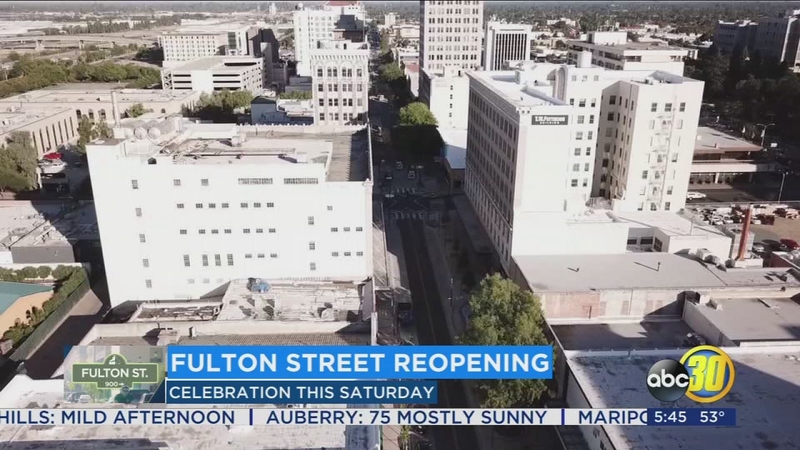 Below you will find info on the events going on during the Fulton Street grand re-opening celebration!

The City of Fresno is holding a ribbon-cutting ceremony this Saturday, October 21 to celebrate the completion of its Fulton Street Reconstruction Project, which will open up Fresno's most historic street to two-way traffic. The event will take place at 3:00 p.m. at the corner of Fulton and Mariposa, preceded by a procession of cars carrying VIPs to the ribbon-cutting. Immediately after the speakers' program, elected officials will participate in the ceremonial ribbon-cutting across Fulton Street. Following that, the VIPs will get back in the cars to complete their journey as the first vehicles to drive down the newly reconstructed Fulton Street.

Where: Corner of Fulton and Mariposa.

Draggin' the Main on Fulton Street

Throughout the 50's and 60's, young Fresnans spent their Friday and Saturday nights driving Fulton Street, or "draggin' the main," as it was known. Now, more than 50 years later, we are honoring this tradition with the Draggin' the Main Car Cruise during the Fulton Street Party on October 21.

There's a new district in town the Brewery District! We are excited to announce the first-ever opportunity to travel the Downtown Fresno Ale Trail. For just $20, you'll get 10 specialty tastings (two from each brewery on the trail) and an official Downtown Fresno Ale Trail souvenir tasting glass. Profits from this event will be used for future Ale Trail events and activations of the downtown Brewery District. See you on the Trail!

*Line up and schedule subject to change

Enjoy the Fulton restaurants you know and love, as well as restaurant pop-ups and a food truck pod (located at Fulton & Inyo).

We are still looking for volunteers to assist us with this event. If you would like to volunteer your time, please register here.
Report a correction or typo
Related topics:
community & eventsfresno downtownfulton mallfulton streetfresno
FULTON STREET