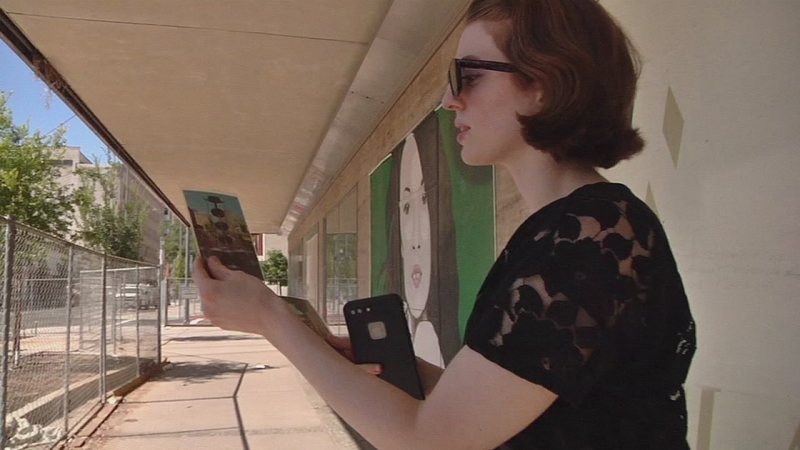 FRESNO, Calif. (KFSN) -- Inspiration comes in many forms and in all shapes and sizes.

"Whenever I'm doing something like this I'm always trying to figure out how I want it to work on a shirt," said artist Carl Herbert.

In this moment Herbert-- a 19-year-old artist-- is drawing from the heart of Downtown Fresno on what was a closed-off mall and what will soon be the newly, reopened Fulton Street.

"I wanna see it thriving again, I really do. I think that would be really cool."

That hope flows from Herbert's hand, down to a block of wood, and finally down to a shirt.

Herbert's been printing different designs for a year now in his mom's garage for his clothing line Urban Crow Apparel.

"You don't get the same thing twice, I really love that."

A popular one features an iconic piece of Fulton's skyline and Herbert is working on something new for the opening day.

"I feel like in some sort of small way, I've been able to have an impact on how people view Downtown Fresno."

"Very excited, I think it's a new generation for Downtown Fresno."

"To look back at photos, we can see what was and what can still be in the future."

A lot has remained the same but some things have moved a few feet. Veronica Stumpf has a collection of postcards from the past and we took a walk to map out the new locations for the sculptures that line Fulton.

"This fountain was smack dab in the middle, practically over here."

Like the others, Stumpf is invested in Downtown Fresno and she writes about it and posts pictures on "That Fresno Blog."

"It's one perspective I like sharing, it's my hometown."

Herbert feels the same way, "I like the history of it."

The history is the real inspiration-- shared memories of a once, popular place passed down to Herbert from his parents.

Herbert is part of a younger crowd with a love for this city-- encouraging people to give this place another chance.
Report a correction or typo
Related topics:
community & eventsfresno downtownartfulton mallsocial mediafulton streetfresnophotography
Copyright © 2021 KFSN-TV. All Rights Reserved.
FULTON STREET