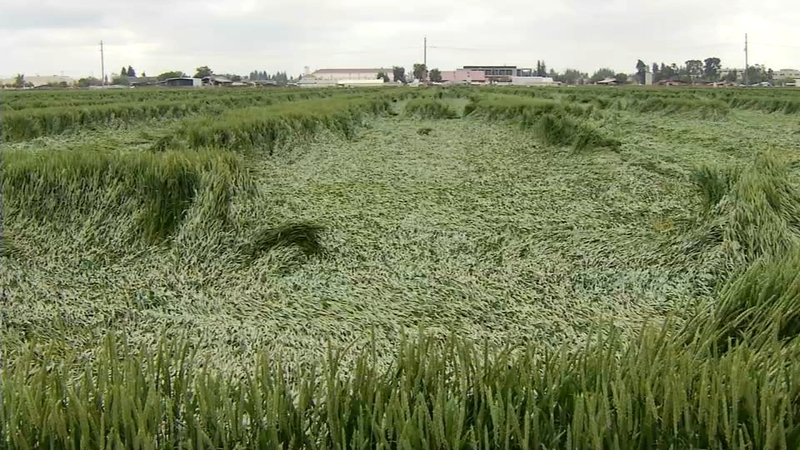 FRESNO, Calif. (KFSN) -- The storm knocked down a large portion of the wheat crop at Fresno State.

The effect almost resembles crop circles in some areas but this isn't wind damage.

Farm manager Rob Willmott was heartbroken to see 40% of his crop on its side.

"It, unfortunately, had a little bit more water in the soil and therefore wasn't able to stand up to that heavy rain that came in," he said.

The wheat was set to be harvested in two weeks but Willmott remains optimistic they'll still be able to save 90% of the 108-acre crop.

"Ideally, the sun comes out," he said. "The wheat is still growing and a large portion of it stands up. That's an ideal situation. That's what I'm hoping for."

A hailstorm in Selma left Sweet Thistle Farms with major damage to its flower crop.

"It was half-inch to dime-sized hail solid for 20 minutes," says Sarah Shoffner.

Many of the cut flowers Shoffner sells at farmer's markets were no longer recognizable.

"They had significant damage," she said. "There are broken stems, the flower and leaves are kind of taken off because of the hail that came down."

Shoffner says she's lost 80% of her spring flower crop, estimating damage in the tens of thousands of dollars.

But she keeps a positive attitude because the storm did bring some rain and snow.

"It'll be rough for a little bit but that's farming," she said. "It's a gamble. This kind of stuff happens."

The flower damage means Sweet Thistle Farms will have a very slow spring in terms of sales.